Now on their 28th party, AsylumLAN is currently the baby of Derek “Grymskull” Moore. With his organizational skills and his wifeâ€™s networking ability, the attendees of AsylumLAN 28 were greeted with a network ready to deal with the all that the weekend gamers could throw at it.

As people setup, I walked over to the swag table. LAN parties are fun, but the prizes are what bring the majority of the gamers back each year. Chiming in this year was a deep list of companies who gave to the cause, of these companies, Cooler Master, Gigabyte, Icemat, Ideazon, Steel Series, Antec, Ageia, FSP, Tagan and CoolIT all ponied up the swag and prizes. Sponsors were displayed well with posters in plain sight. 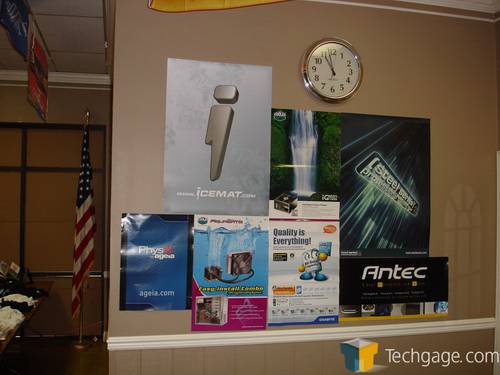 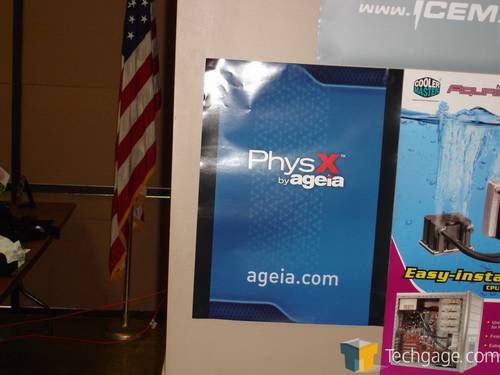 It should be noted that Ageia, Logitech and CoolIT all supplied prizes through Techgage and allowed us to provide give them away as we saw fit. These companies all deserve a visit or two to their website as they donâ€™t â€“have- to give anything out but they did.

To thank the three companies that provided us with gear, I raided the Techgage vault and decided to give them a bit of free advertising by using a few of the products that we have reviewed of theirs in the past. With my Ageia card installed, and the CoolIT Freezone humming away, I began to show off Cell Factor for anyone who was interested. 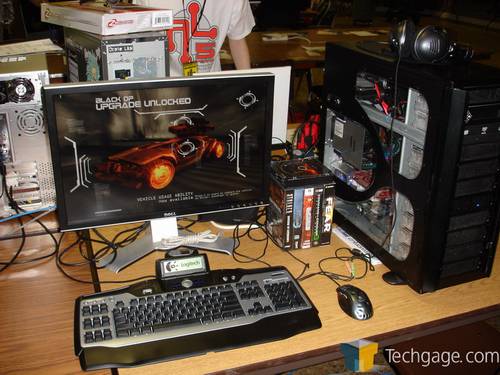 As stated earlier, many different companies helped out by donating prizes for the attendees. These items are incredibly important in spreading the word and getting new gamers to attend the next events. So much was donated that it had to be held on two separate tables. 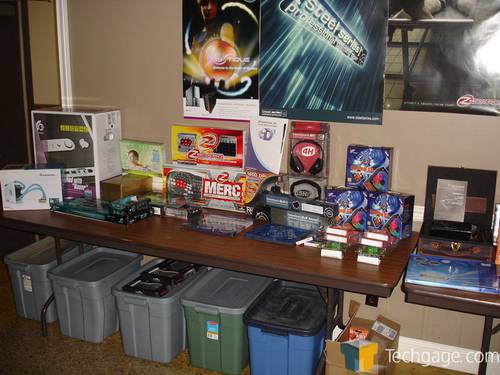 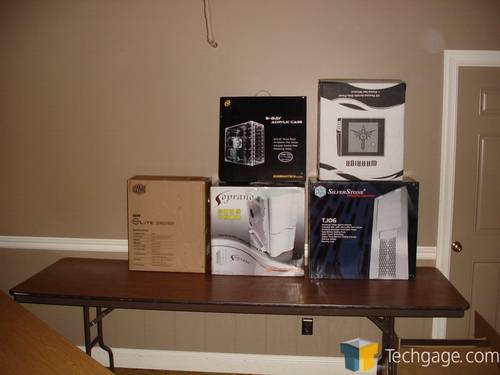 Not wanting to exclude the console players, there was a Wii and Gamecube setup for the younger attendees. Aside from that, what LAN party would be complete without DDR and Guitar Hero? I was glad to see this as Guitar Hero on any console is amazing but on the 360, itâ€™s deadly. 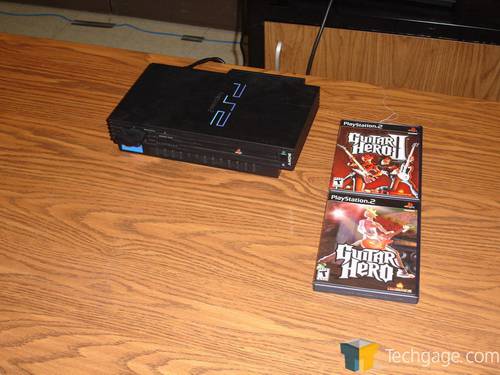 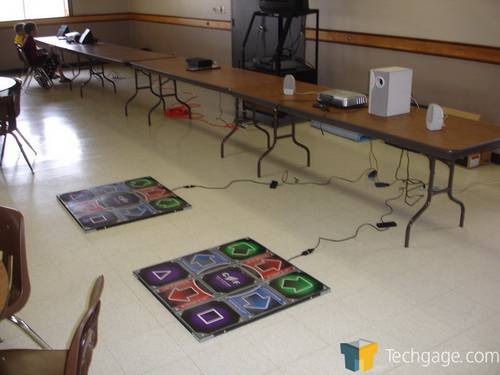 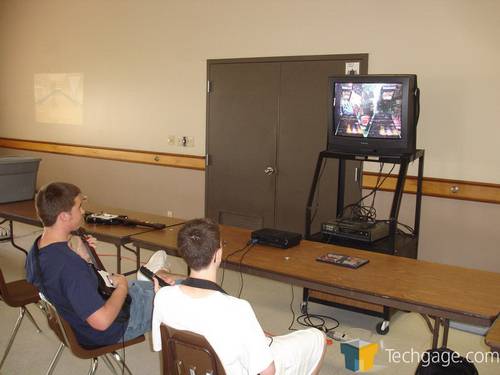 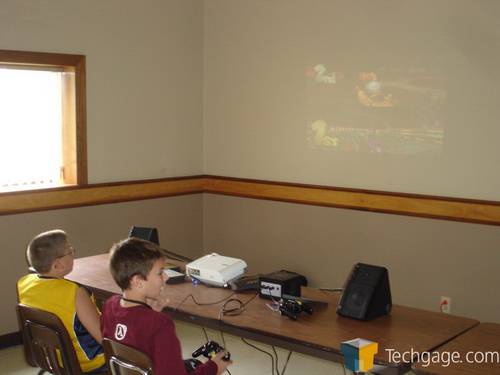 As the evening progressed, the first tournament was about to start. Unreal Tournament matches were about to kick off and with the flick of a switch, it was go time. There is something peaceful about the glow of a monitor screen and when there is over a hundred, itâ€™s downright beautiful. 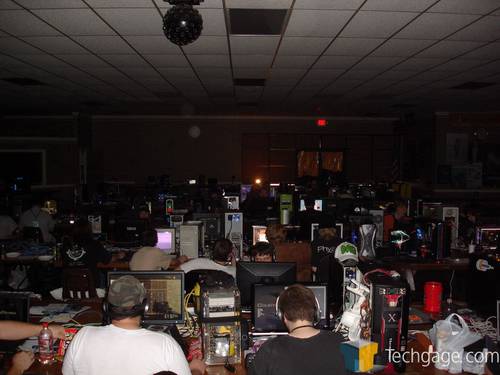 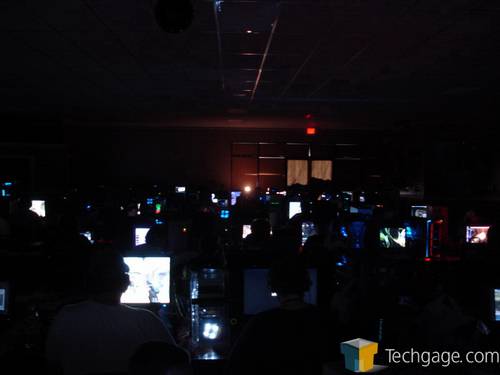 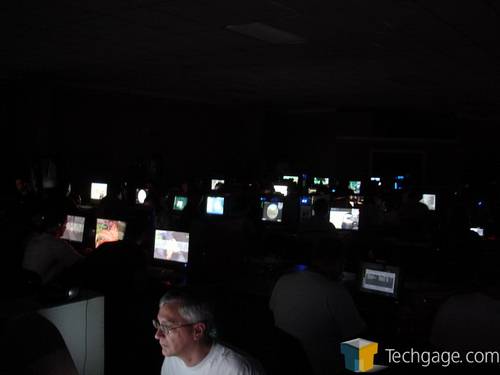 As the evening progressed, I received a phone call from home. Due to a family emergency, I was forced to pack everything up and head back up to Indy. Having talked with Derek since returning, as well as reading up on the rest of the event at www.AsylumLAN.com, the LAN party continued on without a hitch and finally wrapped up later the next day. While having to leave was unfortunate, I did enjoy the time I was at AsylumLAN this past weekend and urge anyone in the area to drop by their website and see what you think.

As the event progressed, there were more tournaments and activities held and undoubtedly, with Bawls in hand, fun was had by all. It was unfortunate that I was not able to cover the rest of the LAN party but sometimes things come up. Derek was a good sport about me leaving and reassured my that there would be an AsylumLAN 29 and on my way home, it finally hit me. Not many areas can pull of 29 successful LAN parties and under the guidance of Derek and his wife; the next AsylumLAN is all but inevitable.

Looking back, the beautiful thing about AsylumLAN was that almost everyone left with something. Regardless of whether it was a shirt, a pen or even something as large as a motherboard, the fact that there was so much to be given out really speaks volumes about the name that AsylumLAN has built for itself. Companies just donâ€™t come up off of hardware and swag easily.

They have to be confident that their products will be given out and will be seen by as many people as possible. There is also something to be said about the crown that attended this last LAN party. The crowd was polite and well behaved and there for one reason, to game. Whether you went home with a trophy, a shirt, or a video card, the greatest thing that everyone took away with them was a great set or memories.

If you have never experienced a LAN, consider yourself a gamer and live in the Kentuckiana area, AsylumLAN should be on your list of things to do the next time it rolls around. The next event is in August and should prove to be the best one yet. Barring anymore emergencies, Techgage will be present at the next AsylumLAN with more prizes to hand out, more stories to write and even more respect for the work that Derek, his wife and everyone will put into AsylumLAN 29.

Many, many more pictures from the event can be had on the next page.