It’s impossible to run an event like AsylumLAN without help and Derek certainly had plenty of it to go around, each dedicated in their own way. Once the staff recognition was out of the way, awards for tourney winners began. Each person received a trophy commemorating their victory and as you walked through the aisles, you saw that past winners brought their trophies with them to show off on top of their machines. There is a core crowd that keeps this LAN going and there isn’t anything wrong with showing off your past achievements. 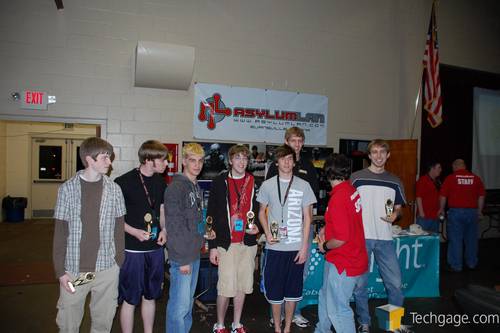 Also held were modding contest, both functional and ghetto. I was honored when asked to be a judge on this competition and in walking around, saw some really nice setups. There was an original Eee netbook that was taken completely apart and put back together with a very functional touch screen. We also saw a PC that would make even the most hardened gamer drool. With three or more video cards, not only did these users have the money to build nice systems, they also have the commitment and pride to do it right, managing their cables neatly and presenting very nice systems as evidence to their attention to detail.

The best mod of the LAN though was done the old fashioned way. With a dremel tool and pure ingenuity, this case would make our own Tech-Daddy proud. By removing sections here and adding section there, the case was truly unique and had a very clean look and feel to it. You could tell that time and effort went into this build. 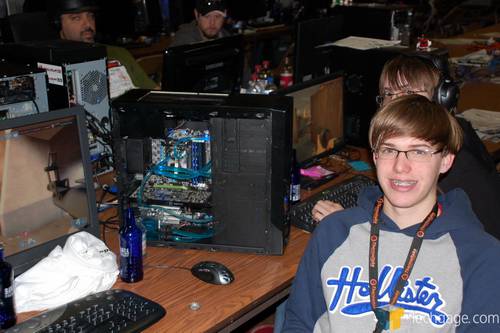 On the ghetto front, there were two entry, each extremely ghetto in their own strange way. One build took pieces from discarded systems, sometimes literally digging through the trash, and the final product was to say the least, ghetto extraordinaire. Another builder took a large section of open area in their case and places a holder for his Mountain Dew. While unable to keep them cool, this case did provide refreshment to even the laziest of gamers and able to hold up to four soda’s (or beer if you’re me). 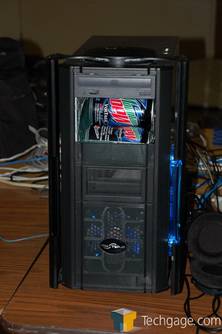 These kind of builds are always fun to see and speaking with the builders is an enjoyable time as well. They build these machines in their heads over and over until they go out and actually make it happen. In both instances, ingenuity prevailed and truly ghetto monstrosities emerged.

As more winners were announced, Rick and I both took pictures of the awards. These trophies will be displayed proudly at events to come and while not many will care outside of the LAN itself, inside, they demand respect. 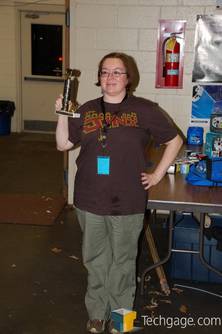 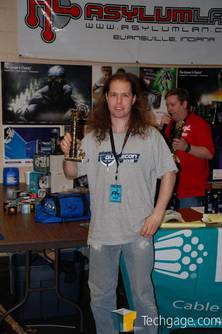 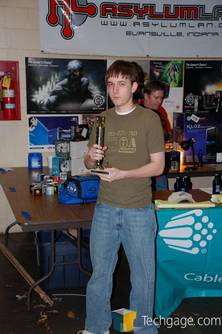 Once the awards were handed out, then came the swag. You can always tell when stuff is being handed out because it’s the one and only time that everyone will stop playing their games and hang out, hoping that their name gets called. The prizes ranged from Bawls and hats to one year subscriptions to CPU magazine and SilverStone cases. The grand prizes included power supplies and video cards graciously donated by BFG. 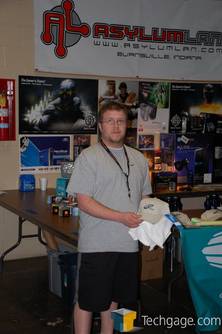 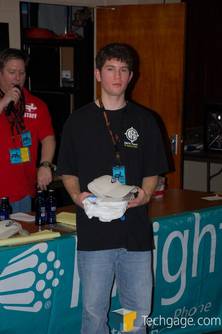 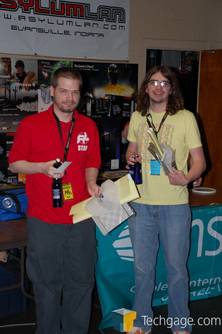 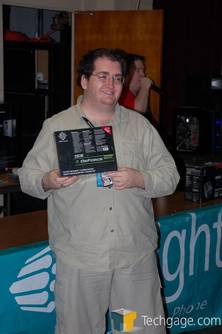 As the evening drew to a close, Iron Man was put up on the projector and people started making their way to their already made beds. The inflatable mattresses were blown up and ready to go for those that opted to bring their own but for me, it was a short drive to my cousin’s house where a comfortable couch awaited my short, 5 hour nap (we all lost an hour to daylight savings time… thanks for nothing time change). 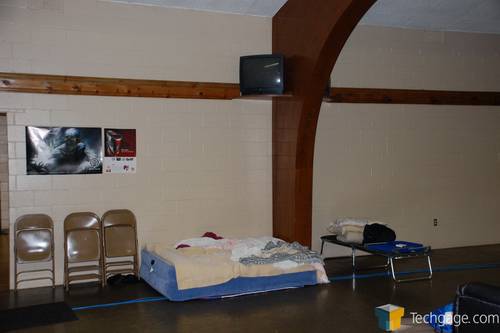 On Sunday, I got back to the fairgrounds as early as I possibly could so I could get in another few hours of gaming before we all had to make our way back home. As the event wrapped up with a Track Mania competition, I played my last few games of Call of Duty 4 until the gamers hosting the games finally had enough and shut down to leave. As I made my way around the room saying goodbye to my newfound friends, it was comforting to know that in a few months, we all would be back together again for AsylumLAN 34. Some of us will have different PCs and undoubtedly there will be new games but the most important thing for us all is that the people that we met would be back and ready to spend another weekend doing what we all love to do. Game. 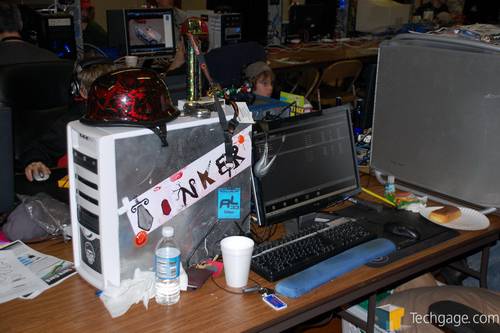 I want to thank Derek for once again inviting us down for what turned out to be a great time. There is a reason that AsylumLAN is as fun as it is and it starts with the dedication of Derek, his wife, Rick and the rest of the staff that made everything possible. They are a great group of guys and gals and I personally cannot wait to see them again in the summer. If you are interested, visit AsylumLAN’s web site and see when the next event will be.