Not to be confused with the general mass that floats around inside my head, Dead Space is a cross between Quake IV and Resident Evil, offering survival horror action that’s surprisingly great. In fact, almost all of the game’s initial reviews have praised the title for its story (rare to see), gameplay and overall experience. It might be a Resident Evil in space, but EA showed that they could still impress even in a relatively over-saturated genre.

The game is innovative in more than one way, with the main being the awkward view of the player. Rather than seeing the camera situated directly behind the player, it’s instead pushed slightly to the left, for more of an over-the-shoulder view. It’s odd at first, but after a while of playing, it grows on you. Another notable innovation is the absolute lack of a HUD, except when needed. Seems minor, but the experience looks far better without a HUD filling up a quarter of the screen. 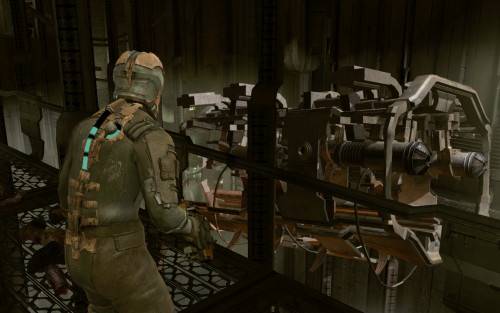 The level we use for testing is “New Arrivals”, which is Chapter 1 of the game. This is based off an NVIDIA-based saved game file that begins us 50 minutes in the game, and gives us a perfect opportunity to do a quick run through a certain area of the ship. No battles take place, but we do shoot a gas canister along the way, because after all, explosions are fun. 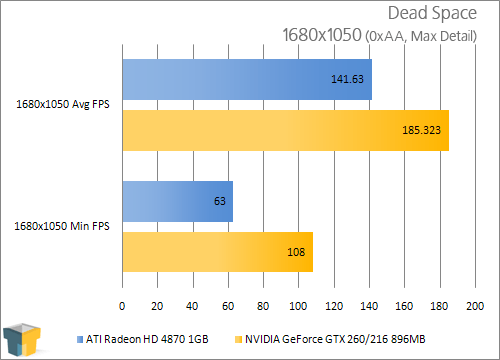 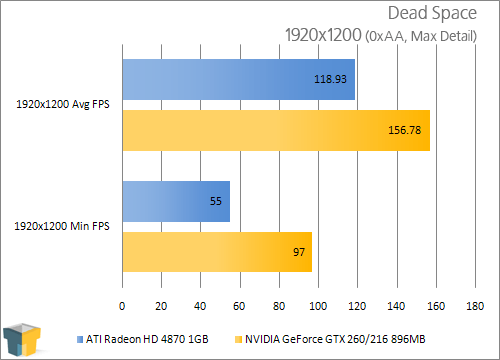 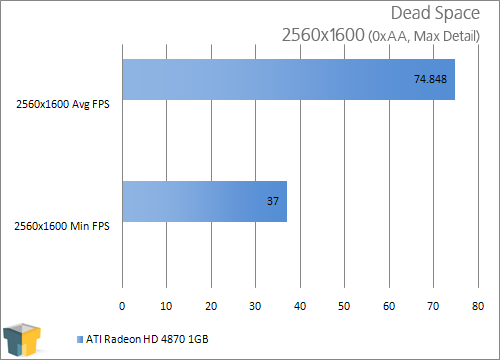 In the last article, NVIDIA dominated ATI in Dead Space, and not a thing changed here. It isn’t so much that NVIDIA had better results here, but the word “Domination” comes to mind. As I mentioned in the previous article, some oddity between the combination of our test monitor (Gateway XHD3000) and NVIDIA’s card didn’t work well. It’s not that 2560×1600 didn’t work on NVIDIA’s card, it’s that it wasn’t even a selectable option. Why it works with ATI’s card, I have no idea. I’m still researching the issue.

If there is one game that’s been hyped up this year for the PC, it would have to be Fallout 3. Building on the foundation that has captivated countless fans, the third game in the series instantly became a well-respected action role-playing game… a genre we rarely ever see great games from. Bethesda did a masterful job here.

It’s not often that a PC game gets released that delivers over 50 hours of gameplay, but this is one of them. In fact, if you beat the game in 30 hours, you probably didn’t play it right. I’ve even seen accounts people who’ve played it for 80 hours. Now that’s value! The game takes place in 2277, with you as a survivor of a nuclear ‘fallout’. Your father mysteriously disappears, and it’s up to you to find him. Along the way, you meet many friends, kick a lot of ass, and take in a world that’s very dirty, but still fun to explore at the same time. 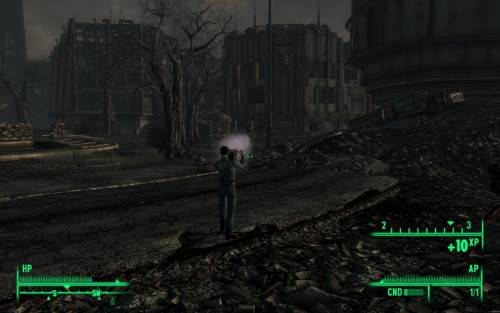 The area in the game we use for testing is Dupont Circle, and the test consists of a general walk through the area, with light combat along the way, in addition to a few good explosions… something there is a lot of in this game. You can see the heart of the area in the screenshot above. To make sure our character doesn’t die during the play through (there are a lot of landmines), we use God mode. 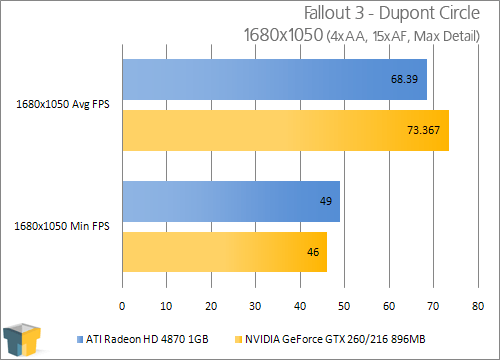 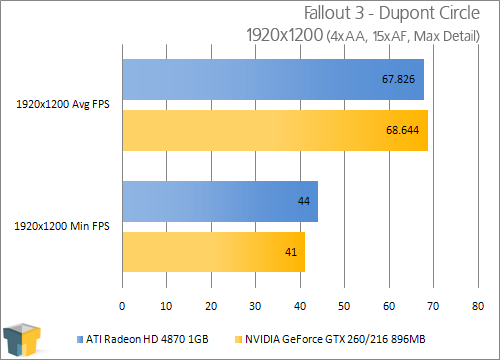 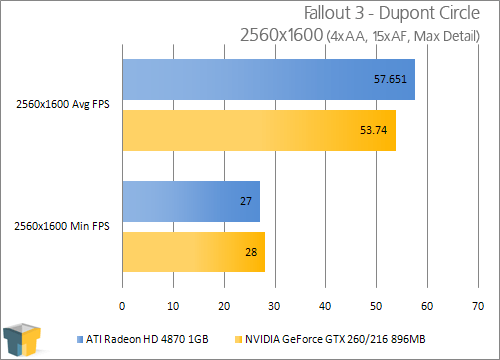 ATI’s driver improvements shine through here, but that in itself isn’t what’s so interesting about these results. Here, we see an odd effect where ATI’s card performed worse at lower resolutions, when compared to the opposing card, and vice versa at the high-end. When I noticed this oddity while preparing the results, I hopped back on the testing machine to retest both cards at each resolution, and the results didn’t budge. For whatever reason, ATI’s card performed better at the high-end, while NVIDIA’s performed better at the lower-end.