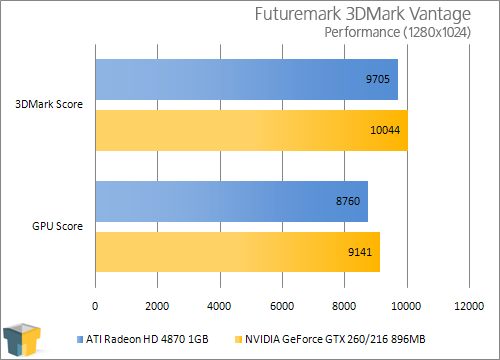 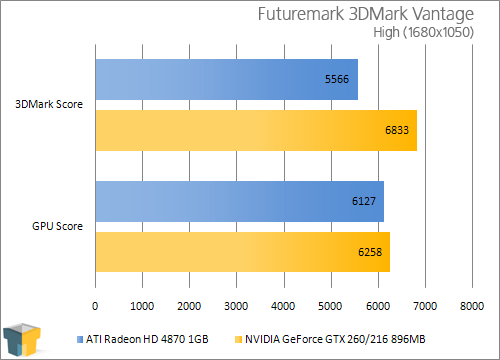 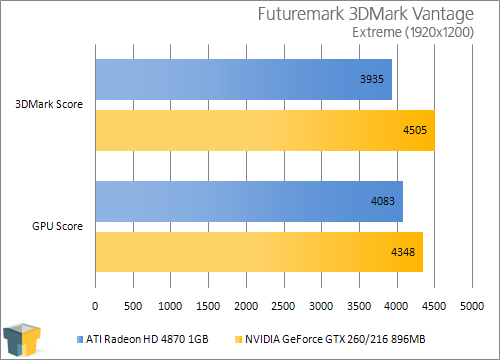 Although ATI’s drivers did manage to help the performance a little bit, 3DMark shows NVIDIA’s card to be at the top, especially as the resolutions increase.

Since we’ve had so many graphs already, the power consumption and temperature results are being condensed into this last one. For power consumption, we use a Kill-a-Watt that has nothing but the PC plugged in, while for GPU temperature tracking, we use GPU-Z, which does a fantastic job of exporting various bits of information to a clean text file.

To begin, the PC is left turned off for at least five minutes, and then is boot up and left to sit at the Windows’ desktop for another five minutes. At that point, both the idle wattage and temperature are recorded. To stress the GPU for load information, 3DMark Vantage’s “Extreme” test is executed at 2560×1600. The space flight test is used exclusively here in a loop of three, with the results being recorded during a specific sequence during the run where it seems to stress the GPU the most. 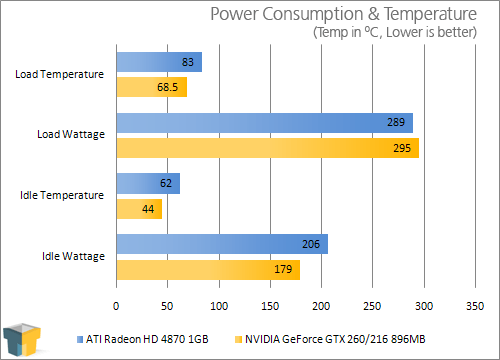 Overall, it seems NVIDIA’s card doesn’t just excel in performance, but in both power consumption and temperatures as well. It loses at full load, compared to the HD 4870 1GB, but given the performance has generally scaled beyond that 2%, it seems fair. Not to mention that the idle wattage (where the PC will likely sit most of the time) is 14.5W lower.