Before tackling our overclocking results, let’s first clear up what we consider to be a real overclock and how we go about achieving it. If you’ve read our processor reviews, you might already be aware that we don’t care too much for an unstable overclock. It might look good on paper, but if it’s not stable, then it won’t be used. Very few people purchase a new GPU for the sole purpose of finding the maximum overclock, which is why we focus on finding what’s stable and usable.

To find the max stable overclock on an ATI card, we stick to using ATI’s Catalyst Overdrive tool. Compared to the likes of RivaTuner on the NVIDIA side, it’s quite limited in the top-end, but it’s the most robust and simplest solution to use. On the NVIDIA side, we use RivaTuner, which allows us to reach heights that are in no way sane – a good thing.

Once we find what we believe may be a stable overclock, the card is put through 3DMark Vantage’s “Extreme” test three times. If the scores add up, we then load up OCCT 3.0’s GPU stress-testing tool for 15 minutes. If the card passes through both of these tests, then games such as Crysis Warhead are loaded up and played through for 15 minutes to rule out any instabilities. If a GPU is unstable, even in the most minor way, games like Crysis will halt within the first few minutes of play.

I had a big problem with overclocking both of these cards, but I’ll have to explain the situation to make sense of it. First and foremost, both cards overclocked like a dream… I was beyond impressed. So what’s the problem? Well, when trying to get a time-sensitive piece of content up as soon as possible, the last thing I want to do is spend hours on overclocking! But, our loss of time is your gain.

The GTX 275’s stock clocks are 633MHz Core, 1404MHz Shader and 1134MHz Memory. In the end, we found we were able to bump these to 730MHz Core, 1630MHz Shader and 1225MHz Memory and still retain full stability. Although both cards offered impressive overclocks, NVIDIA’s impressed me a bit more. An increase of 200MHz to the Shader cores is without question, impressive. I was actually skeptical that what I was setting was stable, but many run-throughs of levels in both Call of Duty and Crysis Warhead backed up the stability claims.

But the most important question remains… are these overclocks worth it? All results were gathered using the 2560×1600 configurations we used with each game throughout the article. 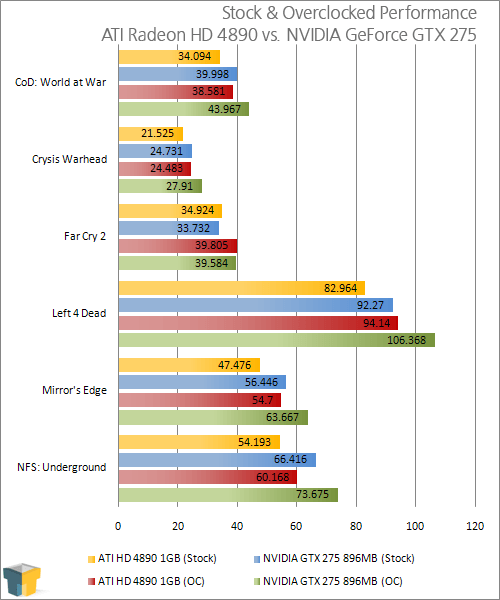 I admit that I don’t much care for GPU overclocking in general, because all too often all the OC does is add heat and offer a gain so small that it’s worthless. Although I feel the same for the most part about these results, both cards offered better than the usual results when overclocked. The ATI card saw a 4.5 FPS boost in Call of Duty, for example, and that’s fairly noticeable when you’re hitting low framerates like that (30 FPS is generally the limit for FPS titles).

Where the ATI vs. NVIDIA debate is concerned though, the latter cleaned house in all of the results here except for one, Far Cry 2. Both cards offered insane overclocking-ability, but the winner is obvious. All I hope is that the results on both sides are going to be representative of how retail cards will perform.