Like ATI, NVIDIA has had a busy few weeks, so before we look at the company’s recent announcements, let’s first take a look at the important part of the article, the GTX 275. Introduced as an in-between to the GTX 260/216 and GTX 285, the GTX 275 offers fast clocks at the typical mid-range price of ~$249. This card is of course designed to compete directly with ATI’s HD 4890, so instead of speculating which will come out on top, we’ll let the results on the following pages speak for themselves.

Interestingly, the GTX 275 doesn’t fall too far below the much-more expensive GTX 285. While the GTX 285 has a Core clock of 648MHz and Shader clock of 1476MHz, the GTX 275’s has its clocks dropped to 633MHz Core and 1404MHz Shader. What does this say? Well, it looks like NVIDIA really wanted to compete, and didn’t mind taking away from GTX 285 sales.

There’s potential here for an obvious winner: gamers. Although the clocks on the GTX 275 are noticeably lower than the GTX 285, we’ve come to expect quite a bit in way of overclocking from NVIDIA in the past, and I have doubts that every-single launch GTX 275 wouldn’t be able to hit GTX 285 speeds. That makes the GTX 275 just a little more desirable – not to mention a great value. 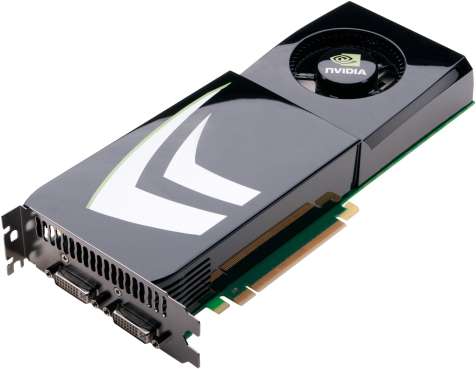 Like the HD 4890, NVIDIA has said that their card will retail for $249, and so far, we can see that we are coming close, with Newegg’s listings showing $259.99 (although none are in stock). Like NVIDIA’s other single-GPU cards, this one uses two PCI-E 6-pin connectors and has a max board power TDP of 219W. In addition, the memory configuration is slightly tweaked from the GTX 285. Instead of a 512-bit memory bus and 1GB of GDDR3, we see a 448-bit bus and 896MB of GDDR3.

I’ve pretty well said everything that can be said about the card, so let’s move right along into what else NVIDIA has been up to. As mentioned in our news last week, the company unveiled their APEX technology during the Game Developers Conference, and though I’m not a developer, much less a game developer, this is one piece of technology that does seem to hold real potential, at least, as far as PhysX is concerned.

Although our mention in that post was quite brief, APEX is actually pretty cool in both its design and goals. NVIDIA recognized the fact that most game titles are built with far more artists than coders (no surprise), so APEX makes it easier for those artists to get become a larger part of the development process. As the example in the news post showed, the developer could essentially take a tree, make it explode, and tweak it as necessary in order to match their vision. It’s an interesting tool, so we’ll just have to sit back and wait to see how successful it will be.

During NVIDIA’s own conference call, Ambient Occlusion was again a topic of definite interest. Given that both ATI and NVIDIA spoke so highly of it, it’s bound to catch on. Although both manufacturer’s cards are said to offer near-identical results, NVIDIA has an added benefit of being able to add support to games that don’t natively offer it. Their prime example was Half-Life 2, and as a five-year-old game, it’s no surprise that it’s not supported. Thanks to an added control inside of the NVIDIA Control Center, though, you can enable it in any title and hope for the best.

Some examples of forced Ambient Occlusion are shown in these screenshots:

The topic of PhysX is one that’s never far from NVIDIA’s mouth, and the call last week was further proof of that. Exciting things are happening with the technology, and developers continue to pile on and claim support. Not too much in way of actual game titles were announced, but the company did toot their own horn for there being over 100+ games currently on the market to support it (including consoles).

This year, there are a few noteworthy games due to come out that will support the technology, from MKZ, a first-person shooter, to Star Tales, a game I’m not too familiar with, but does a good job of making me wonder about the potential of breast physics. In addition to future titles supporting the tech, NVIDIA also pointed out that patches exist for games like Sacred 2 to open up the support (and the results look quite good, actually).

Past PhysX, they talked a bit more about CUDA, and what applications are now available. Aside from Badaboom, which has become a standard in the discussion of CUDA, they also mentioned MotionDSP’s vReveal, a program we talked about briefly in our news last week. This application aims to take your shoddy-looking videos and improve them, a la CSI-style. It holds real promise, but as others have learned, it also has a few serious limitations. 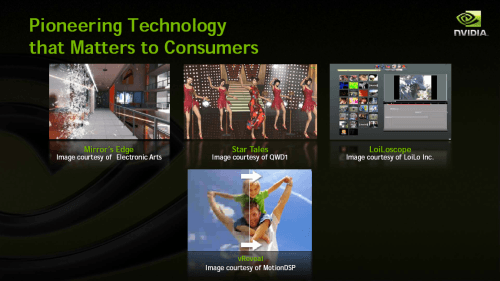 I could write more about what NVIDIA discussed and showed off, but really, this article is about two graphics cards, so I’ll wrap this up. The last notable thing NVIDIA unveiled was their third power pack, which is available right now. In this one, you’ll be able to download the Sacred 2 PhysX patch, a benchmark demo of Star Tales, a PhysX screensaver (complete with source code), a trial of vReveal and a GPU-accelerated [email protected] client.

Both ATI and NVIDIA have been up to lots over the course of the past few weeks, and boy, has it made more work for editors! So finally, let’s get to the real good stuff… our test results. On the next page, we have our test rig and methodology, and afterwards, we’ll get right into Call of Duty: World at War.