When AMD released its RV700 series of graphics cards last summer, the world had no choice but to be wowed. The company saw a relative drought for the few years prior to that launch, and some began to wonder if the acquisition by AMD ended up doing more harm than good for ATI. Well, that launch proved the opposite, because you have to imagine that even NVIDIA was taken by surprise. Most of us were proven wrong, and it couldn’t have been more sweet.

Since both AMD’s and NVIDIA’s GPU launches last summer, though, the graphics card scene hasn’t been too interesting. We’ve seen many launches, but for the most part, it’s been a rehash after rehash… downclocked or overclocked parts. But last month, AMD shook things up once again with the unveiling of its Evergreen architecture, and the first cards to use it, codenamed Cypress.

It’s true. As enthusiasts, we dealt with a lack of exciting GPU launches for almost a year-and-a-half, and then AMD delivered a feature-rich architecture and cards about twice as fast as the previous generation. Thanks to the Terascale 2 engine, both launch cards are capable of huge compute performance… upwards of 2.72 TFLOPS. To put that into perspective, when the HD 4000-series launched last summer, we finally saw the 1.0 TFLOP barrier broken on GPUs… and here, we’re almost triple that. 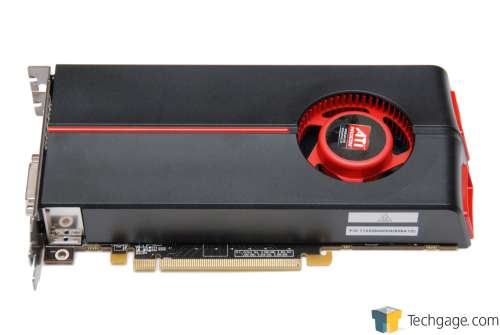 Compared directly to ATI’s last-generation cards, Cypress offers twice the number of stream processors, ROPs and texture units, which in layman’s terms essentially means twice the compute power. In addition, restructuring was done to maximize the efficiency between all of the components, from how the texture units fetch their units from the SIMD, while also seeing the addition of multiple memory controllers to reduce bottlenecks as much as possible.

Of course, what ATI boasts most about on its Evergreen cards is the addition of DirectX 11 support, which the company is highly optimistic about. Although I feel like it took forever for DX10 to gain any traction at all in the marketplace, I have high hopes for DX11 based on the demos I’ve seen in recent weeks. Tessellation in particular is one addition to DirectX that’s rather impressive, as it allows for more realistic models without the expected performance hit.

Other key DX11 features include DirectCompute 11 (including support for OpenCL), improved shadowing techniques, HDR texture compression, some physics acceleration, multi-threading, and one of my favorites, order-independent transparency. OIT, simply put, allows for semi-transparent objects to be overlapped without being sorted first, which means performance won’t be affected. Scenes will also appear more realistic, with the best example I can give being a scenario where you are looking through a glass window and also the growing smoke cloud outside it. Typically, game engines will need to sort these layers to figure out the best end-result, but with OIT, no sorting is required… it’s done automatically, and the result you see is hopefully ideal.

Why am I bothering to rehash all of this? It’s because both the HD 5770 and HD 5750 support every-single feature that the high-end launch cards do, so aside from performance, you lose nothing. It’s also interesting to note the fact that AMD is releasing these cards so fast. It’s rare to see any company release a product, then release a scaled-down version mere weeks later, but that’s just what happened here. It’s not as simple as tweaking something and releasing it as a new product… these are essentially altered Cypress chips, so the turn-around time is incredible.

This is one thing that AMD enjoys boasting about, and arguably, they have the right to. The company’s Evergreen-based launches aren’t quite over, as Hemlock, the “X2” card, is due within the next few weeks as well, and the lower-end Redwood and Cedar (fairly difficult to figure out this codename theme, huh?) are due in Q1 2010. AMD has been busy, it’s as simple as that. So, with that said, let’s take a closer look at what the HD 5770 and HD 5750 brings to the table.