From the home window of Catalyst Media Center, users can watch live TV, DVDs, and recorded video in multiple formats, as well as listen to live radio and update/change the settings. The extras include free trials of three different Cyberlink software products. Considering that Catalyst Media Center is itself only a slightly modified version of Cyberlink’s PowerCinema, this shouldn’t be very surprising. 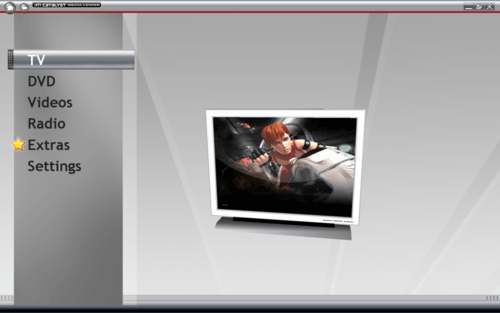 Watching TV is as easy as choosing an available channel and selecting it. 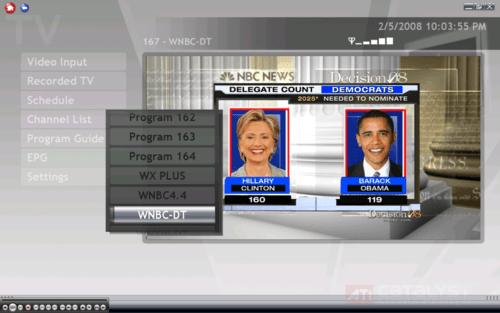 The EPG is pretty standard, if you can get it to work. After running the setup wizard dozens of times, I don’t recall the EPG ever having all of the correct information for the channels that were displayed, regardless of the signal settings or EPG selection. This will no doubt vary by region and carrier, but a quick glance around the web was quick to turn up many discussions regarding problems with the Catalyst Media Center EPG. Some programs will allow a user to schedule recordings using the programming guide – Catalyst Media Center is not one of them. 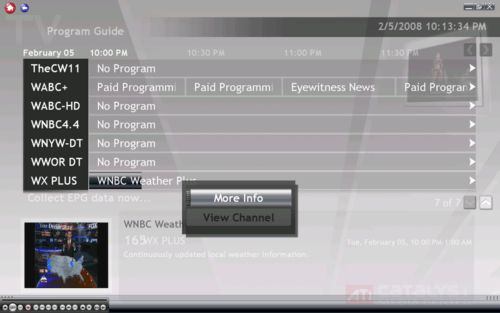 Aside from that, there were no issues watching TV. Simply enable time shifting in the settings menu, plug in the IR receiver for the remote, and enjoy.

Setting up a recording schedule in Catalyst Media Center is fairly simple. The scheduling options are found in the TV menu, and here users can set up recording times. 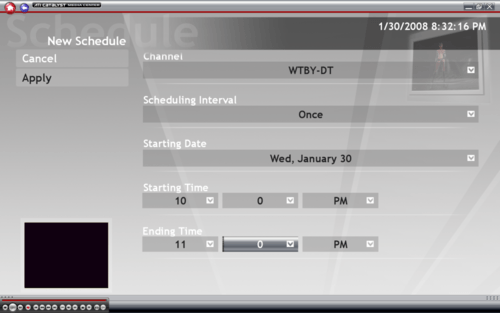 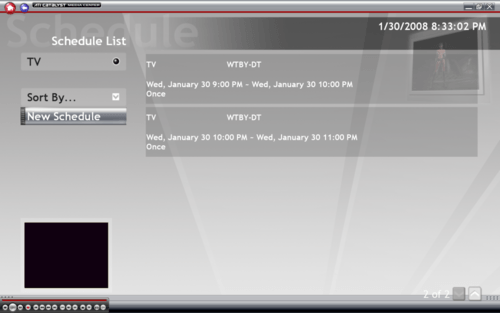 Also, Catalyst Media Center apparently thinks it has a maximum recording time of three hours – attempting to schedule a longer recording will trigger a message that the recording exceeds the maximum limit – but then the recording appears on the schedule seemingly without a problem.

I was able to successfully record for over three consecutive hours, with the only notable issue being that the maximum file size was just over 4GB, so I ended up with several files for a single recording, but it doesn’t look like any content was cut out of the recording. This effect is common of many 32-bit designed multi-media applications, however.

Once a file has been recorded, viewing it is as simple as selecting it in the videos menu.

Catalyst Media Center supports recording and playback of several different formats, but using them isn’t as straightforward as it could be.

In order to specify the format in which to record video, users first need to create a custom profile in the recording settings menu. 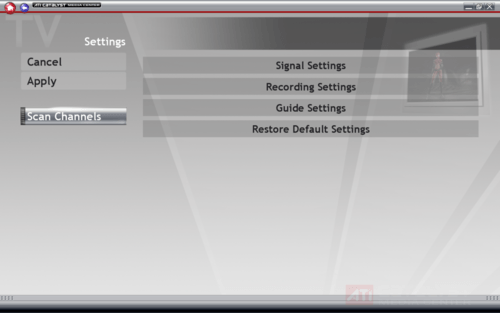 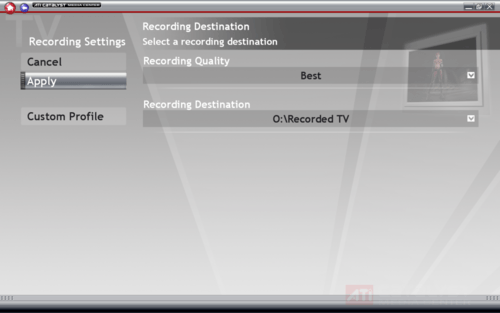 Choosing to create a custom profile will allow users to select their desired recording format. 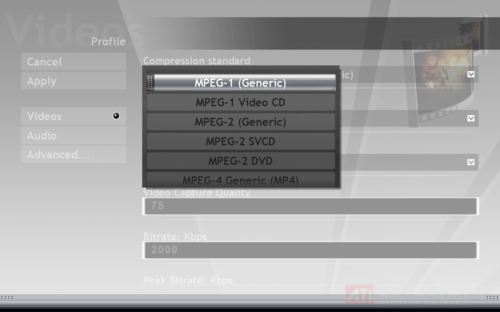 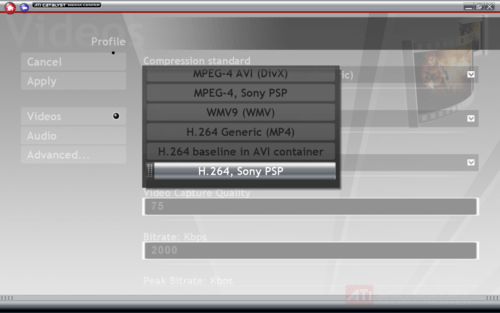 Once the profile has been created and named, (to avoid confusion, names should not contain spaces) it can be used to record TV in the settings menu and to convert existing video files by right clicking on them in the videos menu. 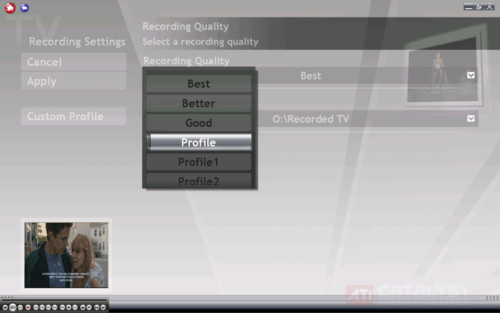 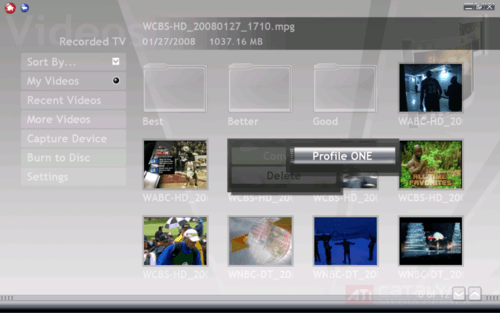 Listening to the Radio

Of the two tuners being reviewed, only the ATI TV Wonder 650 Combo USB has the capability to tune radio signals. Getting this feature set up with the included FM tuner cable is easy. First, Catalyst Media Center scans for radio stations. Once the scan is complete, users can view a list of the stations that were found, name them, and add them to a list of favorites. Users can also change the recording and fine tuning settings in the settings menu. Recording options include WMA 32K, 64K and 128K. 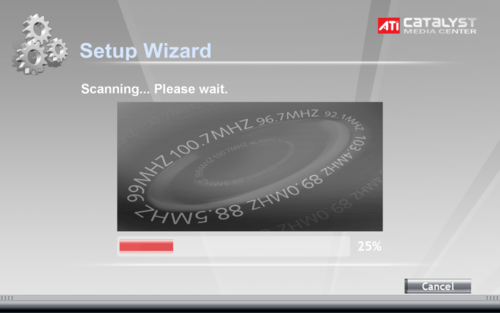 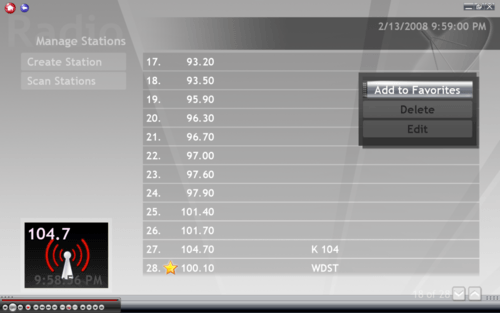 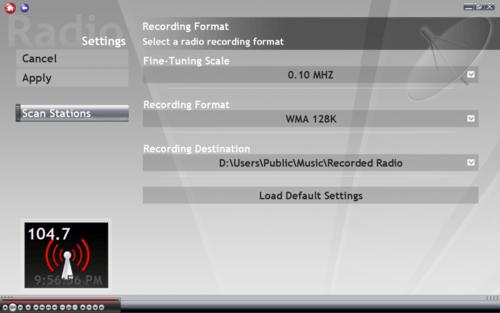 Radio output quality was as good as any radio I’ve listened to, and will depend on local signal strength/weather/geography.

From the Video menu, users can choose to burn a DVD. 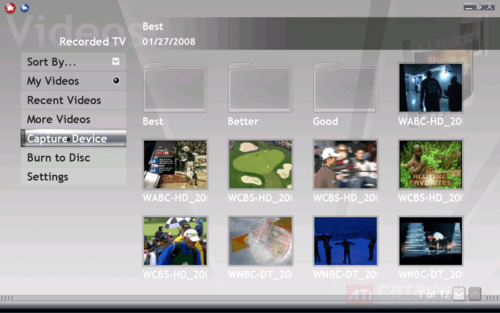 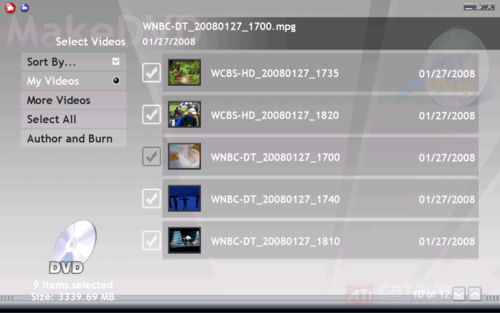 Here, users select the video files to be burned. 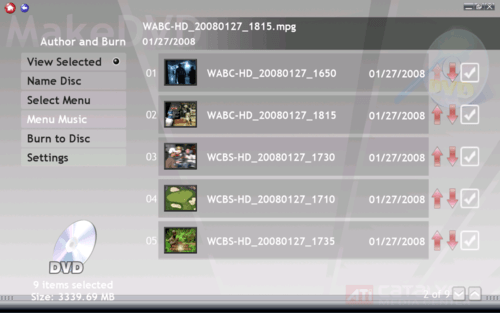 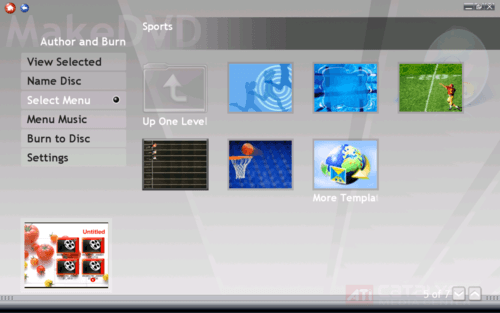 The chapter order, menu background and menu music can then be set. Once this is done, the burning process can begin. When the burning process starts, Catalyst Media Center informs the user that Catalyst Media Center can be minimized so that the user can work on other things, but notes that burning requires a lot of resources – man, they aren’t kidding. 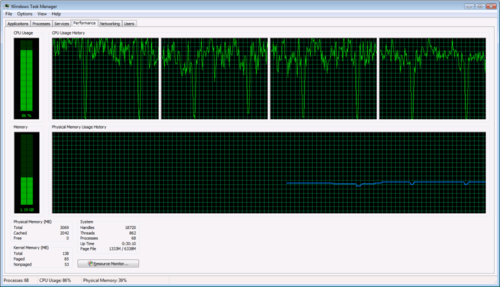 Even with an Intel Q6600 CPU clocked to 3.2GHz, CPU usage was consistently 80% or more on all four cores, with occasional pauses as chapters are completed. I also ran into another problem. 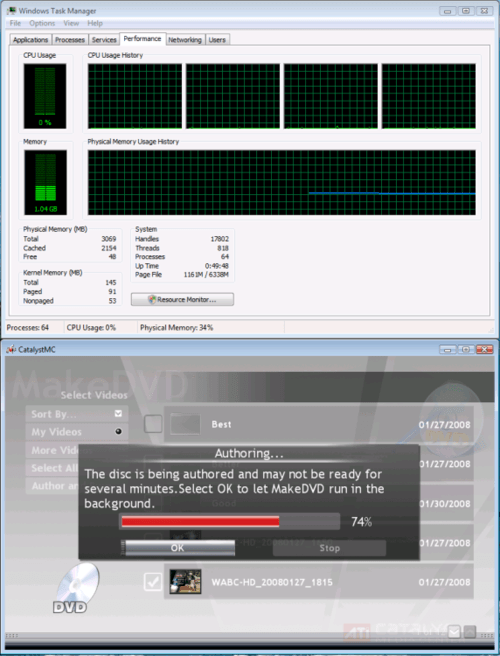 Catalyst Media Center froze before the disc was complete on two occasions. On my third try, I didn’t select any menu music (I had selected an mp3 file on the previous attempts) and the burn process completed without a problem. I can only assume that the mp3 music file was causing a problem, since that was the only different between the attempts. ‘Polished’ is not the word here.