While certainly good enough for basic use, the Catalyst Media Center is not without its quirks. I had a problem when switching from analog to digital input, where the digital signal would be full of artifacts (if it appeared at all) and generally required either Catalyst Media Center or the entire machine to be restarted in order to get the digital signal displayed properly (rescanning channels didn’t work).

I also found that trying to record an analog signal after changing the input from digital to analog often resulted in artifacts and sound errors unless the machine was restarted. For most users this won’t be a problem, but I think it is a point against the robustness of Catalyst Media Center.

While it appeared that I could control both TV tuners at the same time with CMC, I found that using what appeared to be the more recent version of CMC (shipped with the ATI TV Wonder 650 Combo USB), I was completely unable to get acceptable reception of digital TV with the ATI TV Wonder 600 PCI. While the analog signal was simply a little noisy, the digital signals were completely garbled regardless of how many times the channels were scanned or the system was restarted. I even saw a couple BSODs while trying to restart the machine. The only way to get a digital signal with the TV Wonder 600 PCI was to reinstall the version of Catalyst Media Center that originally came with it – and even then I had a couple problems getting the audio to work.

I was able to control both TV tuners at once with the Catalyst Media Center, to the extent that I could switch video inputs between the cards. However, when scheduling a recording, there is no option to distinguish between the video inputs, meaning that recording one channel while watching another is not possible using Catalyst Media Center. The lack of this feature, and the questionable reliability of the built-in electronic programming guide are the biggest flaws with the program. Aside from a few technicalities when it came to setting up recording formats, the CMC was fairly functional and intuitive.

A Note on Windows Media Center:

After installing and setting up the Catalyst Media Center, doing the same with Windows Media Center was a breeze. Basically all it asks is that the user verify that the setup should be performed automatically. The TV signal was always set up correctly, and the EPG exactly matched the one shown on my main TV hooked to my cable box.

There was only one problem – the ATI tuners would not tune any HD channels, which, in my case, start at channel 702. I could tune channels 2 through 78 only, none of which were HD. Using Windows Media Center to reassign channels (another convenience CMC lacks) did not solve this problem. While CMC may not have displayed all of my available channels in any one setup, it was able to display some HD content with the right settings. The inconvenience caused by such inconsistency will likely vary widely depending on users service providers.

Recording with Windows Media Center was also much easier. Simply open the guide, and select the show to be recorded. 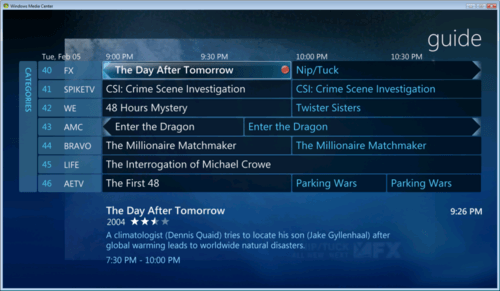 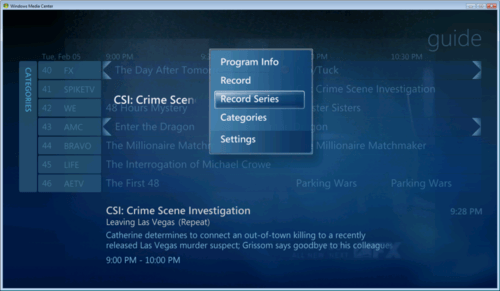 An entire series can be scheduled for recording with one click.

Aside from not being able to view HD content (probably due to channel numbers), I preferred Vista Media Center over the Catalyst Media Center due to ease of use and the ability to record and watch different channels.