Both of the ATI TV tuners tested performed very well when it came to digital content; the picture was crisp and clear, the recording quality was excellent in general, and the CPU footprint was minimal – rarely exceeding 10% even while recording 1080i broadcasts. Encoding with H.264 caused CPU usage to increase to ~20% in general with both cards. Either of these two TV tuners would be a great choice for digital TV.

Users who may want to view broadcasts via analog cable will want to steer clear of the TV Wonder 600 PCI due to the very poor picture quality.

When it comes to radio broadcasts, the TV Wonder 650 Combo USB is as good as any radio, but isn’t going to perform any miracles when it comes to weak FM signals.

On the software side, I have to say that I’m very unimpressed with the Catalyst Media Center program. The ability to effectively control two video input devices such that one channel can be recorded and another viewed is a very important feature that Catalyst Media Center leaves out – especially considering that the TV Wonder HD 650 can accept both a digital and analog video feed simultaneously. 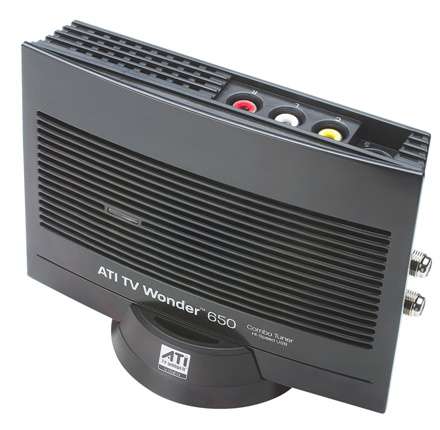 The finicky EPG and somewhat unintuitive recording settings won’t be putting smiles on many faces, and the technical difficulties I experienced while installing/uninstalling new/older versions to get a particular tuner to work correctly help to round out that ‘this software was just an afterthought to give marketing something to say on the box’ feeling. That said, I will remind you that many of the issues I ran into are unlikely to be experienced by the average home user simply because there will be fewer variables.

Catalyst Media Center is otherwise functional and fairly intuitive, but I would still recommend some version of Windows Media Center; and if your goal is to view ClearQAM, you’ll need Vista and thus have Windows Media Center anyway. ATI also advertises that the Theater 650 cards are compatible with Cyberlink Powercinema, Intervideo Home Theater, and Snapstream BeyondTV. The more the merrier, I say.

Let’s wrap this up with some ratings, shall we?

If a digital TV tuner is what you want, the TV Wonder 600 will do the job well.

The ATI TV Wonder 650 Combo USB is much easier to recommend due to its excellent picture quality regardless of the type of signal.