Over the course of the past four months, AMD has hit a couple of firsts. On the CPU front, it delivered the industry’s first $100 quad-core, the Athlon II X4 620, and shortly before that, it released the market’s first DirectX 11 graphics cards. Today, the company once again succeeds in hitting another first, bringing the first $100 DirectX 11-capable GPU to market. This comes in the form of the modest-looking Radeon HD 5670.

With a “$99” price tag for the 512MB model, the HD 5670 is a bit of an odd beast. The reason lies with the HD 5750, which has a 512MB version which retails for just $10 more. At least, according to AMD’s suggested retail price. In the real-world, the pricing is more towards ~$130 for the 512MB, and ~$145 for the 1GB. With that being the case, a $99 offering (which actually is the current going price), makes much more sense. It’s still unfortunate that no e-tailer seems to be selling the step-up for its SRP, but at the same time, it’s no surprise.

I shouldn’t get too far ahead of myself, though, because a sub-$100 DirectX 11 graphics card is something that should be ushered in with a cheer. NVIDIA has yet to deliver a single DX11 offering, but AMD continues to execute its full-fledged release cycle without skipping a beat. If things go according to plan, AMD will launch its entire gamut of DX11 cards a month or two before NVIDIA’s Fermi hits the street, which is estimated to happen in March.

The HD 5670’s goals are what you’d expect for a $100 card (let’s not kid ourselves, $99.99 is $100). It’s designed to offer mainstream consumers a quality graphics offering that can handle all of today’s games at decent resolutions, while remaining power-efficient, and quiet. With what’s essentially 1/4th of an HD 5870, and a power rating of 14W/61W (idle/load), I think it’s safe to say that AMD’s latest card has as good a chance as any of hitting this mark. 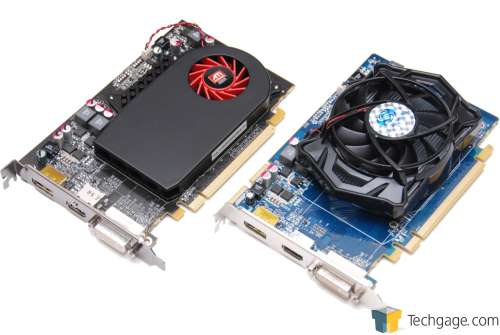 Above is a shot of AMD’s reference design, and also Sapphire’s 1GB model which includes an Arctic Cooling GPU cooler, which as we’ll find out later, is an incredible upgrade over what AMD slaps on there. Like its older siblings, the HD 5670 lacks nothing when it comes to its overall feature-set, so in addition to DirectX 11 support, we also have the ability to take advantage of Eyefinity, AMD’s robust multi-monitor technology.

Speaking of, one thing AMD wants us all to know is that support for Eyefinity will only be increasing in 2010. In 2009, supported titles were Dirt 2, S.T.A.L.K.E.R.: Call of Pripyat (still unreleased in North America), Battle Forge, Dragon Age: Origins and Tom Clancy’s H.A.W.X. In 2010, we’re due to see support for Alien vs. Predator, Battlefield: Bad Company 2, Command & Conquer 4, Dawn of War, Dungeons & Dragons Online, Lord of the Rings Online, Mass Effect 2, Modern Warfare 2 and Supreme Commander 2. If I had to guess, this is just the tip of the iceberg, as multi-monitor gaming is most certainly bound to take off soon enough.

As mentioned earlier, the HD 5670 is about 1/4th specs-wise of the HD 5870, with the lone difference being that cutting back of the wide memory bus, down to 128-bit. In addition, because this card requires so little power, no PCI-E power connector is required. You might notice a lot of confusion at the bottom of the chart, and that’s because AMD unveiled its plans to release the HD 5500 series and HD 5450 card within the next month, but neglected to give us some specifications. We’ll just have to wait.

Most comparable to the HD 5670 that we’re looking at today is NVIDIA’s GeForce GT 240 which costs about the same, but closer to around $90 for most models if you play your “cards” right. Unfortunately, we haven’t benchmarked the GT 240 up to this point, but from talking to vendors, we can expect that the HD 5670 will surpass it in performance in all tests, but not so starkly that it will become the definitive winner. Still, in addition to faster performance, the HD 5670 also adds features such as far improved power consumption and DirectX 11, plus Eyefinity if that’s a possibility down the road for you. 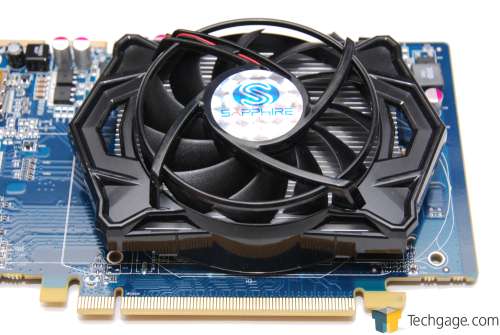 In the top photo for this article, you can see the rather simplistic cooler that AMD has equipped its reference card. The design is understandable, as this is not a high-end offering, and slim is definitely going to be the chosen path for those who want to use the card for HTPC use. But for those who don’t mind an extra little room being taken up, Sapphire’s cooling solution is more ideal, as it retains its quiet operation, and cools much, much better. 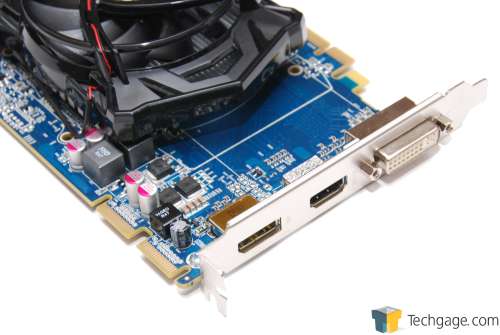 Both of the cards we received for testing have HDMI, DisplayPort and DVI dual-link ports, and with the included DVI-to-VGA connector, no matter what your monitor wants to take, you’ll be good to go, right out of the box. In addition, should you want to use Eyefinity, Sapphire also includes an HDMI to DVI cable, so that you will essentially have two DVI ports and one DisplayPort at your perusal.

We’ve covered pretty-well everything about the HD 5670, so let’s move into our test results… right after a quick peek at our test machine and methodologies.