AMD has pulled off some great things lately. It not only delivered the HD 5000 series, which helped deliver unparalleled performance, and an appealing feature-set, and it’s not only delivering the world’s first $100 DirectX 11 card, but by how things are looking, it seems as though the company will complete its entire HD 5000 line-up of all price-points before NVIDIA can get out the door with its first Fermi card, which we’re hoping isn’t going to be more than two months from this point.

With the HD 5670’s release, AMD will be following-up with the launch of the HD 5500 series (exact models unknown, but probably HD 5570) and the HD 5450. The former will likely sell for around ~$70 and offer half of the performance of the HD 5750, while the HD 5450 should see a ~$50 price-point and 25% of the performance of the HD 5670. These are all personal estimations, but given the going trend so far, these are what I’d consider fairly good assumptions.

AMD hasn’t announced an exact date release for these upcoming cards, but they will see the light of day sometime next month, and very early at that (second week at the latest, by the looks of things). Should you be excited? It’s really hard to say. Surely, both the HD 5500/5400 series will be far improved solutions over an IGP, and at the price-point, they might very well be appealing to those looking to build a SFF PC or an HTPC. This could especially go for the HD 5450, as it will feature a passive design, and ultra-thrifty price-point. 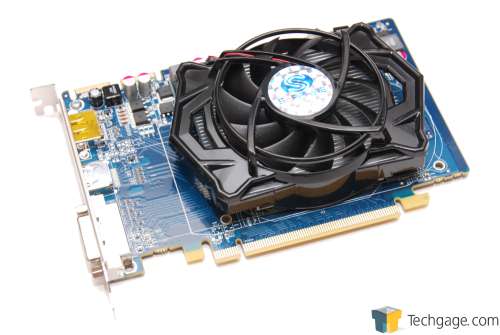 But what about the card on the table, the HD 5670? I mentioned in the intro that it was an odd beast, and I still feel that way. When AMD launched the HD 5750, it said that the 512MB version would sell for an SRP of $109. Today, that’s not the case, as all e-tailers I’ve checked have mostly focused on the 1GB version, with the 512MB selling for around $130. The 1GB’s sell for about $10 – $20 more (which is a little insane, given at that point, the HD 5770 doesn’t cost that much more, but would offer far improved performance).

If e-tailers stuck to the $109 price tag for the HD 5750 512MB, then this would be a very difficult conclusion to write. The reasons are obvious throughout our results. The performance of the HD 5750 is much improved over the HD 5670, yet its SRP is a mere $10 more. As far as I’m concerned, where this $10 is concerned there’s no reason to go with the HD 5670, unless you simply aren’t much of a gamer and want a decent GPU to help you get by. But at that point, it’d be wiser in my opinion to wait for the upcoming HD 5500/5400 series, since they will be less expensive, and probably live up to your expectations.

As the situation is today, though, the HD 5750 512MB isn’t $109, but rather $130, making the HD 5670 roll in at $30 cheaper. Throughout most of our performance results, we’ve seen rather equal performance scaling to price scaling, which is good to see. It means that for this GPU, you are really getting all the right bang for your buck, so at $100, the HD 5670 can be seen as a fantastic GPU solution. It allowed us to play all of our games at 1080p, which in itself is great, in addition to it having its other perks.

What perks? How about the superb power consumption and temperatures? Even with the reference cooler, the card idled at 42°C, which is lower than many of the other cards on our list. Then there’s the power consumption, which has no comparison (until we test out NVIDIA’s budget cards, at least). If you want the ultimate cool card, then Sapphire’s offering looks quite appealing, as it capped at 59°C during the ultra-stressful OCCT test. What’s that mean? This is a fantastic HTPC card.

Of course, Sapphire’s 1GB card doesn’t cost $99.99, but rather $120 at one e-tailer I checked. So given that, it’s hard to outright recommend this particular density, since we saw very little and next-to-nothing for performance gains (the lone exception was Modern Warfare 2). Fortunately, Sapphire’s 512MB version includes the exact same cooler, and is selling for $99.99. For its price-point, the HD 5670 is a solid card as is, but with its effective cooler, Sapphire’s card easily earns our Editor’s Choice.