Does your living arrangement make it impossible to locate your PC near your preferred space for audio listening? Audioengine’s AW1 wireless audio system could be your solution, but does it improve upon the traditionally lacking audio quality of previous wireless systems?

Audioengine is one company that’s done much to advance the state of high-fidelity audio on the desktop. Their first product to gain significant acclaim was their A5 two-way powered monitors, which were designed specifically for desktop audio use, unlike most studio monitors – which usually require some additional equipment to convert the PC’s ‘unbalanced’ line-level output signal into the ‘balanced’ type used by professional audio systems for long cable runs.

The company later supplemented its product range with the A2 compact two-way mini-monitor, and the A8 powered subwoofer. Needless to say, if you’re using one of their (analog-fed) high-fidelity speaker systems, you probably aren’t feeding it with crap from your motherboard’s onboard sound card, either – their A5 two-way monitors sat on Maximum PC’s Best-of-the-best list ever since their introduction.

Satisfied for the moment with their range of high-quality PC audio offerings, Audioengine next turned their attention to the problem of transmitting a high-quality audio signal wirelessly to an audio system across the room – or two rooms away.

Previous wireless audio systems transmitted an analog signal over the same 900mHz radio frequency band used by cordless telephones – and were notoriously lacking in the quality of their wireless transmission. However, a more ideal solution is one in which the audio signal is transmitted wirelessly in digital form, and processed into an analog waveform at the receiving end. 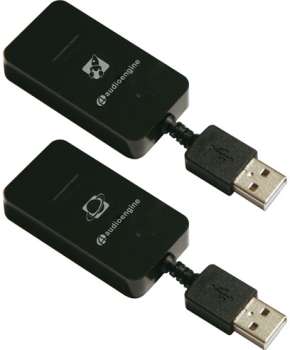 Audioengine has taken the digital-transmission route with their own wireless audio transmitter, the AW1. The AW1 system consists of two modules – an identically-styled transmitter and receiver, with a USB plug hanging off one end of each module. The transmitter module contains the codec chip that receives the incoming audio data from the PC and produces a digital audio signal. It then streams the digital signal wirelessly via an 802.11 protocol to the receiver, which actually contains the digital-to-analog converter. This arrangement avoids entirely the noise and distortion introduced by transmitting an analog audio signal to the receiver module – at least, in theory.

In this article, we’ll take a look at the Audioengine AW1 wireless audio system, and see how it performs when it comes to delivering pure sound over long distances. Has wireless audio distribution finally come of age? 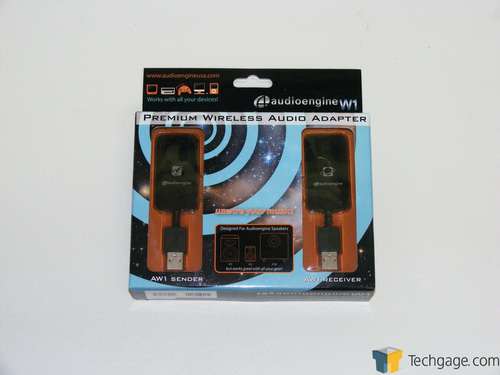 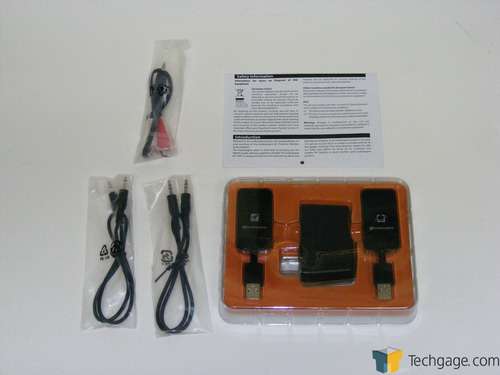 The transmitter and receiver modules are about the size of a pack of gum, and each one has a USB plug sticking out of one end, and a 35mm stereo minijack on the other. The transmitter, marked by a rocket ship, is plugged directly into a USB port on the host machine, and behaves like a USB audio device. The good news here is that you’re not limited by the quality of the audio hardware built into the PC itself – the Audioengine AW1 handles all its own audio processing. It also serves its own power needs completely from the host machine’s USB port. 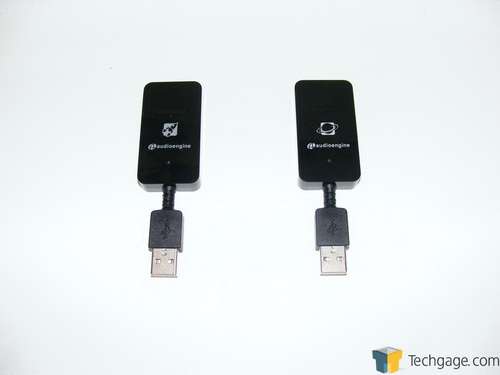 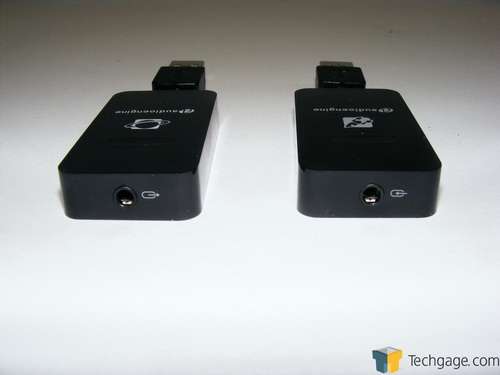 If an audio source is plugged into the 3.5mm minijack on the other end of the transmitter unit, then that signal will be used instead of the audio signal from the host PC, but the transmitter must still be plugged into a USB port to receive power. This offers some additional flexibility in that you can hook up a portable media player to the transmitter and send its output to the remotely-located sound system. 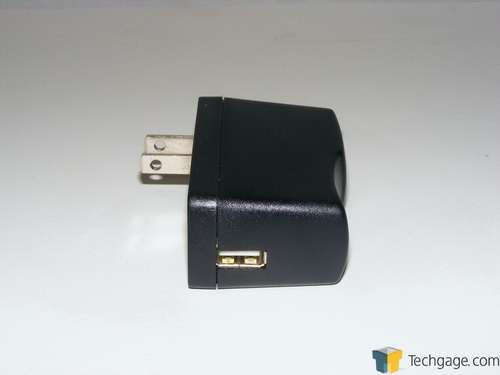 The Audioengine AW1 package also includes a power adapter with a single USB connector. Either the receiver (marked with a planet) or the transmitter may be plugged into this power adapter, which makes it possible to either stream audio signals to a sound system in another room, or stream the audio output from another device to your PC. If you try the latter configuration, however, you’ll need to plug the receiver module’s analog output into your sound card’s stereo line-in jack, since the USB audio connectivity of the AW1 system doesn’t work in reverse.

Now that we’ve covered the hardware package and its physical features, let’s see if the Audioengine AW1 truly delivers a high-fidelity audio experience in our listening tests.