Does your living arrangement make it impossible to locate your PC near your preferred space for audio listening? Audioengine’s AW1 wireless audio system could be your solution, but does it improve upon the traditionally lacking audio quality of previous wireless systems?

The Audioengine AW1 transmitter behaves like any generic USB audio device when you plug it into your PC, making setup simple and fairly seamless – there aren’t any extra control panels to configure or drivers to install. The downside to this is that there’s no equalization or DSP settings at the device level – you’ll need to rely on your media player software’s functionality for those features.

The AW1’s transmitter automatically sets up its own 802.11 connection to the receiver unit, and begins transmitting audio. The visual metaphor in the icons identifying the transmitter and receiver begins to make sense – the rocket ship travels to the planet.

To test the Audioengine AW1 transmitter’s audio quality, I connected the transmitter to my main PC, and connected the receiver to a high-quality audio system that I’ve had on my desk awaiting a review article of its own – the NuForce Icon-1 USB DAC/stereo integrated amplifier and S-1 speakers.

I left the Icon-1’s USB input connected to my laptop, and connected the transmitter’s analog audio output to the Icon-1’s stereo analog inputs. This allowed me to start both machines playing a playlist of lossless FLAC audio files simultaneously and switch between the two, comparing their audio quality.

The only changes to the reference system for this review were that the ASUS Xonar D2 audio card was replaced by the Audioengine AW1 transmitter unit’s built-in audio codec, and the reference Beyerdynamic DT770 headphones were replaced by the NuForce Icon-1 amplifier and S-1 desktop speakers. 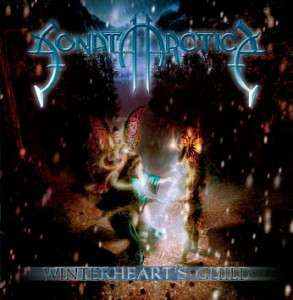 Upon the recommendation of a friend, I’ve recently come to appreciate the music of the Finnish metal group Sonata Arctica. Their synth-driven melodic style has also proven to be an excellent test for a sound system’s transparency and its ability to separate individual instruments within a complex harmonic structure.

On a system lacking in transparency, the upper harmonics of instruments can sound like lifeless noise, but on a system that effectively gets out of the way of the recording, individual sounds like guitar distortion, cymbal crashes, and synthesized effects remain distinguishable from one another, even with many of these sounds occurring simultaneously. For this review, I used Sonata Arctica’s album Winterheart’s Guild to conduct listening testing.

In addition, the ‘imaging’ – that is, the precise rendering of phase relationships between speakers that allow you to perceive individual instrument locations – was not quite as precise when the AW1 system was used, though this is an extremely subtle effect that won’t make much of a difference for most listeners. On the track “Silver Tongue”, the slight dynamic compression caused the sound to seem slightly flatter, masking the subtle difference between hard drum thwacks and ‘harder’ drum thwacks.

The other characteristic that seemed slightly hampered when using the Audioengine AW1 system was overall ‘openness’ – some of the very low-level detail began to be lost. In the song “Victoria’s Secret”, the feverish guitar work is overlaid by keyboard work that follows the same notes. Through the AW1 system, the two instruments following the same notes couldn’t easily be separated by ear.

However, switching over to the Icon-1’s DAC allowed the system to resolve the individual instruments’ differing harmonic signatures flawlessly. On the track “Gravenimage”, individual voices in vocal harmonies seemed slightly blurred together instead of being rendered as multiple distinct voices in harmony.

Minor ‘audiophile’ nitpicks aside, the sound quality of the Audioengine AW1 far exceeded my expectations. Unlike older wireless audio systems that transmitted their audio signals in analog form, the AW1 retains the impression of listening to a ‘CD-quality’ source, even when the transmitter and receiver are separated by long distances.

To test the AW1’s range, I connected the receiver module to a shelf stereo in another room, about 30 feet away and separated by one wall. The AW1 delivered enjoyable, high-quality sound even in this particular application, where the source and destination were separated by a meaningful distance. It’s definitely good enough to feed a shelf stereo, a set of powered PC speakers, or the ‘aux’ input of an iPod docking speaker in another room.

If you want to be able to enjoy your digital music collection in another room of your house, the Audioengine AW1 is one of the best things going in wireless audio. While it’s still not quite as clean or transparent as a direct connection between the sound system and a high-quality sound card, it performed far better than I’d anticipated, given my previous experience with sub-par wireless audio gizmos. Though it won’t replace a direct digital connection to the source component, it’s more than adequate for sending audio to a stereo system in another room. Its few sonic weaknesses are most likely caused by lower-quality DAC componentry than most high-end sound cards use. 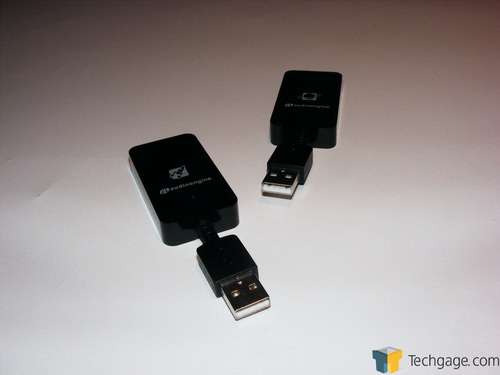 However, if you’ve got a pricey top-of-the-line home theater or hi-fi system, and want to stream audio from another room for critical listening on your high-quality components, you might be better served by something like Slim Devices’ Squeezebox, which actually streams the entire media file to the receiver unit for decoding, or by placing a dedicated PC equipped with a high-quality sound card into your home theater setup. The fewer encode/decode stages in the signal chain, the better your sound quality will be.

The bottom line is that Audioengine’s AW1 wireless audio system is a practical and good-sounding way to enjoy your music in another room without pulling an unsightly cable across the floor, or attempting to route a cable through your wall. I can easily recommend it for just about anyone who’s looking for a way to stream music from point A to point B without wires, but more than that, streaming any sort of media wirelessly from room to room automatically does quite a bit to elevate your ‘geek’ credentials.