Today, Vivox is bringing voice to over one million subscribers in more than 180 countries. Currently, Vivox is being used in EVE Online, Second Life, K2’s War Rock, and Icarus’ Fallen Earth, among other applications. I was shown a video and audio demo which, while tough to outline in text, I will attempt to convey in such a way as to not leave the reader too confused.

First I was taken into world of EVE, where they had a demonstration for me.

Monty: EVE Online we’re currently live with and we actually just issued a new release with them so there’s a few things in the new release that are a combination of improved audio quality, so the audio quality is, I’ll say, fabulous, but you can be the judge of that.

Kiersten: Even for the lower broadband users?

Monty: Yeah we actually cut the amount of bandwidth we use more than 50% in fact the effective rate is now about 30% of what we were using before. So it’s pretty good. And the audio quality is amazing.

At this point, we both donned headphones.

Monty: We’re in game here now with a couple of guys who are back at our Boston office, and in Russia.

What I heard through the headphones, sounded as clear as if he was standing beside me, clearer, considering how noisy the conference floor was at the time. I was able to completely understand both of them, it was pretty impressive. I don’t personally use voice in games but the quality I experienced here, made me realize that I may have to consider it.

Monty: So you can hear the audio quality in the sound and the other thing we have got going on in this build is multi-channeling. We can do up to six channels at the same time so you can scroll through, but you can see how one panel has a red light on it, that is the one I’m speaking on. The one with the blue light, I’m listening to. So in combat there’s a little window that you can pop up that you can click on channels and choose who you’re speaking to that quickly. So you’re hearing all these different channels but you speak to just the channel you want to. 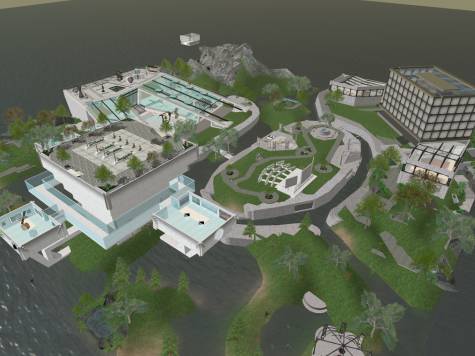 Kiersten: And right now you can only speak to one channel at a time?

Monty: Yes you speak to one channel at a time, but we’re looking at a broadcast channel.

Monty: So one of the other things that we’re dealing is what we call voice fonts. So we’re speaking to an echo channel, you’re going to hear your voice come back and you’ll hear me speak. So this is my base voice, now I take it over and I’m bigger, deeper. The voice is bigger, the resonances are different, we can take you higher, do gender changes, make you sound older, all of that stuff.

Monty: Uh no, it’s actually the other way around.

Monty: Nobody would think you were a female with that voice.

Kiersten: Well possibly because it is a higher pitched male voice because there is still a difference between your voice in orc and my voice in orc.

Monty: Yes. Some of the stuff we’re doing in game implementation would give you the ability to control that. So you’d say, you know, I’d want it to be a little more deeper than the base set, and adjust it as such. We announced at deal at GenCon with Wizards of the Coast for DDI Dungeons’ and Dragons, and for being an old pen and paper guy, the ability of the dungeon master to be able to flip his voice between various character races on the fly, really changes that whole experience. It gives you a lot of versatility.

So we spent a year working on the voice font stuff , it’s some crazy math, but yanno the impact is smooth voices, they don’t come out as being really metallic and processed, and the ability to do things like, if I wanted to sound like an emotionless space faring race without naming any names, I can reduce my pitch range down. Now what we do with gender flip fonts is women speak in a wider pitch range than men do, so what we would do is take my voice, and we’d increase the range, or brighten my voice. It would give us a more interesting sounding voice. So all sorts of things like that.

We’ve done some experience now with lilting voices and changing some of the cadence and rhythm of the voice and stuff like that. So there’s a lot of neat things that voice fonts can do. 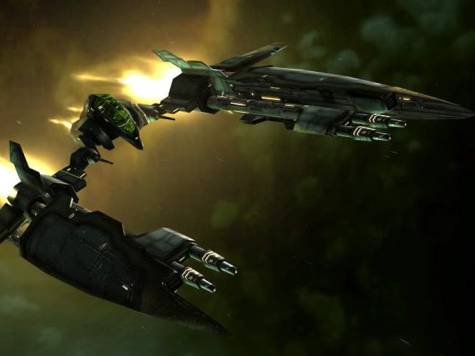 Kiersten: Are you able to let the user fine tune a little more than just choosing orc from a menu?

Monty: Yes, the way we work, everything is done with the game company so it’s going to be integrated into the game. The way CCP has integrated it [into EVE] works for their game.

At the time, Second Life was down, so the conversation turned a little.

Monty: For Second Life, we’re finding with voice, more people are staying longer in the game, more who try it are converting over to regular users to Second Life. And the whole thing behind that is Second Life is big, and you’ve got to find where something interesting is, and it’s sorta hard to sit there typing. “Hi there, anyone seen anything neat?” But if you’re walking past a group and they’re talking about this cool tree house thing, or this party going on, all of that is changing social dynamics.

What we’re starting to see is the whole recruitment side of it. When I start a game, and I’ve been a game player since Pong, anyway, when I buy a game, it takes me about half an hour before I say “I’m not playing this anymore”, so for a game developer the big issue is about when I get somebody in, can I really make them stay.