Kiersten: How soon are you going to be getting onto cell phones?

Monty: We actually do some stuff on cell phones right now. There’s a phone booth in Second Life right now and you can walk into the phone booth and use the telephone and make any regular phone ring. You can dial in from a regular phone. We’re working with a couple of handset carriers right now and taking the code and putting it onto the handset. So you’re actually native in EVE but I’m not paying minutes or anything like that.

We also do SMS out of this, for example in EVE if a base is under attack, you can get people to log back into the world. We have an IM client as well, and we’re actually able to do things like show that you’re in game, or show that you’re online but not in the game. We’re looking at that and breaking it down by identity, I know you’re online and in this game, and I can talk to you while I’m in game and playing something else, or I’m at work, so a lot of this proxying of identity and massive gaming and all of that. So from the game to the desktop to the cellphone, people can link it all up.

Kiersten: Now something about the cell phone aspect of it, does using and giving your cell phone info to the system in any way compromise your phone number?

Monty: One of the first things we started doing is called Anonymous Caller. So in all of the integrations we do, if you call me on my cell phone, you don’t get to see my number. The system does it, the system knows my number, the system knows who you are and patches me through. You send me an SMS, you don’t know my number, I reply and you STILL don’t know my number. So what we’ve done is mediated in between, so we’ve handled and anonymized the whole thing.

Kiersten: Are there plans to release stand alone Vivox clients for players who’d like the technology in games that are not officially supported? For example, someone like me who doesn’t necessarily play Second Life, but wants to talk to people who play Second Life?

Monty: We can see that happening. I think initially it will be in partnership with games. It’s not slated but I wouldn’t doubt it would happen. We went live with Second Life a month ago and we’re doing three hundred million minutes a month. It’s huge.

Kiersten: Is Second Life the only one that provides visual clues as to who is speaking in game?

Monty: No EVE does as well, the ship glows red. War Rock also has visual clues but they all do them slightly differently. War Rock does it based on an indicator over your head or off the screen to show who is speaking now.

Kiersten: Games that are rated T for Teen, are you going to offer any type of language filtering both in text and in speech.

Monty: No you can’t do it in real time. Instead we’ve got multiple layers of behaviour controls. The first step of behaviour controls is self moderation. I can mute you personally. Now I can then take that up to the next level to moderator controls so the party leader can say ‘hey you’re out of line, you’re out of the channel’. Then we kick that up to what we call reporting, so some of these games that we’re talking to are targeting younger demographics and want to record every channel. Now we only keep a short loop, kind of like TiVo, we record everything then throw it away, but with the reporting we can grab a loop, hold it, and then a GM can read it and say, ‘yeah, you were a jerk, you’re outta here’. 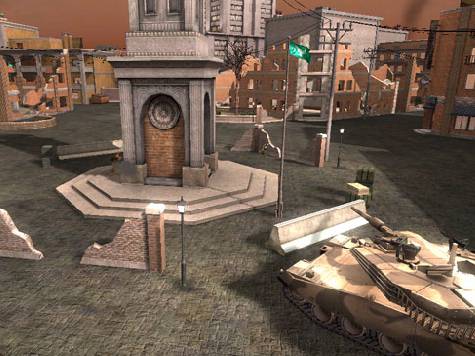 Kiersten: You’ve also got your speech to text file, it logs. It’s a big file but it logs it all.

Monty: Yes that’s exactly where we’re headed with that. And the final stage of that and we’re talking to a couple of companies about this, is we’ve developed models on reputation tagging. So we started out with just the essential basic concept of ‘I tag this guy because he curses all the time’ and you tag him because he curses all the time but a third person doesn’t tag him because she doesn’t think he curses too much. And a fourth person also doesn’t think he curses. So when he comes up against the data, it doesn’t show his name as someone who curses, because the tags balance.

Now if everyone says this guy doesn’t curse but I say he does, and I’m the only one who says he curses or my clan is the only one who says he curses, we throw that out because you’re ganging up on him. So there are a lot of ways to integrate that for anti-griefing. With tagging it’s also aged filtered. I’ve got kids and I as a parent can say I want to put the age filter on. They’re not talking to anybody more than three years older than they are. So we have a mind numbing list of controls but it should really fit the game. It should be the environment, the atmosphere, the experience that the game devs want.

Kiersten: How hard is this going to be to retrofit into a game that’s quite a bit older than say, EVE, which is only 4.

Monty: It’s not hard, all the stuff we’ve seen, all the companies we’ve worked with core integration is straightforward, the biggest effort ends up being how much UI tweaking they want to do. And other than that, it’s not an issue.

Kiersten: Is there anything you want to cover that maybe we haven’t touched on yet?

Monty: No I think we’ve hit all, very thorough. I think that companies are hearing that we can integrate voice well. We’ve heard of poor integrations that the companies have picked up but they don’t use. When you do it right, it actually drives game revenue and that’s huge. Makes my day.

Kiersten: Thank you very much for your time, Monty.