The last page was a lot to digest ;-) but I’ll try to cover the important parts. First off is the signal to noise ratio of greater than 115db. This basically means that for greater than 115db of output you’ll see 1db of noise. This in turn means that under ordinary listening, noise will be a non-issue. Under normal listening at levels of 70db the noise will be -45db. Look at it this way, if the noise is -115db bellow 0db then it’s a matter of adding that -115 to the level you’ll be listening at and that tells you how far bellow that level the threshold for noise is.

Typically you’ll be running into distortion from your speakers or headphones before you run into noise from the card unless you’re running some mega wattage speaker system or using a set of electrostatic headphones with the out-board amplifier. Even then you’d be hard pressed to identify noise versus the distortion usually seen by human ears at high volume levels.

I know that anyone that’s into loud music will identify with what I’m getting at. You’re cranking the stereo, the walls are shaking, the dishes rattling in the cabinets and you swear that there’s some raspiness in the midrange. You leave the room or house and walk a few feet away and the sound is pristine. What you’re experiencing is the inner ear creating standing waves in the ear canal. Yes this is a highly simplified version of the phenomenon, but it is what’s believed to be happening. If you want a more detailed explanation, Google "Distortion in the human ear" and it will give the links you’ll need.

The OPAMPs for the speaker outputs (Operation amplifiers, basically, pre amplifiers for analog output) are listed as having a 120db dynamic range. This means that they’re capable of handling signals going from 0db to 120db with no compression or distortion. The input OPAMP is a slightly lower spec par, rated for 114db. This still runs in the high end though so it’s nothing to be discouraged by. You’d have to be recording Ted Nugent live at a distance of 1 meter to overload the input. Not likely to be much of a problem. If, on the other hand, you’re feeding a signal from a set-top cable box or HIFI VCR or DVD player, don’t worry about it. The chances are that the dynamic range of those devices will be lower than the input on the sound card.

The X-Meridian has a very unique feature that you won’t find on any other card on the market. The output OPAMPs are discrete two channel units rather than integrated units all on one chip. Furthermore they’re not soldered to the board, rather they’re socketed so you can swap them out for different units. If you want sound with more definition to it simply swap the OPAMPs. I think that it’s a pity that the input OPAMPs don’t give you that freedom. I can understand why they didn’t implement it but it’s still too bad that they didn’t.

Now, looking at the specs Auzen claims that their card can take a 24 bit 96Khz input on the SPDIF. I’ve found in use that this is not true. I only have a single set of speakers (Yeah, I know…how unconventional) and I simply detest having to swap speaker inputs from one rig to another during testing so I decided to run the optical output from my spare PC to the optical input on the X-Meridian in my main box. I then set the output on the card in my spare rig (the Turtle Beach Montego DDL) to SPDIF only and set the sample rate to 24 bit 96Khz. and let rip.

I got this sped up sound that was vaguely similar to a buzz saw coming from the speakers. Wha….? I open the DDL driver, verify that it’s indeed set to the right settings, go into the drivers for the X-Meridian, check to see that everything is kosher there and try again. Again with the sped up buzz saw. I’m confused as hell by this point so I start checking that everything is physically configured correctly, the cable out is indeed coming from the output, it’s running to the input, yadda yadda. Everything is aces there. Hmmm…. Out of curiosity (and a wee touch of desperation) I switch the signal to 48Khz and guess what, we have sound! I haven’t had a chance to check whether the output is putting out 24 bit 96Khz or 24 bit 192Khz as I don’t have anything that will accept those rates.

Now that I’ve jabbered your ear off let’s take a look at this beasty. 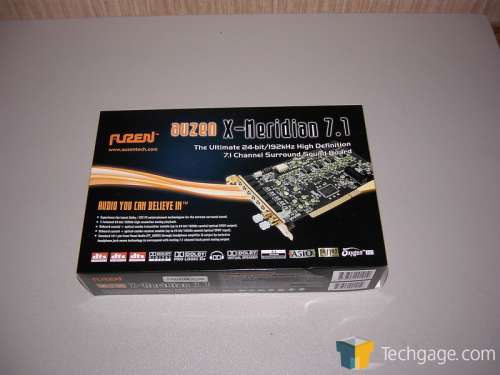 The box is… a box. It shows the features of the X-Meridian and supported technologies along with letting you know it uses the Oxygen chipset. 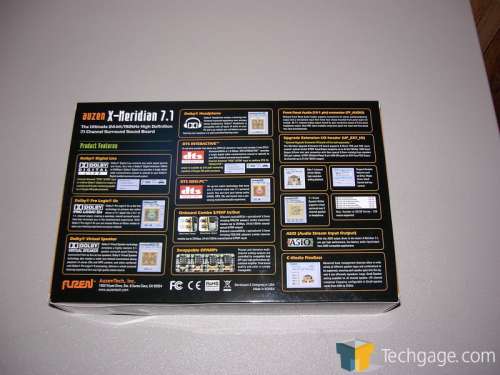 The back of the box is a bit more detailed about what the features mean to you, the end user. 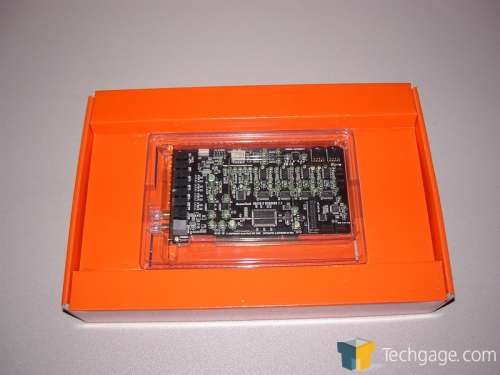 Inside the box we find the card in an anti-static blister pack. 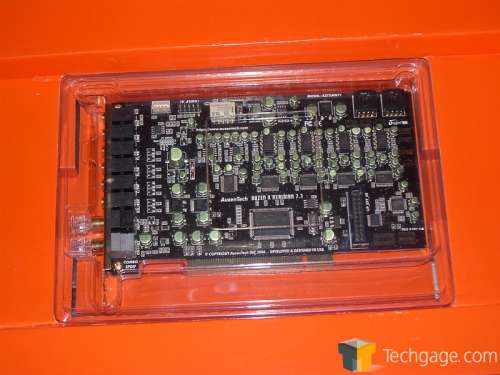 Unlike the Montego DDL, the X-Meridian is a large card. It’s easily as large as the higher end X-Fi’s. 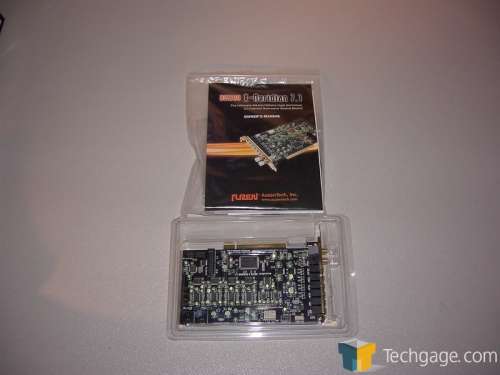 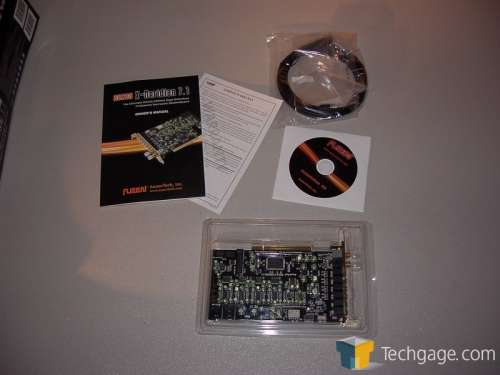 Inside the box is a large well written manual a 9′ (3 meter) optical cable, warranty card, driver disk and of course, the X-Meridian itself. 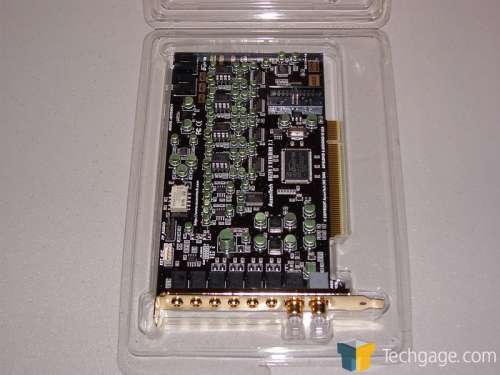 Looking at the end we see that Auzentech went with metal connections for the speakers rather than the color coded plastic variety used by many other MFG’s. This is good in that it gives a better connection to the ground on the barrels of the inputs and bad in that it makes hooking up the speakers an object lesson in how well can you memorize the locations of the connectors. Yes, there are icons engraved on the PCI slot cover but unfortunately they’re covered by the metal strips between the slots.

One interesting feature of the X-Meridian is the SPDIF interfaces used. Rather than using the 3.5mm jacks like Creative uses for their cards for their coaxial SPDIF Auzen went with RCA jacks that have optical elements in their center. The plastic that we see in the center of each RCA connection is the optical adapter that allows the use of a standard Toslink cable. 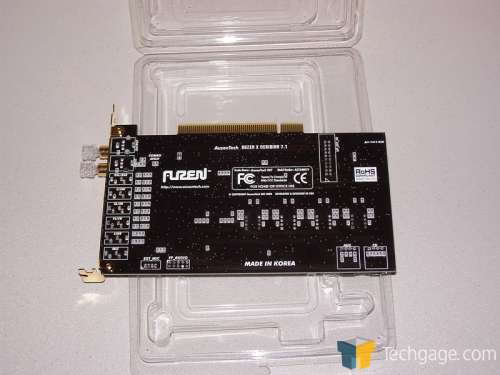 Looking at the back of the X-Meridian we see that it’s manufactured in Korea and that it’s RoHS compliant. A nice touch but I really doubt that many of these will find their way into the landfills as everyone can use good sound :-) Actually, I think that the only way a user of one of these cards would stop using it is if A.) it dies and is out of warranty, B.) PCI disappears completely or C.) driver support goes away after Vista is replaced.