Now that we’ve had a look at the card, let’s take a peek at the driver. 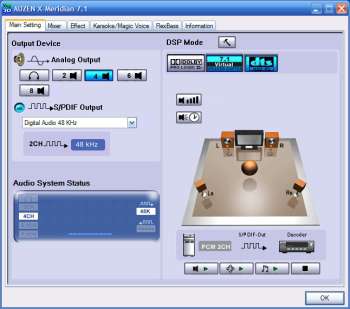 What I didn’t show is that if you choose headphone you get an added tab for Dolby Headphone. This is a virtualization that mimics the sound of a 5.1 speaker setup through a 2 channel (left and right) headset. This will also work with the Virtual Speaker Shifter to expand the effect further from a 5.1 virtual sound stage to a 7.1 virtual sound stage In the virtual living room we see a representation of the speakers, the head of the listener and to the left of that are a pair of buttons which when clicked upon will allow for speaker level adjustments (upper button) or adjusting the time delay for the rear speakers (lower button). 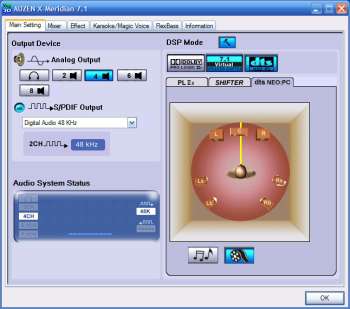 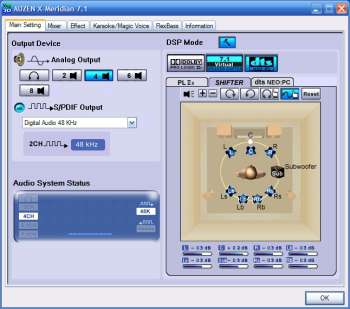 Clicking on the Shifter tab brings up the Virtual Speaker Shifter soundfield. From left to right you can choose to have the virtual speakers rotate constantly either clockwise or counter clockwise, randomly rotate the speakers to the location of your choosing or drag the speakers where you feel like. As you can see I have the virtual center channel a bit closer to the virtual listener than the rest of the speakers. This increases the signal level from the virtual speaker in question. Simply increasing the levels for the front speakers won’t help to bring dialogue into focus, it will increase the ambient sounds normally heard from the front left and right channels along with increasing the center signal.

I run the virtual 7.1 soundfield and it works really well, even listening to my system from a point outside the soundfield gives the illusion that there are speakers on my back wall. My speakers are set up with two speakers about 3/4 of the way up the wall on either side of my monitor about 4 feet from the center of the monitor to each speaker and my surround speakers are to the side of me slightly behind my head also 3/4 of the way up the wall. Listening to movies though, I can distinctly hear content coming from behind me and with the center channel boosted slightly the dialogue is firmly anchored to the monitor and in no way muddy or muffled. 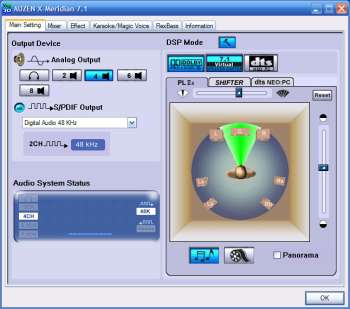 Remember when I mentioned the soundfield adjustments? Here’s an example of what I was talking about. In music mode the slider at the top adjusts the focus of the center channel either bringing it down to a point at the center or opening it up to spread it out to the sides. This gives more depth to the front sound stage and the slider to the side moves the bias of the soundfield from the front to equally situated to the rear. Bear in mind this is aimed at music listening so using it for movie listening might have less than desirable results. Note that this is available in DTS Neo PC and Pro Logic II mode. 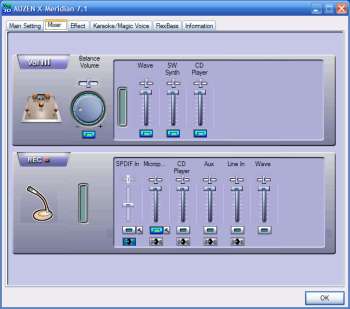 Hitting the mixer tab brings up (taa-daa) the mixer. The unusual thing about this mixer is that you have access to both the playback and record functions simultaneously which is pretty cool all things considered. The buttons with the green insets are for muting the slider they’re attached to and the buttons below the mute buttons on the record mixer are the monitor buttons which allow you to listen to the selected channel through your speakers much like the tape monitor buttons do on home stereo receivers. Both the record and playback sections have a VU meter to let you monitor the signal strength of the respective functions. 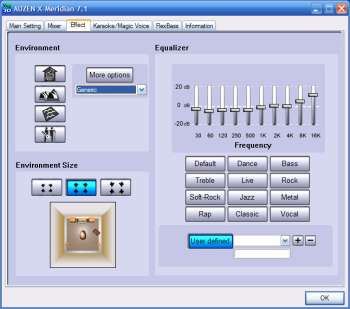 Clicking the effect tab brings up the sound effects, room size and EQ. The effects and room size are only implemented if you choose one of the soundfields or click on more options and choose a soundfield from the drop down menu. Personally I think that this is where all the C-Media powered cards that I’ve encountered fall glaringly short. The only way to control the mix of the effects is by choosing a room size. There is no mix or depth controls so if a soundfield is to wet or has too much reverb to suit you it’s either try to find another soundfield that suits your tastes or failing that choosing to go dry with no effect at all. The room size is basically useless. All it does is change the rate of the reverb. Faster for a small room and a bit longer for medium and a bit longer for large. The depth remains the same no matter what.

The EQ on the other hand is great. It goes all the way down to 30hz and all the way up to 16Khz in full octave steps. That’s 10 full bands that are extremely effective, the slightest movement of the sliders is immediately and distinctively audible. Given the massive output on the analog speaker outputs you should use a bit of caution on the bass sliders. I found that at high levels moving the 30hz and 60hz sliders above 0db really over drove my sub.

Now you might notice that there’s no way of disabling the EQ, in fact you can’t, instead if you don’t want any equalization you click the default button to set it to flat and it’s the same as not having the EQ engaged. When you move the sliders from any position in a preset it switches the EQ mode over to user defined. If you like the sound of the EQ as you’ve set it to you just type a name for that particular EQ curve in the box below the drop down box next to the user defined button, click the + sign and that curve is saved. After that your preset is just a drop down menu away. 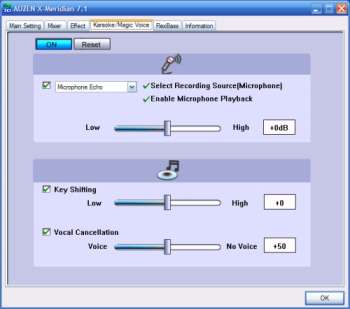 The karaoke tab brings up the karaoke and magic voice features. For karaoke you can choose to shift the key of whatever is playing back through your speakers by 4 keys either sharp or flat. You can also cancel the vocals on music that you want to sing along with. The success of this depends largely upon how the vocals on the music in question are laid down. If they’re in the center of the soundstage it works better but if they’re off to one side or the other (biased either left or right) the effect can go from minimal to none at all.

There’s also the mic echo/magic voice setting that you can switch between using a drop down menu. The echo is reverb that you can set from minimal to really wet or effect laden. Magic voice is a gimmick that allows you to change the timbre of your voice from a high pitched squeak to a bass heavy rumble. You can use this to disguise your voice in audio chat if for some reason you want to sound like Jennifer Tilly or Lurch. 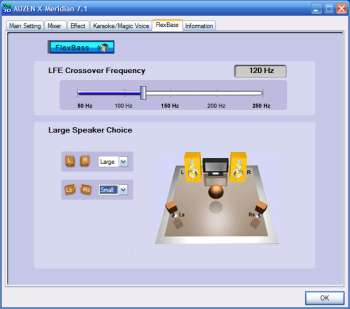 Flex bass is the name used for the setting of the subwoofer’s crossover point and choosing the size of the speakers you’re using. If you choose large speakers the bass for those channels will be sent to the speakers themselves. If you choose small speakers the bass will go to the sub instead. The crossover point for the sub is continuously variable from 50hz up to 250hz. I’d advise against setting the frequency of the sub above 100hz unless you just have tiny main speakers as bass frequencies above 100hz are readily identifiable by the human ear.

This means that unless your sub is on your desk smack dab in the center of your front soundstage it will seriously screw with the quality of your sound. Yes, I know that it’s set to 120hz in the picture but that’s the default setting from the driver. I’m using a 4.1 setup so my bass is summed by the amp and sent to the sub at the frequency chosen by the MFG. Happily mine are are below 100hz because I can’t locate my sub with my eyes closed :-) I just enabled the flex bass to show you what it does and how. 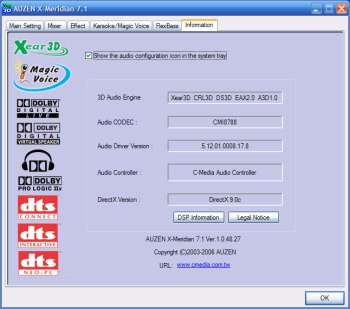 Hitting the information tab brings up, well, information. It tells you your driver version, codec, audio controller and other information along those lines along with showing the various technologies employed by the X-Meridian. Clicking the DSP information button brings up a smaller window that outlines all the digital signal processing versions in use by the card.