I’ve used to X-Meridian for some time now. I’ve used it for gaming, music listening and movie listening.

This card offers very good gaming performance from a sound standpoint. Shotgun blasts, rocket launcher explosions and sniper rifles sound as real as if you’re in the middle of an honest to god battle. It’s saved my butt a few times when someone would think they were being cute trying to sneak up behind me and I’d hear them creeping up on me just in time to spin around and blast them. From a raw FPS standpoint you’re going to lose out to cards with dedicated hardware rendering but that’s the way it goes when your DSP is software based.

If wringing every last frame per second out of your gaming is your motivating choice for choosing a card then you need to look elsewhere because this card does come with a penalty but if you want a lush experience that’s rendered cleanly with no noise during high sonic impacts then this card will suit you down to the ground.

I’ve listened to every type of music that you can think of (aside from country western) and I’ve got to say that I love the sound from this card. The music sounds as it should, there’s none of the compromises usually associated with listening to music on a PC. Vocals are strong and musical with no edge in female vocals, no muddy vocals from the male singers. They’re both rendered with clarity and authority. Bass is sharp and deep. It doesn’t sound rounded or wallowed out.

Midrange cracks but it’s not raspy like is associated with digital music. It sounds natural not forced. Overdriven guitars don’t sound like you’ve actually got a fuzz box in the line instead you can hear the instrument and the amplifier that’s being driven to the brink of destruction. Drums and cymbals pop. The treble is clear and ringing without the airiness associated with too much emphasis and drums are distinct and not blurred. Snares have the proper ring, stand toms ring and floor toms pound, the kick from a double bass makes you worry your head will implode when you’re pushing the volume to 11! I kind of wonder if the drummers from Spinal Tap were beta testers for the X-Meridian ;-)

There’s no colorization from the card at all aside from the EQ you choose to use but even that is quality. It doesn’t add noise unlike some equalization I’ve encountered over the years. It doesn’t add noise to the signal chain by causing the signal in the frequency center to clip, instead it smoothly raises the sound in that range and just gives you what your after, either a boost or cut in that area. No distortion, no compression, just a tonal shift.

One thing I need to address about the X-Meridian is the analog output. The X-Meridian is capable of ungodly output, it puts out 5V RMS on the speaker outputs. This means that you don’t have to crank the gain on your speakers to reach full volume. What this translates into is a cleaner signal since it’s less likely that you’ll be hearing electrically generated noise from your speakers. Noise from your house AC can be picked up through the low level wiring on the analog inputs on your speaker system. This means that you can hear static from AC motors, switches and other sources as EMI (electro magnetic interference) when you increase the gain on your speaker system.

With the X-Meridian you typically won’t need to use more than 1/3 volume on the volume knob for your speaker system to obtain full output from your speakers since most other soundcards on the market can’t put out more than 1.5V RMS so speaker MFG’s set this as the limit to shoot for. Setting the gain (volume knob) on your speakers above 1/3 to 1/2 way up will only result in causing your amp to distort and could possibly result in damage to either the amplifier or your speaker’s drivers. This also means that headphone users need to be a bit more tender with the volume control in windows since most headphones aren’t designed for more than 2.5V RMS.

Cranking the X-Meridian up to full steam wearing headphone can result in damage to your hearing and your headphones. One is an annoyance and the other is a tragedy. I’ll let you decide for yourselves which is which. 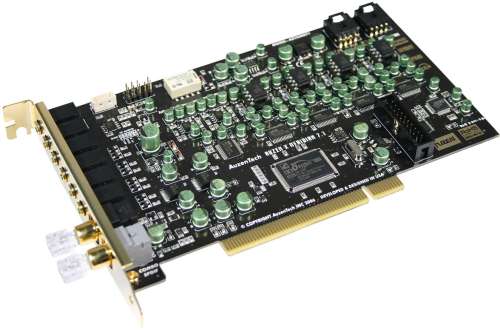 I’ve listened to a wide variety of movies on the X-Meridian. From fantasy to action to horror to comedies to science fiction. One thing that I’ve found is how immersive the experience is. I’ve been using the 7.1 virtual speaker shifter to run a virtual soundfield and it’s simply amazing how much the psychoacoustics (no, not crazed sounds, rather sounds you think you hear) from this little soundfield enhancement really open up a movie experience.

As I said earlier it really sounds like there’s something going on directly behind your head when you’re in a crowd scene or in the middle of a blazing action sequence the rear information that is imparted by what it does to the side mounted surround speakers is simply amazing. The virtual center channel really does help bring dialogue into focus. I’ve been using a 4.1 set for years and for the most part I love it but one thing I’ve always found lacking was dialogue. I’ve found that to get clear dialogue I had to crank the sound up to the point that when music would play or something big like an explosion would happen I’d end up getting blasted out of my seat. After setting the 7.1 v.s.s to active and toggling 7.1 speakers in my DVD playback software I found that dialogue was crisp and easily followed. No more hair trigger volume explosions.

The X-Meridian is a fantastic card if you’re not heavily dependent upon hardware acceleration for gaming. If gaming is something you do for fun and you’re not running a marginal system that needs every CPU cycle to keep your games running at a smooth rate and you place a lot of emphasis on quality sound then you can’t go wrong. This card has capabilities above what I’ve covered but unfortunately I’m unable to test it on those fronts. That said I do plan on getting a home theater system that can do this card justice and leverage it to it’s full potential. Realtime DTS encoding? Gaming in DTS surround? Oh yeah baby.

What I have witnessed of this card, though, is simply amazing. The sound is second to none. I’ve heard the same sources through the top of the line X-Fi and the X-Meridian is by far the better sounding card. If you’re running Vista though you’ll need to be running the 32 bit version to run this card, 64 bit drivers aren’t out at the time of this writing. There are Linux drivers but they don’t support DTS nor Dolby. This isn’t a failing of the card or chipset but rather the license holders of those technologies. They have no plans to allow their tech into open source.

Other than the one problem I ran into with the SPDIF input I’ve yet to encounter any issues with this card. The drivers are stable and I haven’t seen any compatibility issues, at all. I do wish that someone running the C-Media chipsets on their cards would go the extra mile and give us more customizing abilities with soundfields, it’s something the VIA cards and Creative cards have had for years. Leaving it out on C-Media cards is nearly criminal. After looking at the card and experiencing what it has to offer I’m awarding the Auzentech X-Meridian an 8/10 and our Editor’s Choice award. Fix the SPDIF issue and add in some soundfield controls and we’ll talk about a natural strike.