It could be a place, a person, a soccer club, a submarine, a compact car, or even a CPU. Whatever the reason for the name, the Toledo 301 mid-tower case from AZZATek is what I have on the table today. As I have been eyeballing AZZA’s products for some time now, I’ve been anxious to see what the company’s latest release has to offer.

For those who may not know about the company, it was formed in 1996 and started life as a motherboard manufacturer. Eventually it transitioned over to an OEM case and power supply role and then the folks there decided to strike out under the name that it carries today. The company biography also mentions that it donates 50% of its net profit to charity. Buy some kit, help a kid! 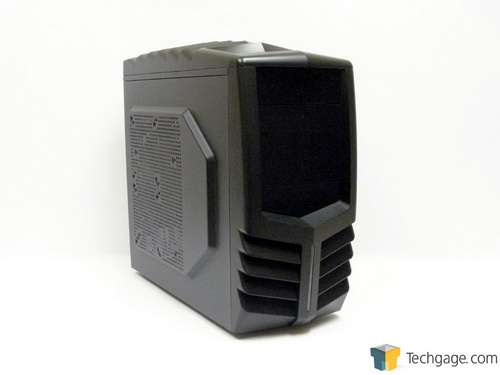 We’ll start the tour with a look at the front panel. Hidden behind the lower vents is a 120mm blue LED fan to pull cool air into the system and push it across the hard drives. Down the center of these vents is an LED strip for some extra color, and above are the mesh covers for the 3.5″ and four 5.25″ drive bays, none of which feature dust filters. 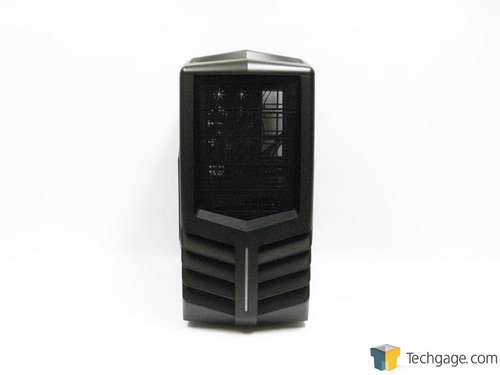 Held on by two thumb screws, the left panel features something fun; a 250mm blue LED fan! Bigger may not always better but there’s just something awesome about a fan this large (grunt, grunt). If the stock fan doesn’t do the job, it can be removed and replaced with up to four 120mm fans. Seeing how a fan this large would interfere with some of the taller tower CPU coolers, AZZA has chosen to mount it on the flared section of the panel to bring it away from the motherboard to allow for an extra bit of clearance. 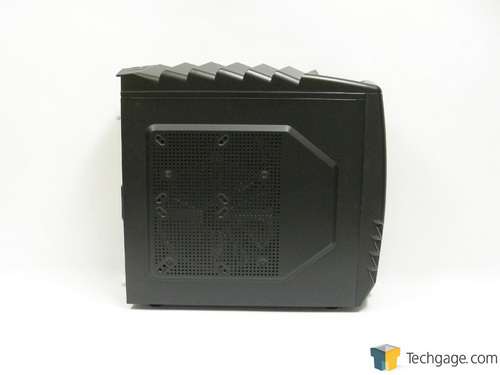 Moving around the back we see the motherboard I/O opening at the top left. To the right are two large holes with rubber grommets for some water cooling fun and a 120mm non-LED exhaust fan just below that. Working our way down, there are seven vented, reusable PCI slot covers, a vented area with two additional spots for running more hoses and below that, the opening for the power supply. 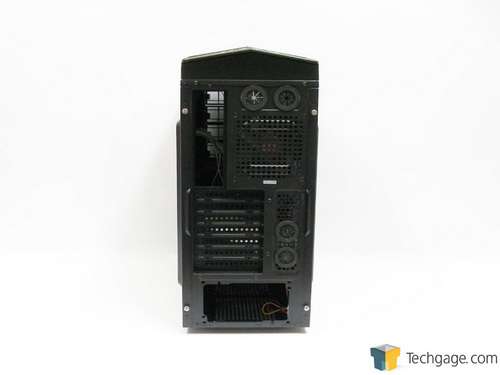 I generally don’t spend time on the right side of most cases, but this one deserves a quick mention because it features something that I wish more companies would incorporate in their own designs. Just like the left side of the Toledo 301, the right is also flared to allow for extra space for routing cables. As with the left panel, this one is also held on with two thumb screws. 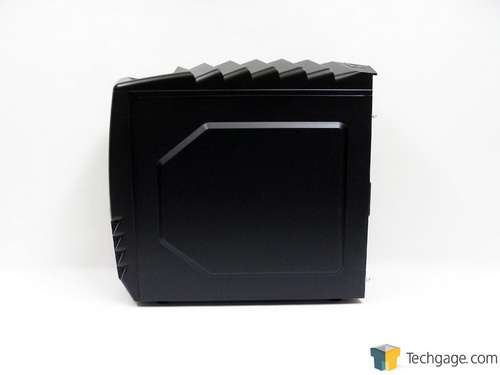 Let’s go up top and check out the I/O area. On the front left is the reset button and hard drive activity LED just above it. The center features two USB 2.0 connections that flank the 3.5mm microphone and headphone jacks. USB ports in this configuration will allow a large or thick USB drive to be used without blocking off the other port. Finally, over on the right is a nice big power button with a ring around it that glows blue when the system is powered on. 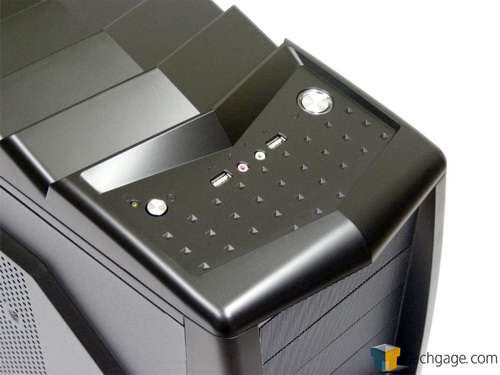 Directly behind the I/O area are several large vents with the AZZA name at the very back. What could be under these vents? I wonder. How about room for two 120mm fans? Not impressed? Read on. 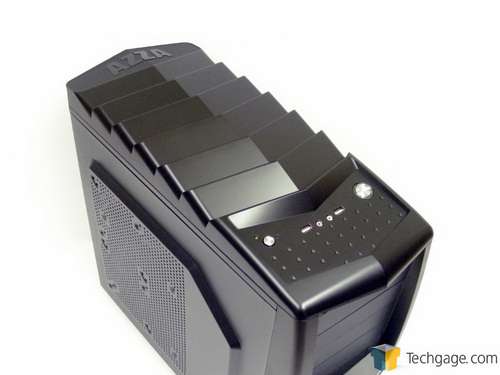 Flipping the case over, the bottom features four hard plastic feet to lift the case off the ground, but do little to prevent slipping or absorb noise caused by vibration. Another 120mm fan can be mounted in the center with the power supply directly behind it. The power supply can be mounted fan down to draw in cool air, however neither openings have a dust filter. 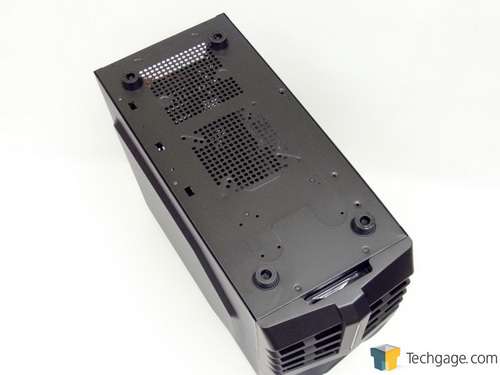 Now it’s time to have a look at the guts, so it’s off with the panels!