I had high hopes for this case since I’m all about competition in the different hardware sectors, but unfortunately, there were problems with it from the very start.

I’m a big fan of built-in motherboard standoffs, however the Toledo only has them in the standard configuration for full-size ATX boards. In the case of this build, where a micro-ATX motherboard was used, there was nothing to secure it to along the bottom edge.

Also, the hole in one of the motherboard mounts down the right side was too large, meaning the screw would not tighten leaving the build with three unsecured points. Since there are no pre-drilled holes to add additional standoffs if needed, I had to support the motherboard with my finger when it came time to attach the front panel leads to the headers along the bottom, or risk having the board flex to an extreme degree. 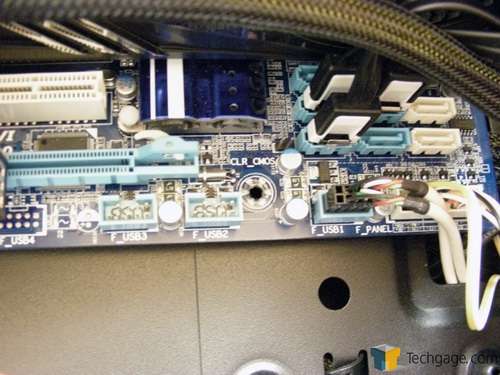 I was also left with only two screws holding the power supply in place as well because the mounting points on the case did not line up with the screw holes on the power supply itself. This seems to be caused by the two metal braces that are bent out towards the power supply. These braces come out too far and pushes the power supply ever-so-slightly out of position. It’s a good thing I don’t need to lug this rig to a LAN party or it might not survive the trip. 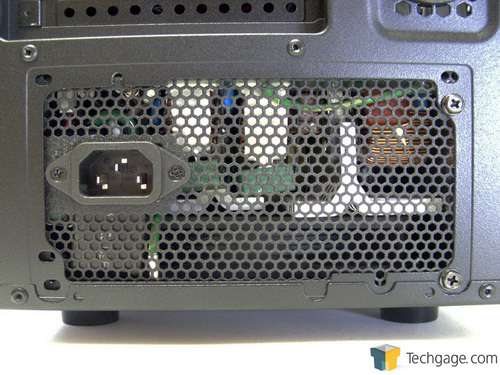 Overall, the inside of the Toledo is quite cramped. I’m not sure why I didn’t catch this earlier but standard width motherboards will block off most of the cable management areas running down the right side of the motherboard tray. Narrow motherboards that only make use of the left and middle rows of standoffs such as the GIGABYTE GA-P55-US3L for instance, will be fine. 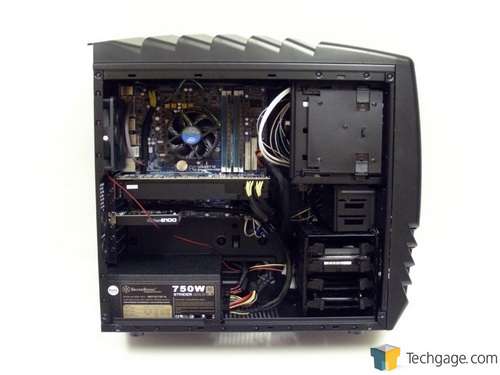 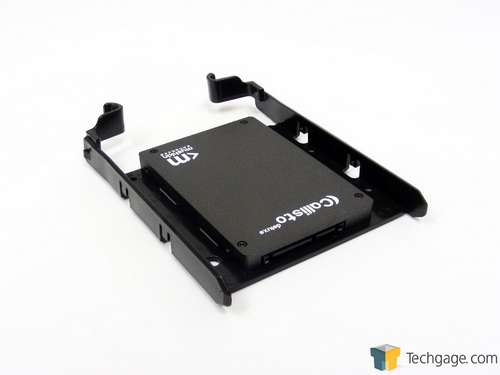 Even though the right side of the case is flared out, there is still not much room behind the motherboard tray. If the side wasn’t flared, hiding all but the thinnest cables would be impossible. Luckily, the metal loops where the included cable ties can be installed will allow users to keep things in order so that the side panel can be secured. 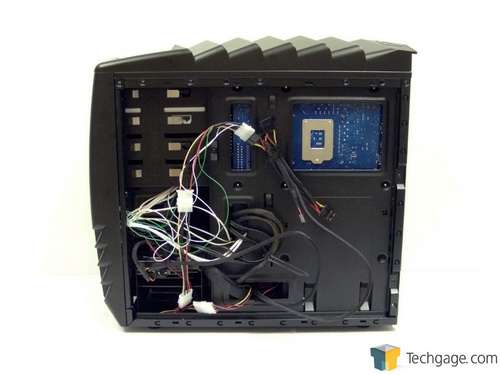 For testing, the stock CPU cooler was used. Due to the fact that the stock cooler is grossly underpowered, even running LinX through OCCT to test full load temperatures proved to be too dangerous as they went into the 90s. Due to this, only stock idle CPU temperatures are reported.

GPU load temperatures were generated with a 20 minute run of OCCT’s built-in GPU test. The test was performed at stock speeds and again while overclocked. The final clocks were 1020MHz on the core and 1200MHz for the memory with a +0.025V increase using Sapphire Technology’s TriXX overclocking utility. Stability testing was done prior to ensure the GPU test completes the full run with AIDA64 Extreme Engineer monitoring and recording all temperatures. 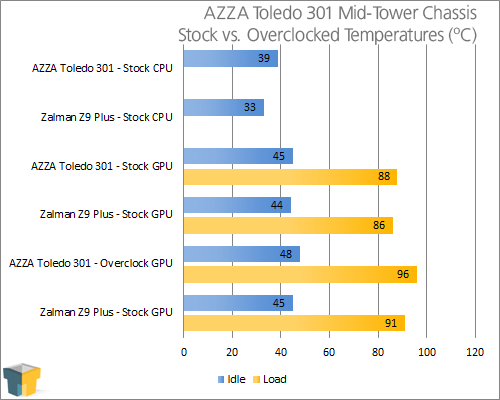 As I mentioned before, bigger is not always better and it seems that I was right. The 250mm fan side fan was whisper quiet but didn’t pull enough air into the system to even keep a piece of paper stuck to the side. The front fan also seems to be very under powered and since there are no model numbers on either one, just the AZZA sticker, there is no telling if they are operating within spec. The end result is nearly silent operation but at the expense of cooling.

Our case testing system should be ready soon so once the components are finalized, a database of stock and overclocked CPU and GPU temperatures will be built for comparison purposes.

Despite all of these shortcomings, there are things that the Toledo 301 does well, so I’ll sum it all up on the final page.