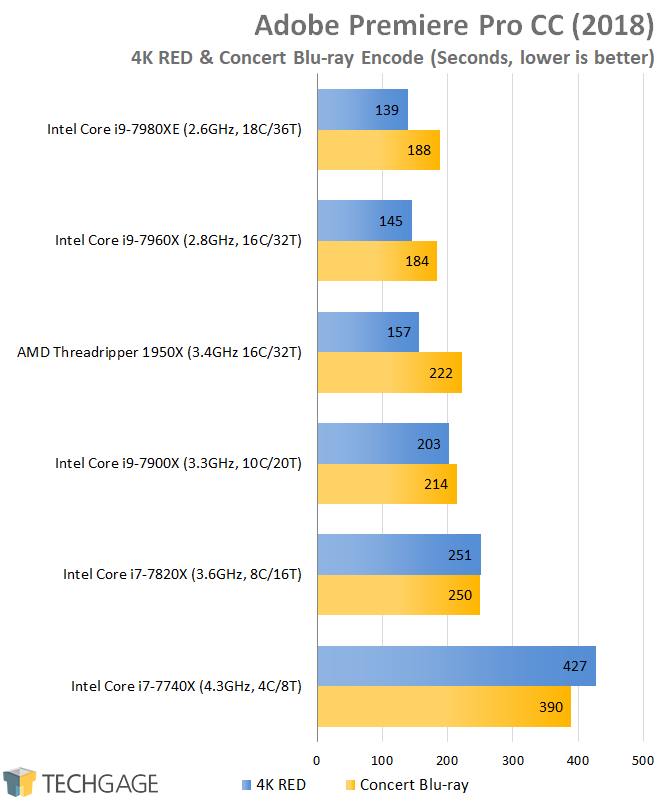 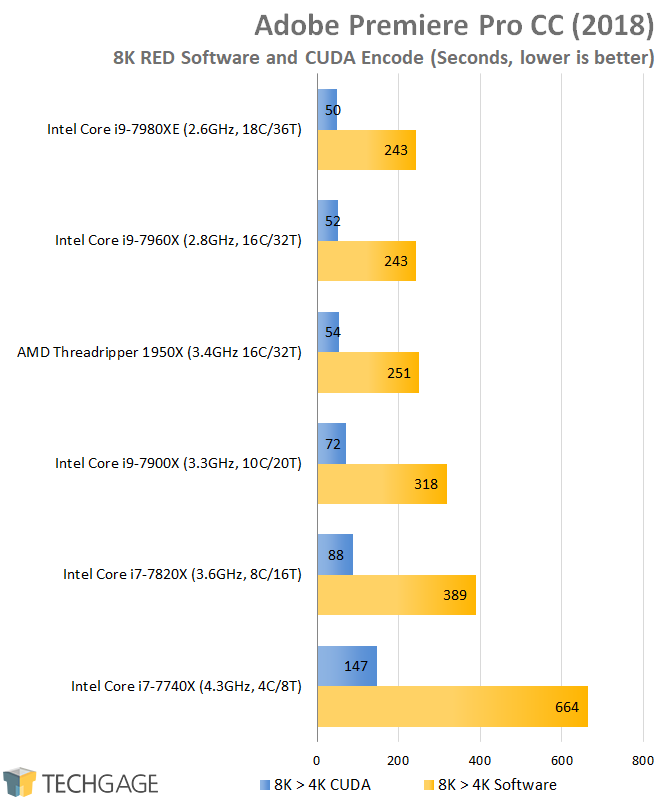 This article marks the first where I’ve been able to include 8K tests, and I’m glad I was able to, because it paints a better picture of performance scaling overall. In many cases, I’ve found 1080p encodes to utilize a many core chip poorly, but based on the results of the Pixies Blu-ray concert encode here, it does indeed seem to scale quite well today. We’re talking a straight-forward Blu-ray rip – one encode to another. The 4K encode scales pretty much perfectly with what I’d expect, with Threadripper falling behind a bit, but still proving impressive given Intel’s long-standing prowess in encoding.

At 8K, I decided to test the encode both with the software encoder, and NVIDIA’s CUDA encoder. In the past, I didn’t see notable gains in a GPU-based encode on a beefier CPU, but these results changed that up completely.

When an encode can take advantage of the GPU, it’s like sinking a hot knife into cold butter. That might make it seem like the CPU is irrelevant, but not so. The faster the CPU, the faster the overall encode. In some cases. 8K is a specific beast, and chances are, if you’re dabbling with it, you probably already know that you need a ton of horsepower.

One last thing before moving on: 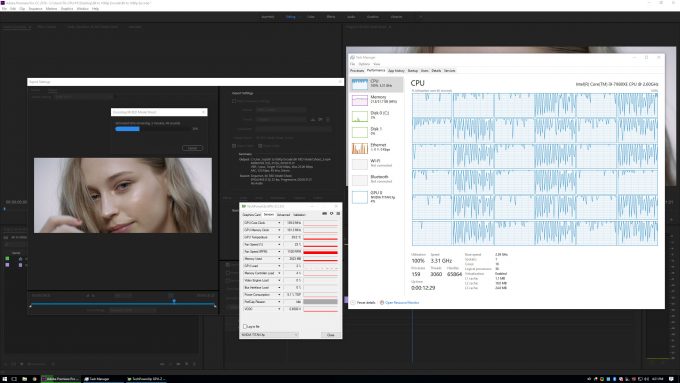 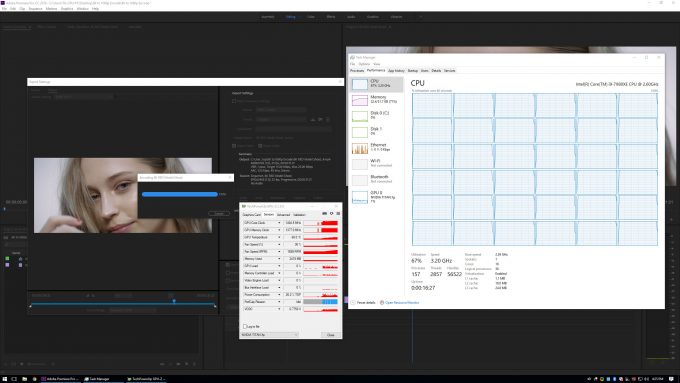 In the first shot above, you’ll see the software-based encode running. In Task Manager, there’s sporadic usage across the cores, hinting at possible inefficiencies. On the bottom, we have the CUDA encode, which doesn’t just encode faster overall, it seems to maximize the CPU better – getting more work done in less time. Since the gains from moving to the GPU encoder are so extreme, it’s hard to gauge the true before/after difference of the CPU with that type of encode. Still, results like these are not just good for NVIDIA, but AMD and Intel, too.

There could be some cases where performance won’t always scale like this, because not all projects are alike. But for a straight-forward encode with a RED file right out of the camera, it’s clear that managing 8K projects is not for the faint of heart. Or, at least those with weak hardware. 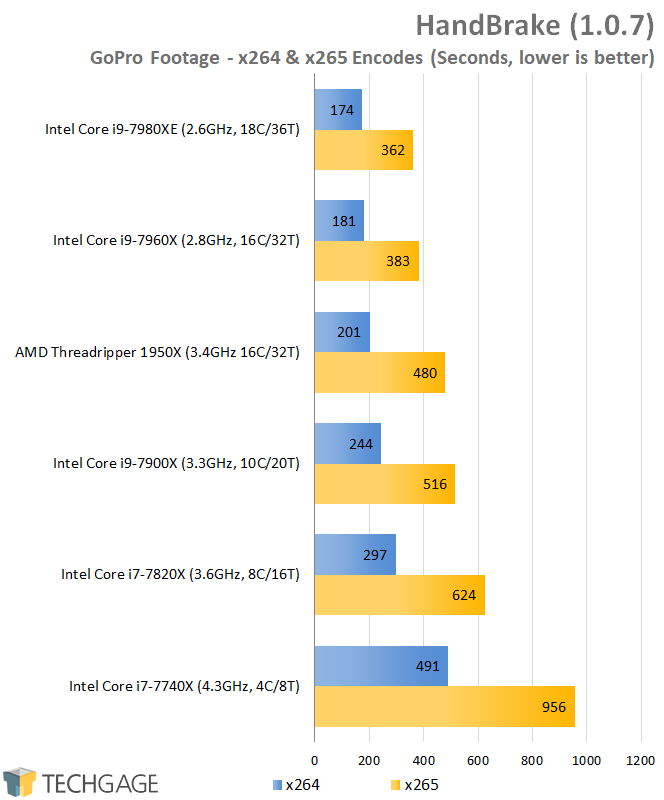 Intel’s long-standing encoding dominance can be seen again with HandBrake, although AMD’s Threadripper provides enough brute force to compete hard. At the $1,000 price point, AMD wins at the game Intel technically should. That’s pretty disruptive, but the good kind (for consumers anyway). 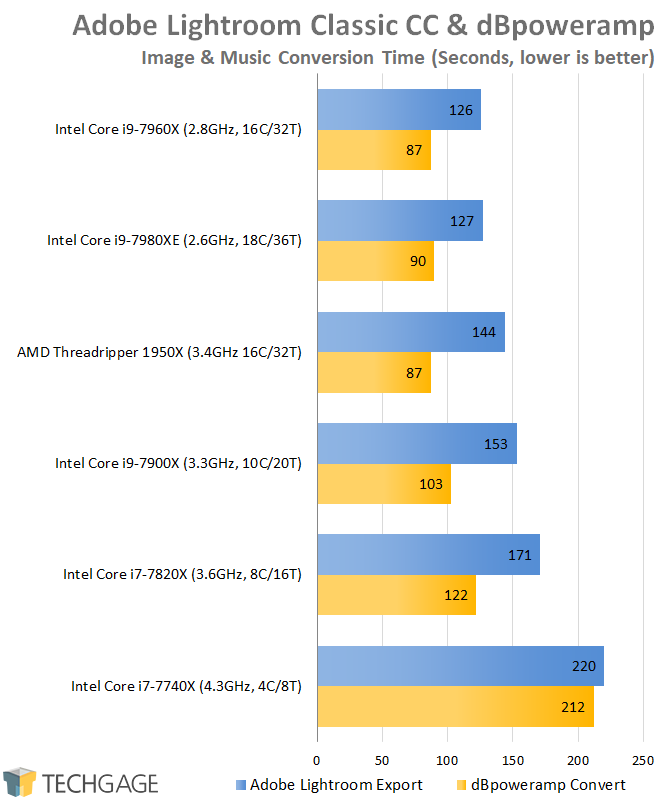 dBpoweramp can’t take advantage of more than 16 threads, but interestingly, the CPUs with more than 16 threads continue to scale decently well. In another oddity, the 18-core chip falls to Intel’s own 16-core, and meanwhile, the 1950X keeps right on up. But, tying into that Intel media prowess again, Intel’s strengths in Lightroom are easy to spot. I’d be remiss to not highlight the fact that Threadripper bests Intel’s same-priced 7900X. This is why competition is so important, and why content like this is so much fun to put together.