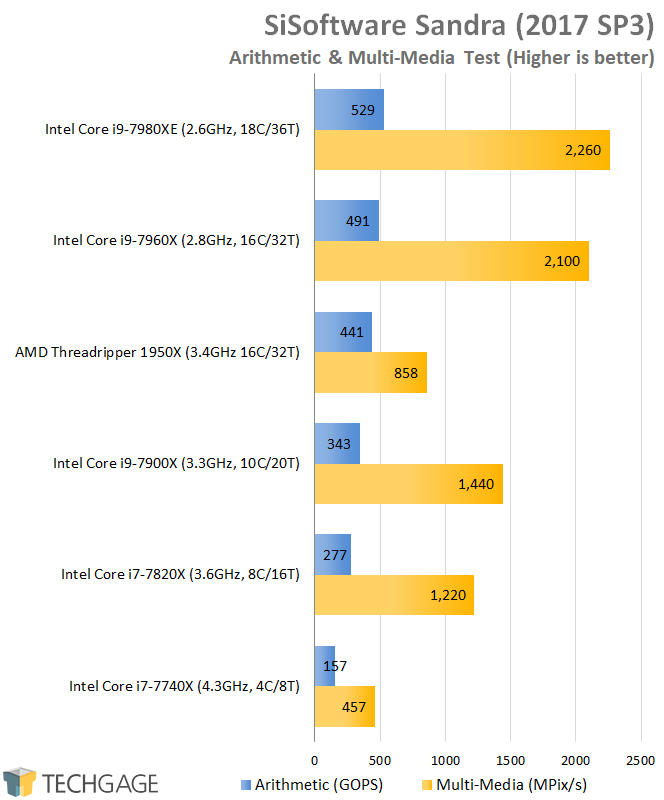 I harped on quite a bit about Intel’s strong media performance, and Sandra has come to solidify that fact. As seen on the previous page, AMD’s Threadripper isn’t weak at all when it comes to intensive media tests, so a result like this is a little off-putting. In reality, Intel’s chips were tested with the wide AVX512, while AMD’s was tested using AVX2, the same as the Kaby Lake-X 7740X, which also reflected obviously severed performance.

In the arithmetic test, AMD’s chip fell short of Intel’s 16-core, but again, this isn’t too surprising given the known IPC advantages on Intel. From a value perspective, AMD’s overall performance is strong (just look elsewhere for AVX512). 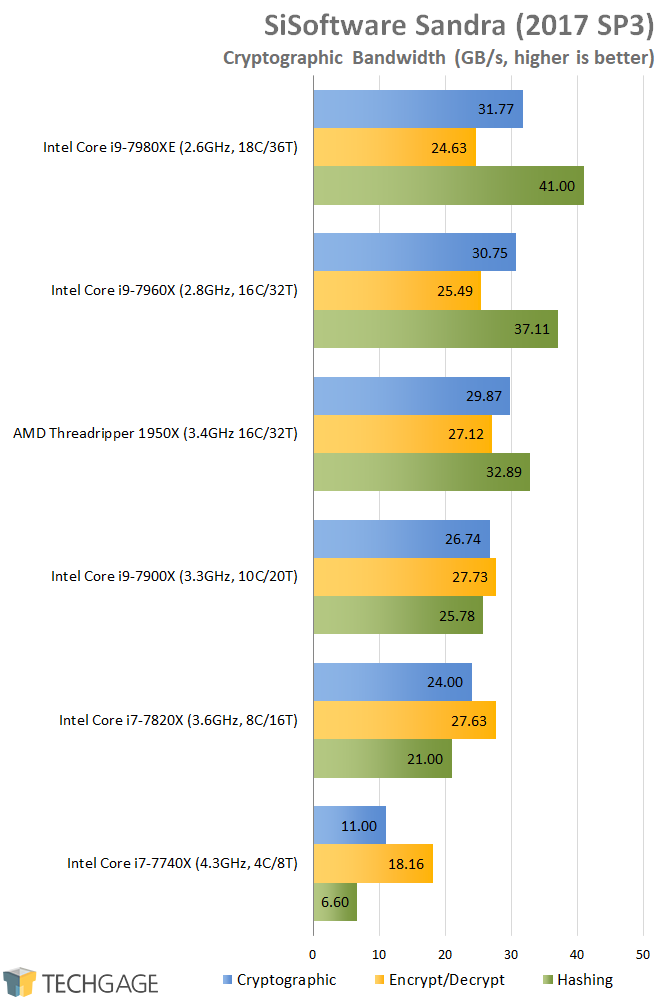 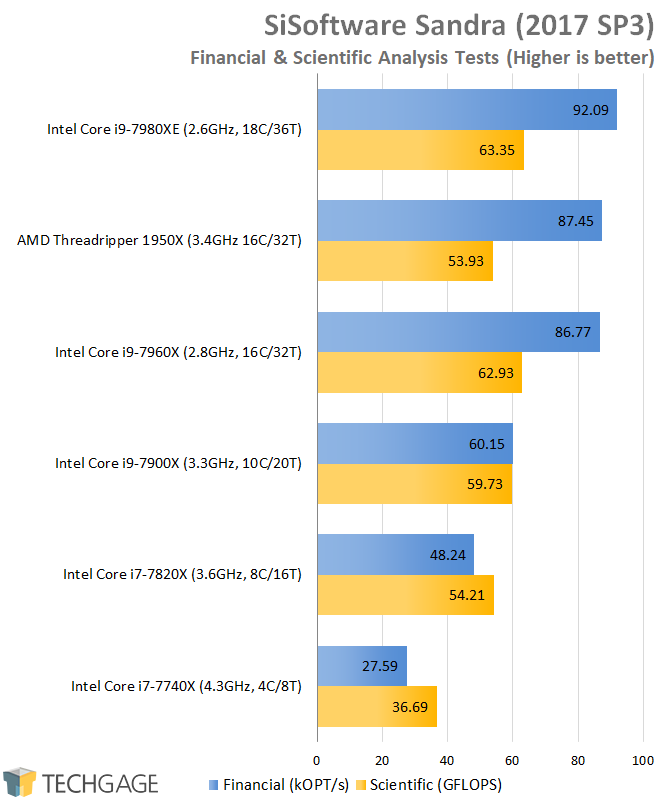 Here’s where things got weird. I’m not sure if it’s a bug in Sandra, or the fault of my system, but with the default configuration, the Scientific test refused to complete on Threadripper. However, enabling the NUMA memory mode did allow it to run; thus, the Scientific test above for Threadripper is using the NUMA mode (not that I expect much of a real-world difference given other tests conducted).

In the Financial test, AMD impresses. It didn’t beat Intel’s chip by much, but given the blue team’s stronger IPC performance, AMD did well to conquer here. 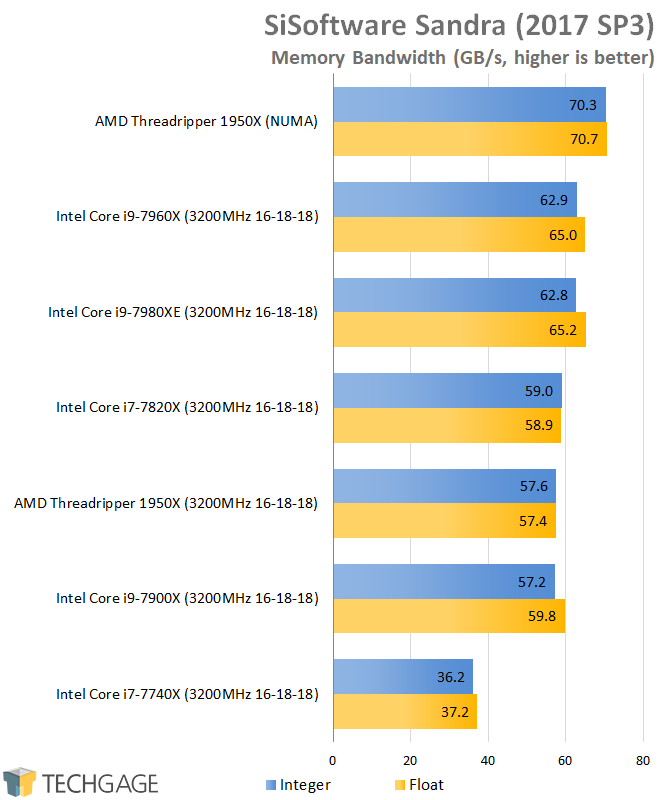 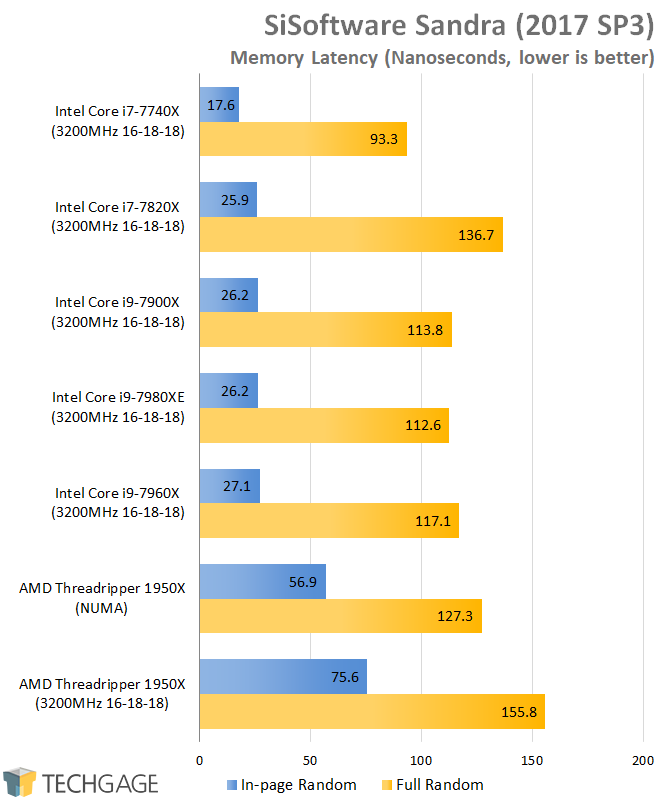 As a one-off addition, both of the charts above include a NUMA configuration for Threadripper, simply to see what’s possible. In testing, I found a general lack of difference in performance in most tests except bandwidth and latency. In every other case, I actually saw reduced performance using NUMA, so if you use the setting, put your benchmarkers’ cap on, because you need to know how it affects your workflow.

With NUMA, AMD’s chip sweeps the floor with the rest of them, breaking through the 70GB/s mark. Without NUMA, Threadripper falls behind the Intel rigs using the same exact memory, but only the dual-channel 7740X slouch could really be pointed and laughed at here.