As such, our game testing revolves around 1080p, and sometimes 1440p, with games being equipped with moderate graphics detail (not low-end, but not high-end, either). These settings shouldn’t prove to be much of a burden for the TITAN Xp GPU. For those interested in the settings used for each game, hit up page 2 (a link is found at the top of this page). 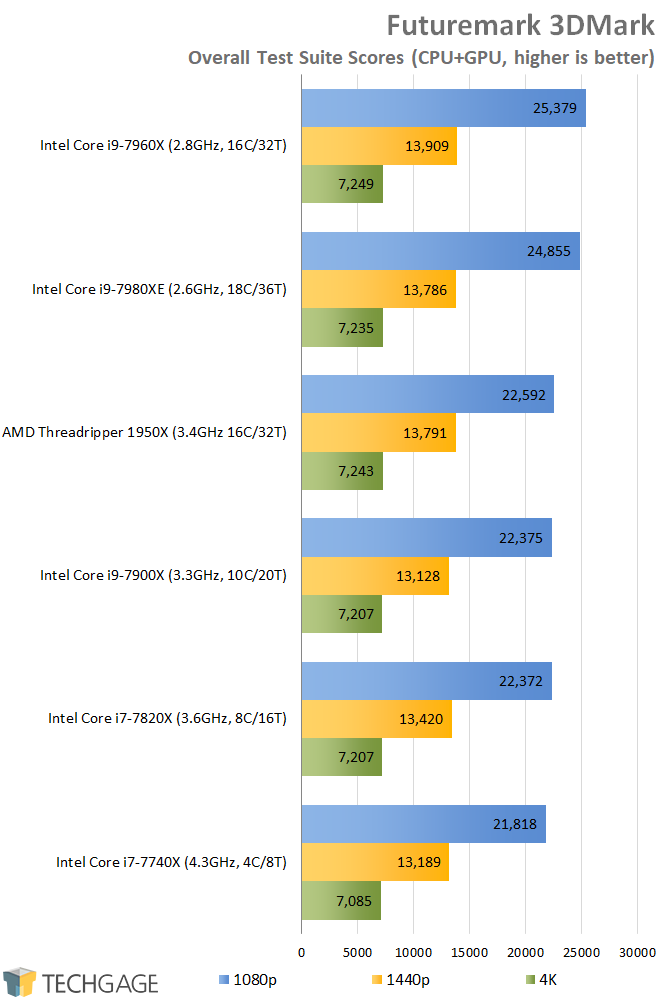 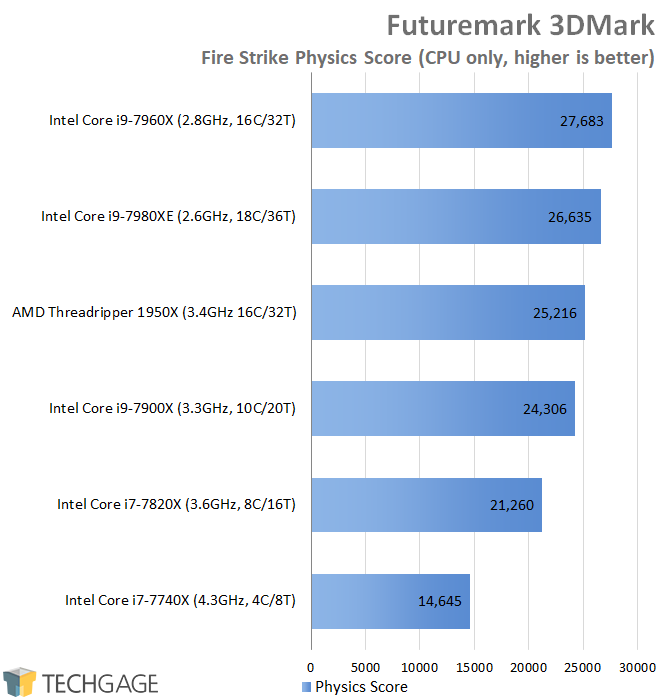 The scaling here isn’t unexpected, but it is worth noting that AMD’s chip performed very well against its equal-priced competition, Intel’s i9-7900X. But how about some actual games?

Ashes of the Singularity: Escalation 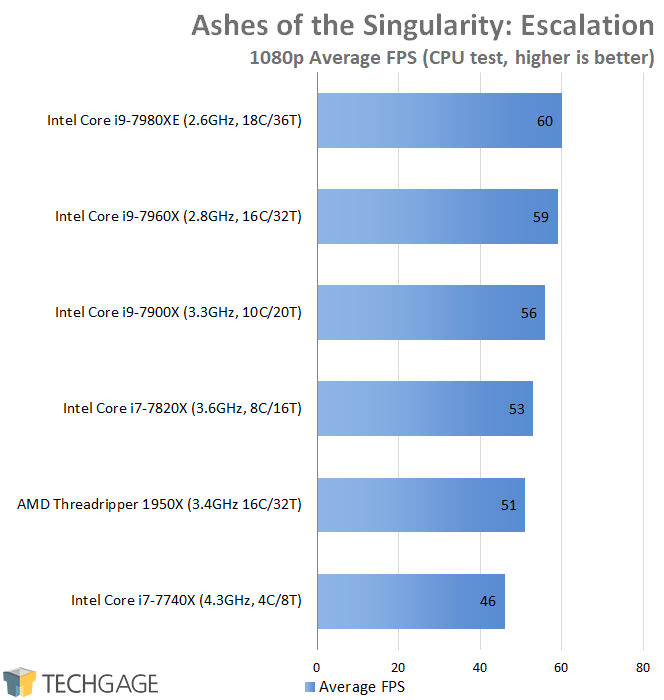 Ashes is a very unusual game, in that its benchmark is actually a great benchmark for gauging the overall performance out of a GPU or CPU. The gains at the top are incredibly minor, and pretty minor in the real-world, but it does show that if games take proper advantage of all the cores they’re given, we could begin to see some really cool gaming enhancements (not that everyone is going to run out and buy an 18-core CPU). 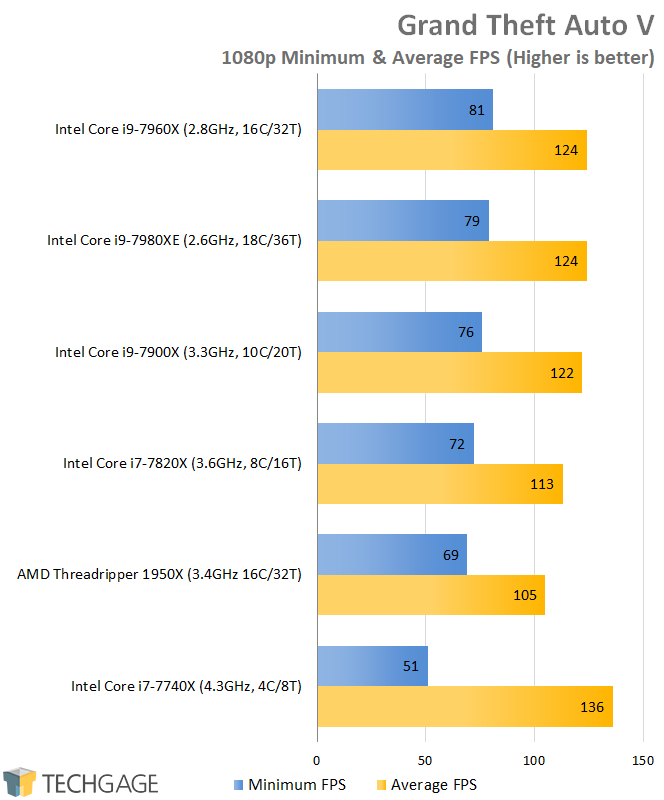 I had plans to benchmark GTA V at both 1080p and 4K with the latest suite overhaul, but after testing a couple of CPUs, I found that the results were barely different at either of those resolutions. That’d imply the CPU doesn’t play much of a role in the game’s overall framerate, yet we can still see some clear differences here.

This is one game that doesn’t favor AMD’s hardware too much, and while the game won’t take advantage of too many cores, the beefier chips still somehow manage to deliver better overall framerates.

What’s really interesting is how much the i7-7740X croaked with this game. Technically, it should be capable, but as soon as I entered the test level with that chip, I’d experience regular stutters every 10 seconds or so. The problem was repeatable, and not seen on the other chips tested.

To give some back story, when I supply a minimum FPS here, it’s the lowest of the two runs that I conducted; not an average. If the deltas between the two runs vary too much, a third run is brought in to paint a better picture. With the 7740X and GTA V, I found that there was a 50% chance that the minimum would be low or high. For whatever reason, that chip does not like GTA V, despite delivering the best average FPS of the entire bunch. Thus, I think it’s safer to stick to the lower minimum reported FPS. 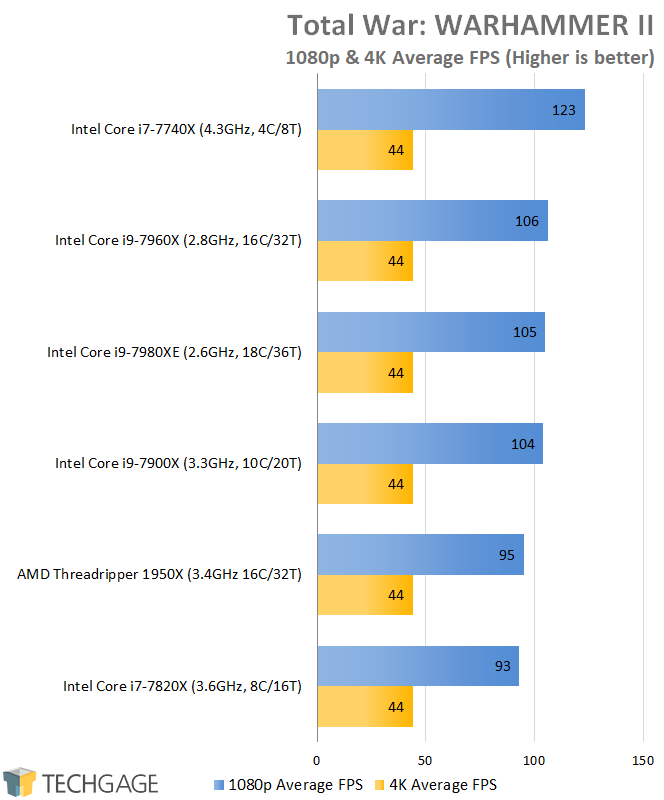 The results from this game are hard to figure out, based on the testing I’ve done up to this point. It feels like both the clock speed and number of cores can play a role in this game’s performance, but ultimately, there’s no clear sign – outside of the fact that the fastest chip here exhibits a strong lead at 1080p.

Threadripper falls behind Intel’s top chips again, but so does the Core i7-7820X. It begs the question of what a 7740X-clocked 7820X could do, which sounds like a fun test once I plop the CPU back in the test rig.

Oh – and in case it isn’t obvious, the CPU doesn’t matter too much for this game at 4K. 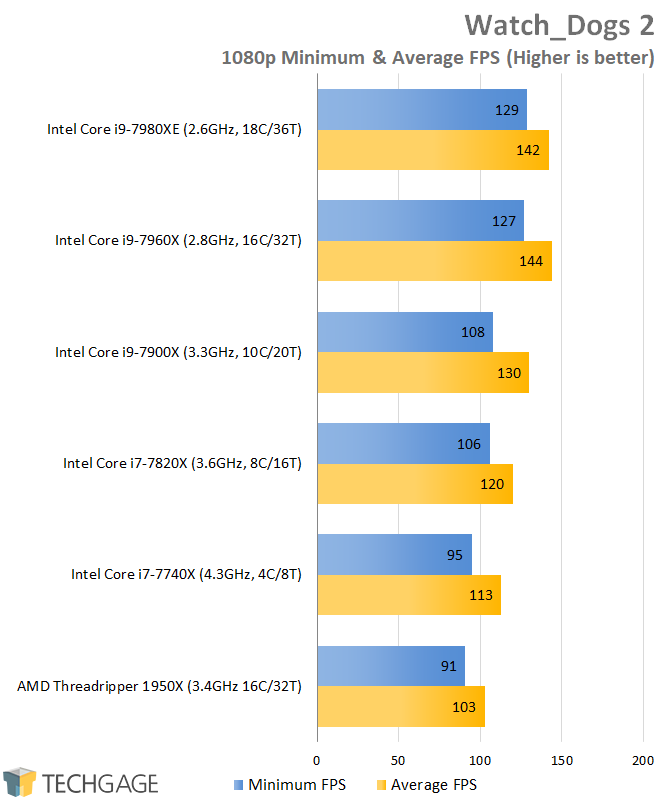 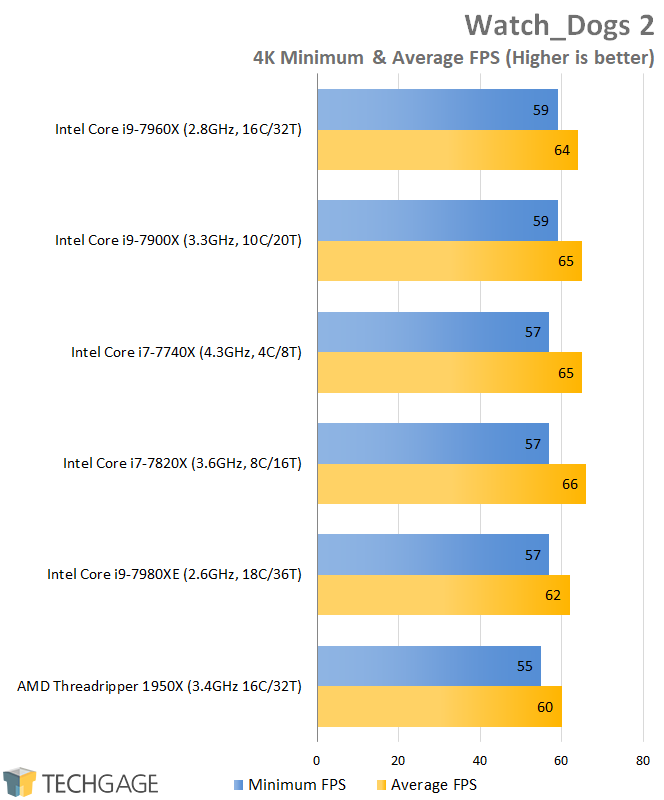 With this dual 1080p / 4K look, we see a picture we’ve seen painted many times before. AMD’s performance is definitively weaker than Intel’s (not a surprise when Intel’s logo graces the splash screen), but it’s not to a worrying degree. This is one game where a clearer difference is seen at 4K than with many games, though the overall performance of the Intel chips really seem to follow no rhyme or reason.