To generate power-draw results for our collection of CPUs, we plug the test PC into a Kill-a-Watt for real-time monitoring, and stress the CPU with the help of POV-Ray’s multi-threaded test (which can peak 100% of cores in our tests). Idle power consumption is measured about 5 minutes after boot, once Windows decides to calm down and the wattage reading keeps stable. 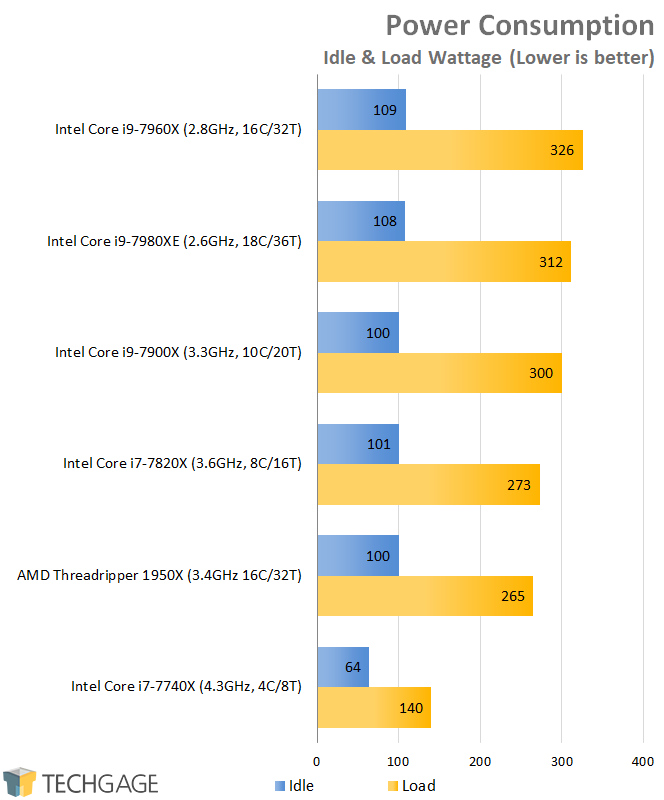 I could do without oddities creeping up in my test results, so I’m sure glad to experience an awful lot of them. Here, the 18-core fell behind the 16-core overall, which isn’t scaling shared by other media outlets I’ve checked out. My theory is that POV-Ray is a weak test of power consumption, despite it proving suitable in initial testing. I feel like the 18-core completes the test so quickly, that it doesn’t have time to fully “heat up”, though I could find holes in the theory.

Nonetheless, this is one test where AMD proves extremely impressive. Intel’s 16-core draws some 61W more than AMD’s, which feels pretty damn weird to say, after years of the opposite being true. I will give some credit to Intel, though, because all of these CPUs are crazy efficient in the grand scheme of things. Remember when 600W power supplies felt required? Here’s a test PC with a top-of-the-line GPU with top-of-the-line CPUs and lots of memory – and we’re peaking at 326W.

The title of this article doesn’t pose a question as to whether or not one of these 16-core CPUs is better than the other, because it’d be a little dumb due to the obvious answer. At present, Intel shines in some scenarios, but leads in most. But AMD’s no slouch, with super-strong memory bandwidth and power consumption.

Actually, let’s face it: this article is kind of dumb. Everyone knew coming in that Intel’s Core i9-7960X was going to beat out AMD’s Threadripper 1950X, so really – what is this farce? Well, it acts as a solid set of results to highlight areas where each chip excels, especially where price is concerned. 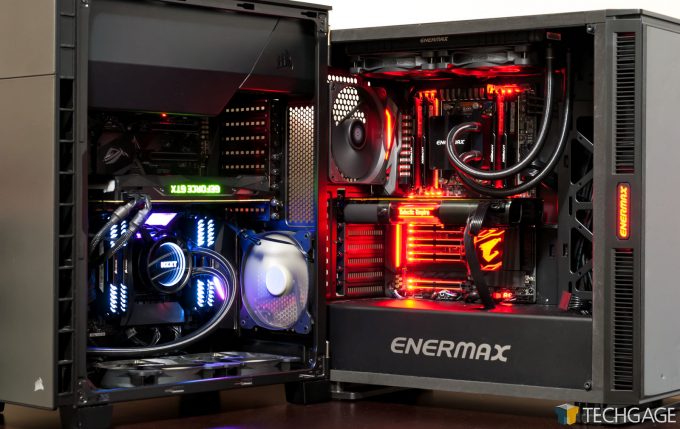 For those who want the ultimate in gaming and overall performance, and don’t mind spending more for it, Intel is way to go. That’s a fact that could be a bit of a saving grace for the company, as forthcoming security patches are said to affect certain workloads (namely I/O related, but it’s still early days). I personally believe that Intel’s SRP for its biggest chips are high, but with the performance crown, it’s stubborn.

Threadripper, overall, is the better value between these 16-cores. However, while some of AMD’s shortcomings were modest overall, there were some more pronounced differences speckled about. In gaming, AMD continually falls behind, but fortunately, the biggest drops are seen at lower resolutions. It can be assumed that if you’re planning to go with a thousand dollar chip, you’re probably going to opt for something better than 1080p, and even then… we’re talking 100+ FPS to begin with.

And that’s really all that can be said about that. Intel offers the highest performing desktop chips, and at the top end at least, you’ll be paying for it. Meanwhile, AMD is king if you want the best bang-for-the-buck. That all said: before you settle on either, you need to investigate how you plan to take advantage of the power availed to you. As clearly seen in the results on the previous pages, not all applications use AMD and Intel the same. One may have strengths more important to your typical workloads, so I’d caution against being hasty with that credit card.

If you have any reservations or further questions, leave a comment below!