CES is now long over, but the most recent event turned out to be a good one, although it’s been argued to be one of the more stale shows in recent memory by many. But, to say that nothing good could be found throughout CES’ many halls would be hugely inaccurate.

Although TV-enthusiasts were certainly in geek-heaven, there were numerous products that caught our eye as well – products that wouldn’t leave our minds, even long after our first look. So, it would be fitting to complete our CES coverage for 2008 with a “Best Of” awards article.

We should make one thing clear: None of the choices here were taken lightly. These are products that left such an impression on us, we continued to think about them long-after our first encounter. If it’s here, it’s a stellar product that deserves recognition.

It should be also mentioned that even though some products impressed us, they are not included here for various reasons. When thinking up products for inclusion, we wanted our selections to be those that consumers could actually purchase now, or at least very soon. Therefore, a 150″ Plasma television or other prototypes, despite being impressive, are not included.

In all, ten products were chosen for our award this year. Because we had a small workforce at the show, it was virtually impossible for us to notice every product worthy of recognition, so some may not be mentioned due to that fact. If that’s the case, feel free to voice your opinions in our related thread! 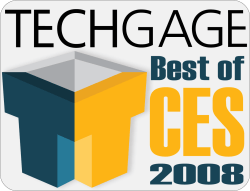 Following that, our resident networking-guru Greg takes a look at Logitech’s Squeezebox Duet and also Netgear’s brand-new high-end ReadyNAS Duo. Kiersten helps wrap things up with Seamless Internet’s S-Xgen, NoahPad and BugLabs. In case you didn’t notice, Logitech walked away with two out of our ten awards… and they only released five products! That’s impressive.

Let’s continue on with our Best Of CES 2008 awards.

There’s no shortage of gaming-notebooks available, but a problem for many will rise when pricing is brought into the picture. Sure, a mid-range gaming notebook might look good, but many cannot even handle games at the displays native resolution without looking like a true mess. Thanks to that simple fact, many are left with a product that may not live up to their expectations.

Taking that into consideration, it’s easy to understand why you should be interested in Gateway’s latest gaming notebook series. Gateway first unveiled their FX line-up at last-years CES, however, the moniker was exclusive to their desktops. CES 2008 marks the launch of their FX notebook lineup. 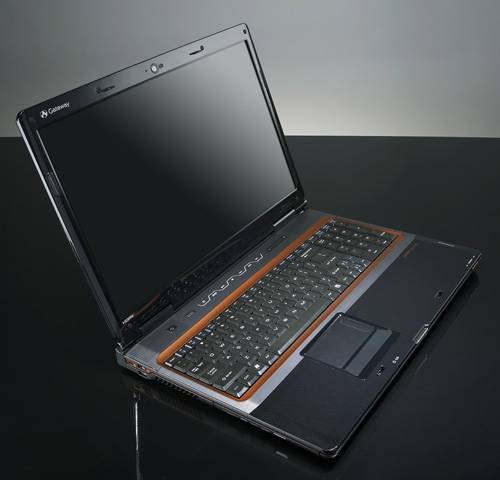 The FX notebook series consists of four models which run between $1,349 and $2,999USD. Yes, the top-end offering is impressive, but price-wise, it’s the lowest offering that’s important. The P-6831FX is equipped with an Intel Core 2 Duo 1.60GHz Dual-Core processor, 3072MB (3GB) of DDR2-667 memory, a huge 250GB 5400RPM hard drive, a multi-layer DVD-RW drive which includes LabelFlash support and last but not least, a just-announced NVIDIA 8800M GTS graphics card with 512MB of GDDR3 memory.

Gateway didn’t jump into the gaming notebook realm without performing extensive R&D first – and it shows. The P-6831FX has great styling, excellent gaming performance, and a $1,349 price tag. It well-deserves our CES 2008 Best Of award for being the only notebook at CES that we really wanted to own ourselves.

Given the size of Logitech as a company, it’s rare to not see something interesting from them at CES, and 2008’s event was no different. During a private luncheon, we were shown first-hand the latest diNovo media keyboard. We have taken a look at the diNovo Edge keyboard in the past and were impressed with it’s styling and functionality. The diNovo Mini takes what many loved about that model and made it smaller.

I have to admit, when I first saw this keyboard on stage, I thought it was kind of ridiculous. “Surely, it wouldn’t make much sense to have such a small keyboard – even for a media PC”. Once I got my hands on one however, opinions were changed. 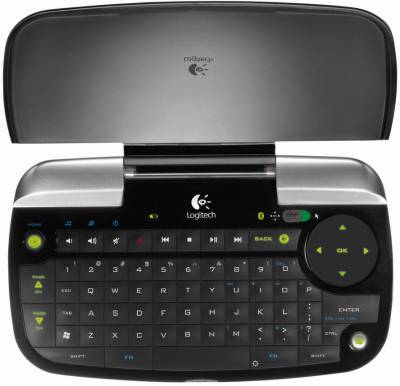 The Mini is not designed to totally replace a full-fledged keyboard, because quite frankly, typing out e-mails and the like will be slowed down due to the size. If you happen to be one of those texting-demons that can type on a small keyboard very fast, then you should feel right at home.

The entire keyboard is held like a portable game system. Speaking comparatively, the diNovo Mini is smaller all-around than a Sony PSP and is roughly the same size as a Nintendo DS. Despite the keyboards size, the Mini includes all of the keys you will need and even a mouse, a la diNovo Edge. Since most people will be using the diNovo Mini with a Vista machine, Logitech included a quick method for using CTRL+ATL+DEL. Simply push the Fn key and then Enter.

It’s a small product, but the price tag is on par with other full-size media keyboard at $149.99USD. The price doesn’t have an effect on how cool the product is however, and I personally find it reasonable. It’s a full-fledged media keyboard in a small package that will look great whether it’s in your hands or on the coffee table, all while being simple to use. You can pick up a diNovo Mini at the end of this month or early February.