CoolIT, an Alberta-based company, first came to market with their Freezone and Beverage Chiller in 2005 but have since grown exponentially and now offer a wide-variety of products. Their growth is incredible. At last years CES, they occupied a booth in the middle of the Sands Convention Center, taking up two spots total. This year, their booth was twice that size and right beside the entrance. They have intentions of having a booth size twice that for next year.

Up until late last year, CoolIT have been recognized for high-performance CPU cooling only. The Freezone and Eliminator TEC-based coolers offer far better performance than air and water, making overclocking a simple task. However, the company is now branching out in all directions, with the one catching my eye being their GPU coolers, the NVIDIA model in particular.

As you can see in the photo below, the entire system is comprised of a dual-5.25″ bay enclosure and two separate GPU coolers. CoolIT touts the fact that the unit is all-in-one… even the liquid is self-contained and should never need touching. By the looks of things, the cards need to be attached to the coolers prior to installation in the PC to allow enough room to work. Once the coolers are installed, they can be passed through the large open bays in your chassis and reach down to your motherboard. Once the power connectors are all plugged in, you should be good to go. 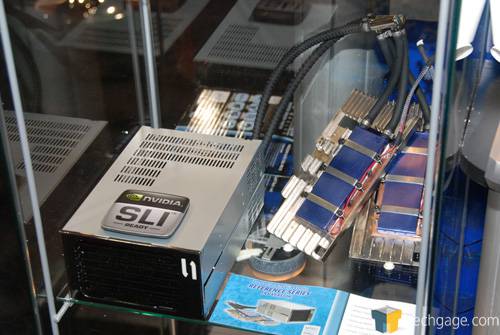 Though difficult to tell at a convention center, CoolIT promised very silent cooling with the help of multiple 80-mm fans inside the bay. The entire unit is pre-installed with coolant, so this setup should be straight-forward for most anyone. Performance-wise, I was told that the 8800GTX could see temperature decreases of up to 40%, including 3-Way SLI use.

CoolIT are not the only ones who believe in the performance and setup of these coolers either. The company has paired up with PNY to release special edition 8800 Ultra cards with their coolers pre-installed. These cards will be available towards the end of Q1 and will retail for $599. The upside is that your computer will run cooler due to single-slot cooling solutions and more room for airflow. You can pick up the Dual Drive Bay VGA Cooler for both NVIDIA and ATI cards (ATI version excludes use of TECs) soon, for around $299.99USD.

Seagate’s Maxtor Shared Storage “NAS” box is not that new, however the software update that we saw at CES is. First and foremost, the main product here is the Maxtor Shared Storage, which comes in 320GB, 500GB and 1TB sizes. It connects to the network like other NAS boxes and includes fast 7200RPM hard-drives, so streaming audio/video across a network should be no problem.

I mention network though, and that’s the downside. Accessing the data around your house is not a problem with most NAS boxes, but what about accessing the same data when out on the road, whether on a trip or across town at a buddies house? That’s where the new Central Axis software will come into play. 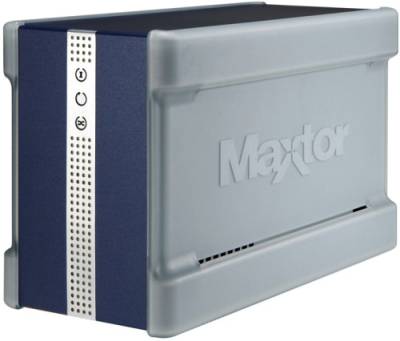 Due in the spring, this free update will allow you to set up a server of sorts, so that accessing the data while out on the road a breeze. In the past, I’ve used many various methods for setting up a server, such as setting up an FTP server or connecting via SSH, but this method, by far, blows the ease of use out of the water.

Seagate promises that the software installation will be painless and that the user will not have to worry about much hassle along the way, such as dealing with firewalls. Once set up, you will be able to login via the Seagate website which will connect to your Maxtor Shared Storage and allow you to access all of the files that you desire. Of course, the download speed will be based on your home connections upload speed, so you can expect 40KB/s on a common Internet connection.

This is not all about just allowing yourself download the files, however. Another scenario is offering to give a friend some data, but not having an easy way of passing it along. Or, you may just want to allow the friend to download at his/her leisure. So, you can set up a special user account for the friend, complete with unique logon and password. You can lock that user to certain folders and even allow them to upload their own files – it works both ways.

From what I saw at the demonstration at CES… this is going to make some peoples lives easier. Once available, we will take the software for a spin and give our thoughts at that time.