Having long been the 800 pound gorilla in the PC peripheral market, chances are, you have owned a Logitech product either in the past or currently. Having pretty much cornered the “computer hardware not installed inside a PC case” market, only a few companies have even come close to competing against Logitech and survived to talk about it.

To date, we have reviewed a staggering 36 items from Logitech with little sign of stopping in the foreseeable future. Of all of these pieces, my personal favorite has been the v3 Squeezebox. I liked it so much in fact that I went out and purchased one for my own home and to date, it’s served me well.

Originally designed and developed by Slim Devices, the Squeezebox joined the rest of the Logitech portfolio when they acquired Slim Devices back in October of 2006. Having continued to develop and update the Slim Server software that drives the Squeezebox, the boys from Slim Devices have quietly been working on the next member of the Squeezebox family.

The Squeezebox Duet as it’s been appropriately named ditches previous designs and can truly be classified as an evolutionary product in the Logitech streaming audio lineup.
Named after its two piece design, the Duet is made up of a base station as well as a completely redesigned and feature packs remote. In the original Squeezeboxes, the entire kit was built into the base station, including a bright VFD display. 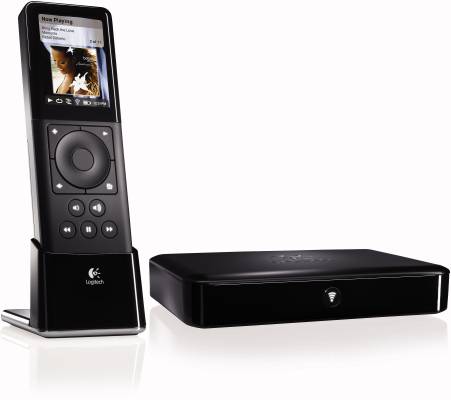 In the Duet however, the display itself is built into the remote and the base unit is nothing more than a featureless black box designed to sit in the background of your entertainment center. The background you say? Yes. With the older models, they incorporated an infrared remote that required line of sight with the base unit. With the Duet, the remote, or as Logitech calls it, the Squeezebox Controller, as well as the base unit operate over your existing 802.11g wireless network, eliminating the need for line of sight with the base.

Another nice feature of the remote is its incorporated headphone jack, allowing the user to walk around their home with a set of headphones on and listen to their music as long as they have connectivity to their wireless network if they decide to do so.

Jan 24, 2007 Addendum: During discussions at CES, we were told the headphone port would be functional, but Logitech has now clarified the issue:

“To clarify, the headphone jack is not enabled at this time. The Squeezebox Controller, like the rest of the Squeezebox family, has an open development model where the vast majority of the source code is made available to the public and third-party developers are encouraged to produce plug-ins, extras and applets for the platform. The Squeezebox Controller is actually a complete handheld computer and includes a number of hardware features that were added specifically for third-party developers. These include a headphone jack, an SD card slot, an IR emitter and a connector for external peripherals. We’re not sure what the development community has in store, but until they are enabled by third-party applications, none of these connections have any function.”

As we mentioned, the remote, or controller, is the center piece of the Squeezebox Duet. With its 2.4 inch color LCD screen and it’s iPod like scroll wheel, the Duet remote is truly a work of art and places full control of your digital music library in the palm of your hand. With the added functionality, gone is the need for a pair of AA batteries and in is a recharging station to rest the remote when not in use.

We do not intend to give any final judgment on the Duet at this time as a full review will be available as soon as we can get or grubby little hands on our own kit. Until then, and from our experience at CES, the Duet looks to be a clear cut winner. The Sonos and iPod influences are there but Logitech’s Slim Devices division has done what Logitech themselves have always done well… bring cutting edge technology to the masses with a stellar product at an affordable price. The Logitech duet has earned a Techgage Best of CES award hands down.

Covering the NETGEAR press conference two weeks ago proved far more interesting than it looked on paper. As a networking buff, I love virtually everything TCP/IP. Keeping that in mind, one of my favorite pieces of hardware to write about as of late has been network attached storage and when NETGEAR acquired Infrant earlier this year, we all wondered how it would affect Infrant stellar lineup of ReadyNAS devices.

As it turns out, NETGEAR announced a much needed product into the mainstream SOHO NAS market, a two drive NAS called the Duo. 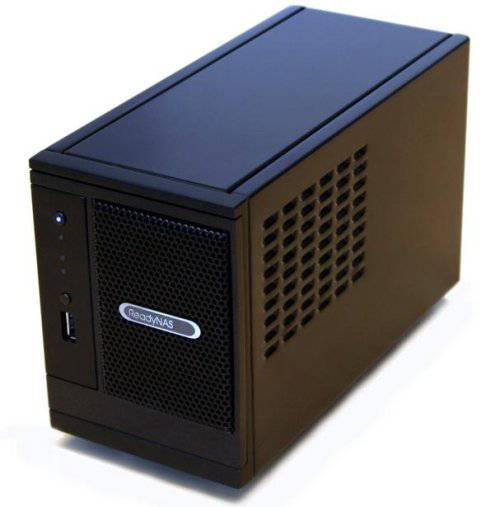 Keeping the popular X-RAID technology of previous models, the Duo can support up to two 1 TB SATA drives and connects to the network via a gigabit Ethernet port. One thing that stood out to us was the design of the unit itself. With both hot swappable drives accessible from the front of the NAS, the all black piece looked sharp and it’s well ventilated screen front certainly didn’t hurt things either.

While we don’t know the exact CPU used in the Duo, a 500 MHz Marvel (or something comparable) seems to be the obvious choice and by looking at the other hardware, it would only make sense to pair that CPU with the included 256 MB PC2700 DDR memory.

One of the best features of the Duo is the openness of the device. Supporting most popular media streaming protocols such as iTunes, Squeezecenter and UPnP AV, the Duo can not only safely backup your important data but also serve your media player as well. Supporting RAID 1 and 0, you can choose your type of RAID and get your digital media flowing through them tubes.

Available later this quarter, the NETGEAR Duo will start out at $499 and that gets you the Duo as well as a 500GB drive. All this combined to make the Duo the best NAS solution at CES 2008. Congrats NETGEAR on a solid looking NAS… we can’t wait to get our hands on one.