Prior to attending this year’s CES, we didn’t know exactly what to expect. There’s been a lot of doubt hovering around trade shows in general for a while now, and with the economy the way it is, people were beginning to wonder just how much of a success this particular event would be. Well, although we did notice a slight decline in attendance, it still turned out to be a great show, with countless products being announced and showed-off.

Being a “Consumer” show, we’d expect to see a lack of computer hardware announcements, but 2009’s show proved us wrong. NVIDIA announced new mobile GPUs, along with their GeForce GTX 285/295. They also unveiled their Ion system for everyone to see, and even gave gamers a new peripheral to play around with, the GeForce 3D Vision. Likewise, AMD also launched new mobile GPU parts, along with an Atom competitor, the Athlon Neo. These announcements were refreshing to see, especially since we don’t often cover gadgets and televisions.

Throughout the numerous press events that took place during the show, along with the various halls scattered among the Las Vegas Convention Center and the Sands Convention Center, we were able to select a handful of products and technologies that impressed us enough to earn themselves our “Best of CES 2009” award. We will be covering all of these here, so grab a fresh beverage, hide your wallet and prepare to sink your teeth into some of the coolest products exhibited at the show. 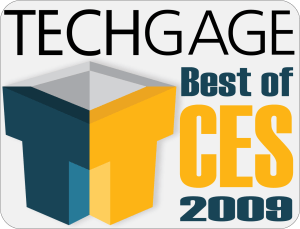 Like always, we should stress that given we don’t attend CES with a massive team like some of the larger outlets, we’re unable to see everything that the show has to offer, but we feel we have a good grasp on some of the best products showcased there. If you attended the show or stalked outlets that reported on things found there, and you have a product you think deserves to be awarded a “Best of” award, feel free to post about it in our related thread, and explain what makes it so great.

Without further ado, let’s get right to it! Please note that these are not in any particular order, and each choice was written by the person who chose it, either Greg or Rob. Who chose what can be seen on the final page.

One of the first booths we went to at the always-enjoyable CES press-only pre-show, CES Unveiled, was Boxee. Having used an old Xbox for many years now as a media center, I am very familiar with the XBMC project. The boys at Boxee have taken the best of XBMC and created a very social networking-conscious media center app that works under Linux, Mac and Windows. Written in C++ and distributed under the GNU general public license, Boxee is capable of playing just about any media format you can throw at it and can even decode high-definition video up to 1080p. 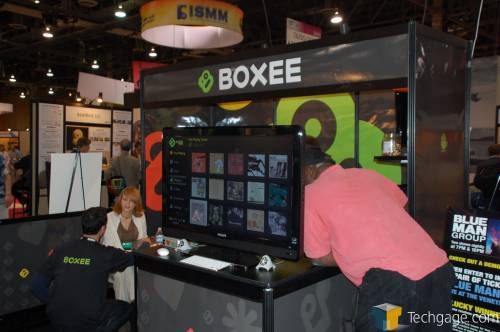 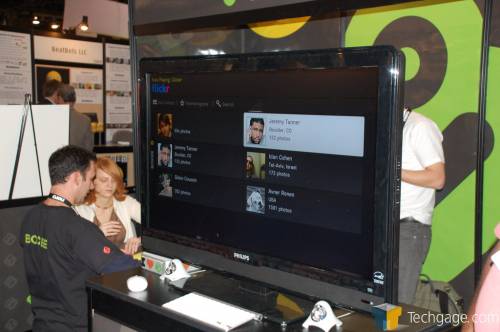 In our talks with the guys from Boxee, I could feel their excitement in the project and as I said earlier, as a fan of the XBMC project, it’s nice to see them take that software and improve upon it according to their vision for the project. Rob and I both left very impressed with the social networking aspect of the program and the insane support for just about every format known to man (sadly, DRM media cannot be played with Boxee).

With the software eventually being free to anyone interested in downloading it, I asked where their funding for the project comes from and how they plan to sustain the project once it launches (it’s currently in alpha status but available for download here). We were told that while the software is free to download (and from the looks of it, rather robust too!), there would be premium features that could be purchased as well as licensing fees to third parties that could use the app with their own set-top boxes With their goal being to have the software run on as many platforms as possible, look for more from Rob and I on the state of the application as I will be working with it under Windows, while Rob will be doing his thing with the software under Linux.

NVIDIA Ion – Desktop Computing is Smaller than Ever

We’ve heard plenty about this one well before CES began, and this past Monday, the embargo lifted on the details, and they are impressive. Before going into our meeting with NVIDIA, we pretty-much knew what to expect from our conversation. GeForce 3D Vision and Ion… our talking points were set.

When we got to NVIDIA’s booth, we were scurried to a meeting room where we were able to talk about their latest technologies away from their very-busy booth. Literally not much larger than a standard business card, the Ion platform uses the low-wattage Intel Atom processor and couples it with their own low-power GeForce 9400M. With a working model on hand, NVIDIA went to great lengths to show just how versatile the platform can be. The device included a pair of eSATA ports, multiple USB 2.0 ports, DVI, VGA, HDMI, 7.1 and optical audio, along with a notebook hard drive as the system’s main storage solution. While the base board that we were shown in the buff was small, NVIDIA was still able to cram all these features into a package literally less-than-double the size of the mouse being used to interact with the minuscule machine. 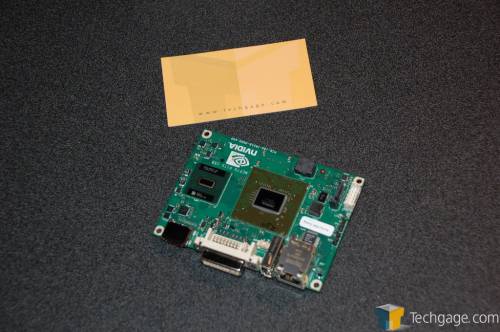 Hooked to a 1080p-capable monitor, the Ion was displaying 1080p content smoothly while a small netbook sat beside it; struggling with the exact same video, frame by slow frame. That said, and in all fairness, the comparison wasn’t exactly apples-to-apples. The netbook was using a single-core Atom, while the Ion was using the Dual-Core Atom 330. On top of that, the Ion was taking advantage of the GeForce GPU for playback, while on the netbook, it relied on Intel’s own GPU. PowerDVD utilizes NVIDIA’s GPUs a great deal better than any of the competition.

Adding to the differences was the fact that the Ion was running a 7200 RPM hard drive and the netbook used a slower 5400 RPM drive. One last discrepancy was with the memory. The Ion used a 2GB stick of DDR3 memory compared to the single GB or DDR2 RAM in the netbook. The memory issue isn’t as bad as the others simply because it’s out of NVIDIA’s hands considering the chipset that the netbook was running is incapable of using DDR3. With all that said, Rob and I were less concerned with how it compared to the netbook sitting in close proximity of the Ion, but rather the raw power of the platform using such little wattage. The fact that Ion includes a GeForce GPU, even a low-powered one, makes the deal that much sweeter. 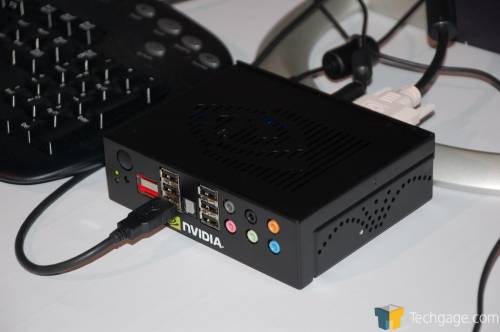 We are currently working on a write-up of the Ion, but based on what we saw, the power held in the platform is a superb start for NVIDIA. The Atom, paired with their GPU, is a potent little computer with almost limitless possibilities. Look for more info soon.