As mentioned in our introduction, AMD took advantage of CES to launch their new ultra-low-power mobile processor, the Athlon Neo. Currently, only one model is available, the MV-40, but more are undoubtedly en route. At 1.6GHz, this out-of-order CPU competes nicely with Intel’s own Atom N270, at least in raw specs. One of the first notebooks to take advantage of the new processor is HP’s DV2, a 12″ notebook that simply blew me away. Sadly, AMD was successful in tackling me to the ground before I could run away with it.

If you’ll recall my look at ASUS’ U6E 12″ notebook last year, you might remember that I pretty-well settled on the fact that 12″ for a notebook is the “perfect” size for on-the-go travelers. At that size, it’s neither too small, nor too large, and it still allows a full 1280×800 resolution – one that I wish netbooks would hurry up and adopt. The DV2 features all of this, so I had no choice but to pay closer attention. 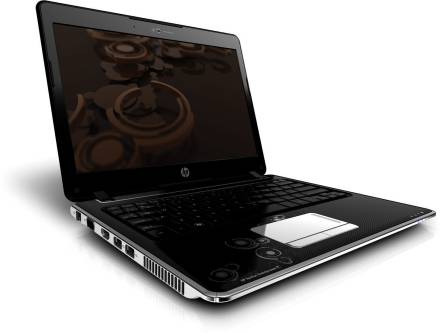 Let’s get right to the nitty-gritty. The DV2 is set to launch within the next few months and will retail for $699. Included will be AMD’s Athlon Neo MV-40, 1 or 2GB of RAM (expandable up to 4GB), an 8x DVD±RW drive, a 250GB hard drive (exact specs unknown), along with a wide-variety of wireless options.

What really sets this notebook apart is two things. First, it utilizes ATI’s HD 3410 discrete GPU, meaning that despite having a netbook-esque processor, simple 3D graphics will be no problem. Beyond that, HD content will play without issue, while leaving the CPU mostly alone, as you can see in the screenshot below. The GPU will likely draw more power than if the playback was dedicated to the CPU, but I’m uncertain if 1080p content would even be possible on this particular CPU alone. 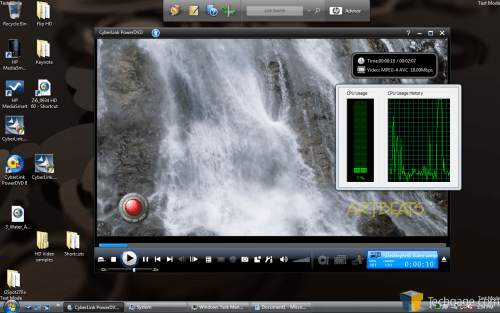 I should mention, while the video obviously wasn’t 1080p on this 12″ display, I saw the video in action being pushed through to an external display fully-capable of displaying such content, and it looked good. So what else? How about the external Blu-ray drive option that will be available for between $100 – $150? Or the fact that the DV2 includes VGA, HDMI, 3x USB, LAN, speakers, memory card connectivity? All that along with 4 hours of battery-life for only $700 (or ~$850 with Blu-ray)? Sign me up!

Psyko Gaming Headphones – 5.1 on a Pair of Cans that Sounds Good!

When I first received a press release for Psyko’s upcoming gaming headphones, I admit that I shrugged them off. Being someone who tends to enjoy high-end headphones more than a “gamer” model, I tend to shrug almost any gaming headset off, but I regret doing so to these. What makes Psyko different is that they’re different. Think that doesn’t make sense? Let me explain.

Take a look at any pair of 5.1 headphones on the market right now and you’ll see one thing in common. They’ll all have different driver layouts within the ear cup, positioned in such a way to emulate a 5.1 speaker setup. This usually requires more than 6 drivers (normally 8), but usually they do a pretty reasonable job of virtualizing surround sound. Psyko is thinking outside the box, though, and that’s what drew me to their booth. 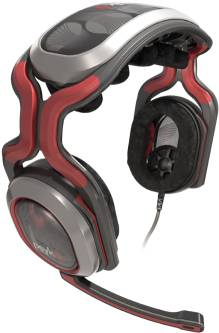 Gone are the drivers in the ear cups and here are the drivers in the headband. That alone is the reason why the top of the unit is so thick, and that alone. These drivers are all positioned in a very specific way to deliver realistic and accurate directional audio. Sadly, we weren’t able to test these out for ourselves at the show, due to the demo being inoperable while we were there, but a few of our friends had the chance to check them out, and they walked away very impressed.

Although it’s difficult to explain how they work, the sound essentially travels along certain “pipes”, all timed appropriately, to deliver accurate sound, and this will give what Psyko considers an unfair advantage to gamers. That’s been claimed before, so we’re definitely looking forward to receiving a pair in the months to come to see how it compares to the equally-priced competition ($299).