We tried hard to not award a single company more than one award, but it was impossible with NVIDIA this year. As you saw on the first page, their Ion platform revolutionizes what small computing is all about, and on the opposite end of the spectrum, their GeForce 3D Vision proves that 3D gaming isn’t just a fad… it hold some real value. For the uninformed, 3D Vision is a peripheral that, when using a proper display, will allow you to see games in a truer 3D.

Rory explained in-depth what 3D Vision is all about, so I won’t repeat his words here, but what the peripheral essentially does is layer two copies of the same frame over one another in such a way as to create a more realistic environment. We see things in 2D on our computer displays, so paired with this kit and a compatible monitor (120Hz or higher, or a DLP), we can experience more immersive gameplay. 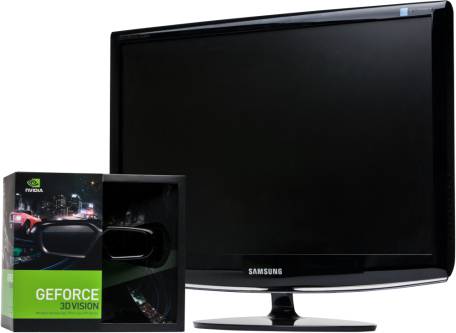 Ever since I first saw a “3D” gaming monitor at some event, I’ve pretty-much always been unimpressed. It might just be me, but I have never been impressed with these technologies, and most often, I’d rather just not use them at all. NVIDIA’s solution is somehow different, though, and it “works”. During a demo we were shown, I found that at first, I couldn’t really “get it”, but after a few minutes of playing, I began to become a little more immersed in the gameplay, finally realizing the potential here.

During a more robust demo, using a large projector, I began to see the potential even further. Although not all games were that impressive, I found two to be quite. Those were Mirror’s Edge and Tomb Raider. The former is a game that puts you in a first-person mode… you literally see through the eyes of the player, so it, in a sense, is a quite realistic game to begin with. But during one scene, the player jumped from one roof to another, and I actually “felt” something, as if I was the one doing the running and jumping. I didn’t feel that so much with Tomb Raider, but it definitely looked a lot more realistic than without the glasses.

As mentioned in our news earlier this week, we’ve had one of these kits in our labs for a few weeks now, and we are working hard to make time to tear it open and get to “work” on testing it out. You can be sure we’ll be posting an in-depth look in the coming weeks, so don’t miss it.

OLED Technology – Displays to Die For

Easily the coolest technology we saw at CES was anything that used OLED technology. Offering absolutely stunning picture quality, OLED is where the industry is heading. While we won’t be there in the immediate future, it was stated to us by someone in the OLED alliance that, when compared to the proliferation of the LCD television, OLEDs are somewhere around state of where LCDs where in 2003 – 2005. This means that while they are small, expensive and rare, they will rise in popularity when production costs come down to somewhere out of the stratosphere.

Showing off plenty of applications for OLED screens, we saw a small alarm clock device with what I am guessing was a 7″ screen and plenty of other small television applications. Also impressive was the bendable/foldable screen being shown off. Displayed was a prototype that the military apparently has great interest in. The device appeared to be a gauntlet-type apparatus with a large widescreen OLED embedded into its casing. This would be great for mapping and tactical information in the battle field. Please, get these to our soldiers FAST! 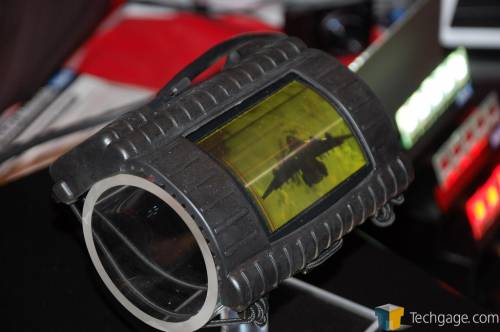 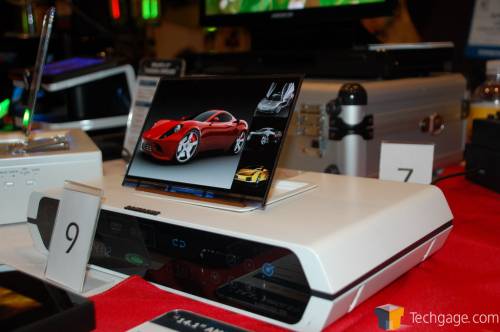 If bendable screens are your thing, how do you feel about the idea of folding them up? We were able to play around with a prototype cell phone that folded out into a great looking AMOLED screen. This thing was/is nuts and something that I am personally looking forward to. The day when this technology saturates our everyday devices will be an awesome day for humanity. Or something like that.

At the end of CES, we both left brimming with optimism. While the economy is a valid concern for almost everybody, and at the show there were signs of its impact, for the most part it was just a buzz word used to start up a conversation. We are confident that these companies will, for the most part, conduct themselves within their means, and while that might mean a lower amount of monies for their engineers, their innovations will continue to set the market on fire.

Perhaps innovation will be boosted by smaller budgets… who knows? What we do know is that while CES 2009 was an overall good time, there were a few products that stood head and shoulders above the rest. Greg gave five of his favorites, and Rob, five of his. One thing’s for certain – 2009 should be an interesting year.