At the beginning of each year, Las Vegas vacationers are taken by surprise when 100,000 or so geeks infest the casino-laden city. And as Techgage staffers are suckers for bodily punishment, we of course headed on down to see all of what’s in store for 2011 where consumer electronics, computer hardware and other technologies are concerned.

Like others in recent years, CES 2011 had a major focus on mobile hardware, with touchscreens, docks, tablets and phones hogging most of the limelight. It was for great reason though, as some of the products we saw were rather surprising in different ways.

Admittedly, we were at times overwhelmed with the onslaught of mobile products, but we didn’t forget about PC hardware, and in all, about half of our “Best of” list is dedicated to either side of the spectrum. All of the products chosen for our Best of award has been discussed among the staff and well-deserves its spot here. Note that these products are listed in alphabetical order.

At CES 2011, tablets, notebooks and touchscreens were major topics, and Acer managed to pair all three of these things together to create the ICONIA. It looks like a regular notebook at first, but it’s in fact a dual-screen “touchbook”. There is no physical keyboard, but rather two touchscreens of equal size, and from initial impressions, the possibilities are endless.

The ICONIA can be used like a regular tablet, or even a notebook thanks to a virtual keyboard, but there’s a lot more that can be done than just what’s obvious. The video from both screens can run into each other, for example, meaning that when viewing a webpage, it can span both the top and bottom. In the example of social networking, Facebook could be displayed on the top screen, and other social networks on the bottom screen, using either a Web browser or special apps.

Primary control of the touchbook is handled with the “Acer Ring” application that will allow you to use your fingers to access special apps among other things, such as the keyboard. For the sake of becoming more efficient at using the ICONIA, you’ll be able to create your own gestures to both launch applications or take care of simple tasks.

Without question, the ICONIA is one of the most interesting products to come out of CES, and though it’s ease-of-use and fun-factor is yet to be seen, it has major potential to be one of the coolest products to see a release in 2011.

Tablets were all the rage at this year’s CES, but ASUS spun things a bit differently with its Eee Slate EP121. Unlike most tablets which focus on delivering just enough software to keep people mobile, the Eee Slate packs in more power and functionality so that you can get a lot of actual work done while on the go.

For starters, the ASUS Eee Slate EP121 uses an Intel Core i5 dual-core processor, which is a major step up from the ARM or Intel Atom processors that other tablets have been equipped with. In addition, it features a 12.1-inch LED-backlit display with a large 1280×800 resolution, along with a 178° viewing angle. As a capacitive device, both your fingers and a special stylus can be used for control. 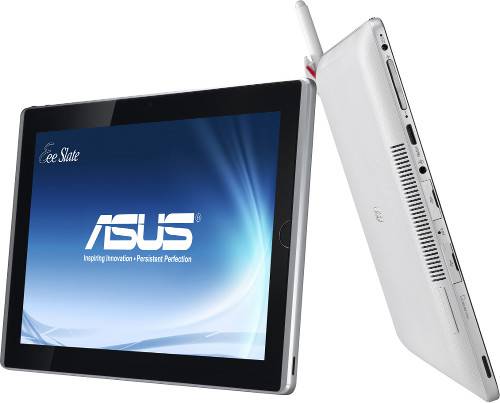 While most tablets available use a non-Windows OS, ASUS includes Windows 7 Home Premium on the Eee Slate, meaning that regular computing can be done in addition to mobile computing. Capture a photo on your digital camera? Pop the memory card into the Eee Slate and edit it in Adobe Photoshop with the stylus! In the end, all we know is… we want one.

As far as monitors go, ASUS might not be the best-known company, but that is quickly changing. The company provides solutions for almost all price-ranges, and models like the PA246Q prove it’s serious about delivering the goods for any type of user – including the “professional”.

That’s what the “P” in PA246Q stands for, and as a professional monitor, this one boasts some rather impressive specs. First, it uses a P-IPS panel, which as a requirement needs to offer the best-possible color gamut and bit-depth; in this case being 1.07 billion colors and 30-bit depth. Given the panel it uses, the PA246Q delivers 98% AdobeRGB and 100% sRGB color spaces – perfect for photographers and designers alike. 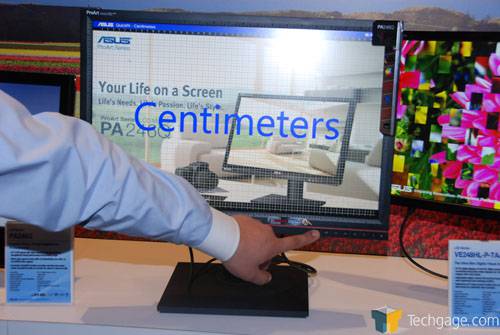 Along with those specs, the PA246Q includes a resolution of 1920×1200, has a brightness of 400 cd/m2, a 6ms GtG response time and a viewing angle of 178°. For connections, there is an HDMI, DisplayPort and DVI available, and given a professional monitor would be incomplete without a card reader, there is one of those as well.

One of the coolest features of the PA246Q is the overlay mode, where the user can choose which metric to overlay on top of their video in order to gauge the size of something. The image above shows centimetres, but another example is legal 5×7. You’d essentially overlay that value then scale your document to fit inside it. It’s a niche feature, but still quite cool. The PA246Q will be priced at around ~$550 when it’s released in the months ahead.