Sometimes it feels like we’re reaching the upper-limit of what features can be added to our motherboards, but companies like GIGABYTE continually prove that the sky’s the limit. Its G1 series of motherboards reaffirm that, as both its feature-set and overall aesthetic appeal is top-rate.

Catered to gamers, the G1 comes in three flavors, two of which we’ve awarded the “Best of” award. On the surface, the color scheme is simply awesome, featuring a black PCB with black/green components – perfect for the marine. The heatsinks around the CPU socket and PWM area are shaped like a gun barrel and handle, while the faux southbridge has a bullet magazine sitting atop it. 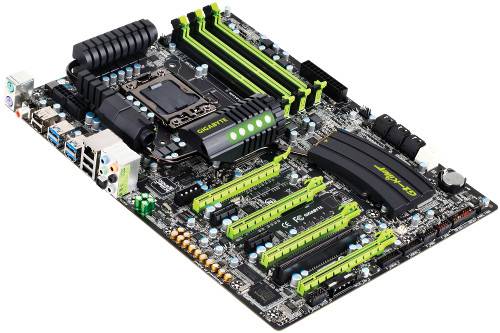 Being that the G1 series is designed for gamers, the boards are able to handle three GPUs without an issue, and in the case of the Assassin, four should be possible. On most motherboards, using three or four GPUs is difficult due to discrete network and audio cards that might be wanted, but GIGABYTE gets around this problem by including a Killer Networks E2100 network chip and Creative X-Fi audio chip right on the motherboard, freeing up all of the PCI slots for gamers.

A couple of weeks ago, Lucid sent out a press release that announced its support for Intel’s Sandy Bridge microarchitecture, but it wasn’t until CES and a meeting with Intel until the relationship between the two made sense. In essence, Lucid’s “GPU virtualization” is meant to allow both the discrete and internal graphics card to work at the same time – meaning you could game on one while encoding on the other.

In the example Intel gave in a private meeting, the company had an H67 machine setup, using an Intel DH67BH motherboard, Intel Core i5-2500K processor and NVIDIA GeForce GTX 480 graphics card, and gave an example of how someone could be gaming on the discrete card while encoding video on the other. As the photo below shows, Unigine’s Heaven DirectX 11 benchmark was running on the GeForce GTX 480, while CyberLink’s MediaEspresso was encoding video on the Sandy Bridge IGP. 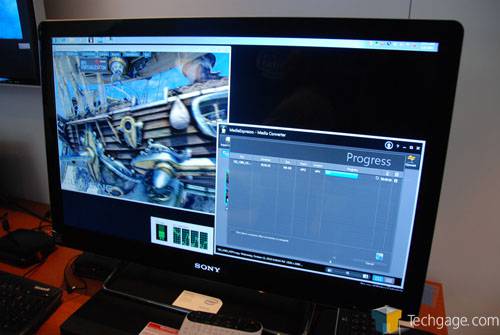 Although the demo ran like a dream, the technology is still in the earliest of states. We were told that we should be seeing some good progress in the months to come, and we expect to get our hands on it to test it in-house in the near-future. It’s important to note that this technology is not one that requires a piece of hardware, but rather software. Lucid will likely license the driver to whichever motherboard vendors want it, and will limit its use with the help of EFI hand-shaking.

Here’s a product that surprised us, because it seems simple in theory, but proves exceptionally useful in the real-world. The MobiSX (Mobility Share-ability Expandability) is an external storage drive using NAND flash that acts as external storage via a wireless (WiFi) connection.

At first, the MobiSX (this is the codename; the final product might be named something else) will be sold as an Apple iPad storage enhancer, as users there seem to be perfect for a product like this. After connecting to the wireless network created by the MobiSX, users can open up the Apple Safari Web browser and type in its IP address. At that point, a menu would be brought up allowing the user to browse all of the content stored on the drive. 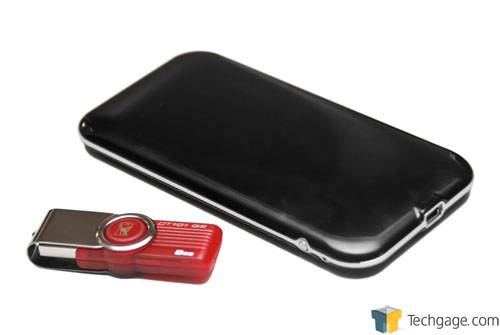 Because the iPad doesn’t allow for expandable storage, a wireless solution is the only way. What makes the MobiSX so attractive is that the most popular iPad model is 16GB, and for around $100, users could purchase Kingston’s device and expand their storage by another 16GB. In use, the MobiSX should last for about 4 hours, and it can be recharged by plugging it into a USB port on a PC or Mac.

In the future, MobiSX will likely see the launch of other models that aren’t iPad-specific, and we might also see larger models as well (a 32GB is also planned). Thanks to its price, ease-of-use and ability to add storage to devices that don’t offer a USB port, the MobiSX is simply a brilliant product.