Even though the card comes “Pre-Overclocked”, it shouldn’t be finalized. As already mentioned, the Core being bumped 20MHz is hardly anything to brag about. I found a completely stable overclock to be 410/1100, which is a 40MHz increase to the Core, and 100MHz increase to the Memory.

I fully believe that this card can even be overclocked further, but I have had bad temperatures with this card, which obviously will hold back the overclocks. When I say bad temperatures, it’s not an exaggeration. I will tell you the experiences I have gone through.

While trying to benchmark for this review, I had the problem of the computer shutting right down for no apparent reason. First the video would go, then the audio, then the whole PC would lock up. Originally, I thought this was my memory, but it was definitely the card. After doing many tests, and allowing RivaTuner to keep track of temperatures, I found that during my Far Cry tests, the Core was hitting an unreal 100ÂºC! 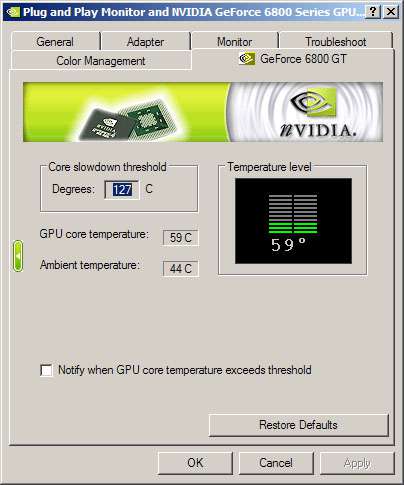 The temperature above, is the lowest I have ever managed to get. E-mailing BFG, explaining the situation, I got this reply:

Seeing temperatures that high, especially if your ambient is also high is genreally indicative of there being an issue with the cooling on the card not working conrrectly. Unfortunately there is no easy way to deal with this problem short of us swapping the card, as trying to resolve it on your end will void the lifetime warrantee. For all warranty options please contact us at 1-866-234-3499. We are open 24 hours, 7 days a week.

At least they are ready to fulfill the guarantee and swap the card. It also verifies that it was the card, and not just the ambient room temp. Considering that the Case temp was 35ÂºC, and the GPU was hitting 100ÂºC, it’s obvious where the problem was. 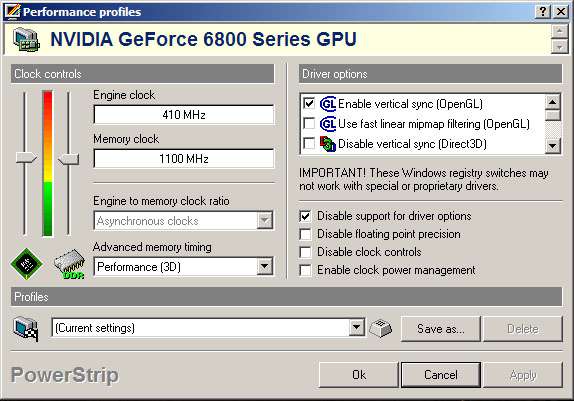 In order to combat the temperature for now though, I mounted a fan underneath the card, which is blowing air straight at the cooler, but not getting in the way of the cards cooler that is blowing air away. I also took the door off my case, which also helped. Now, instead of the card peaking at 100ÂºC, pushing it as hard as I can, it now hits 89ÂºC, which is still way too high.