Are you craving a racing game but can’t ignore your innate desire to just blow things up? If so, Bizarre Creations’ Blur might be just what you’re looking for. It brings two awesome things, destruction and speed, and results in a title that’s full of eye candy, a good online mode, and a difficulty level that’s sure to challenge even the most hardcore racer.

Quality racing titles don’t come along all too often for PC gamers. Some may disagree, but aside from a Need for Speed title that shows up each fall like clockwork, there’s rarely an occasion where a new racing title grabs me by my shirt and forces me to take a break from other games. I even recently settled on the fact that I might have to wait until the fall to see what becomes available at that time… *sigh*, on consoles.

Then I spotted Blur. A Bizarre Creations, uhh, creation, Blur right from the get go has huge potential. After all, Bizarre Creations is responsible for the Project Gotham Racing series – not to mention the super-fun Metropolis Street Racer which was available for the Sega Dreamcast.

Blur isn’t quite like either of those, but Bizarre Creations couldn’t deliver a flop, could it? Nah… we’d hope not.

Unlike those aforementioned titles, though, Blur isn’t just about racing. It’s about racing, and kicking ass. On wheels of course. At the very first race, I couldn’t help but think of Need for Speed (Most Wanted in particular) and Twisted Metal, but given this article’s title, you probably already guessed that. Blur’s racing elements remind me of Need for Speed, while the destruction naturally reminds me of Twisted Metal.

Common of many “underground” racers, and Need for Speed: Most Wanted (and Underground) in particular, is to see the player prove his or her worth by racing against the big boys. Blur is no different. The game is split into nine different tiers, or sets of races, each which concludes with a one-on-one race with the so-called boss. As the story goes, you’re the lowly racer and these bosses demand respect. Your goal is to prove that you’re better, and win their car. 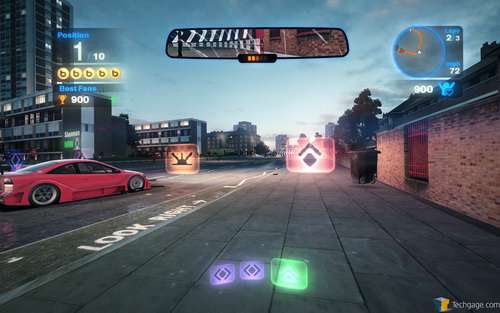 The metric used to progress through the game comes in the form of “Lights” which you earn by completing races and their respective goals. Collecting these will allow you to progress through to later races and tiers, as you’d expect. Each race or event you enter awards you one light for placing third, three for second and five for first. In addition, there are two bonus lights that can be acquired in any given race, for a total of seven.

The first of these bonus lights is awarded when you reach your “Fan Target”. You see, as you race through any event at all, you earn “Fans” by doing cool things, such as successfully landing a weapon shot, blowing them up, doing a mega drift, dominating a race, successfully completing fan demands and much more. Since you never actually see these fans in their real numbers, Fan Points is nothing more than a number. The developer could have called them Blur Points and accomplished the same thing.

The last of these lights is for what’s called a “Fan Run”. In every single race, there’s an icon somewhere on the track that will spawn 12 gates ahead of you. Your goal is to go through each one successively through to the 12th one. If successful, you get a “Fan Bonus” (which scales depending on how fast you complete it), and likewise earn the last light for that race or event. 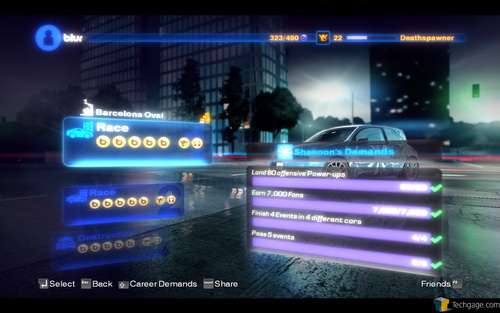 Blur, as you might have guessed already, is not that original of a game. The fact that I immediately thought of two other games pretty much proves that. It doesn’t entirely matter, though, because the lack of any originality doesn’t seem to hurt the game any. As long as you enjoy racing at break-neck speeds and kicking some ass, originality just might not matter.

Admittedly, though, there are times when the lack of originality does seem to shine through more than others. In particular, I found the power-ups and weapons, which can be picked up along the track by running through its icon, a bit bland. In total, there are five different weapons at your perusal, and three beneficial power-ups. The latter include a shield, a repair and also a speed boost. Nothing original here.

Of the five weapons, the Shunt missile is the most sought-after, as it’s capable of heat-seeking. Not all too different is the Mine, which can be shot ahead and remain on the track for some time. Then there’s the weapon that requires ultimate in precision… the Bolt. Like a gun, three shots with no aiming assistence whatsoever is what comes between you and slowing down your opponent. All three of these weapons have the added benefit of being able to be shot from the back of your car, which becomes incredibly useful if someone is tailing you. 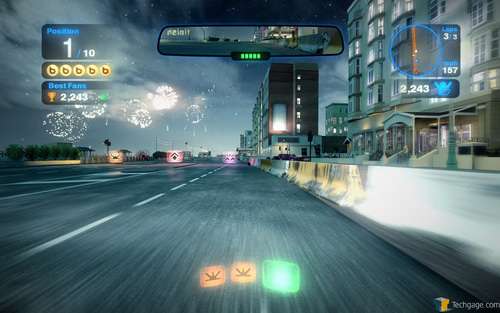 The last two weapons are a little more original than the others, but they’re still not all that innovative. One is Barge, which when used will emit an energy burst around your entire car. In order for this to prove useful, there must be at least one car close enough to you, as the effect’s radius is somewhat limited. When hit by the Barge, the enemy will take a bit of damage and also slow down considerably for a moment.

To help round things out, there’s the Shock, a weapon that shoots three energy balls from the sky straight to the track about five-hundred feet ahead of you, resulting in lingering fields of elecricity for about fifteen seconds. These don’t damage your opponents as much as slow them down, but if used effectively, using the Shock can sometimes decide the fate of your race.

I might be harping on the lack of originality here, but to be honest, I don’t have a real beef with the weapons or power-ups here, because Bizarre Creations did tackle all of the basics. Still, I couldn’t help but feel like I yearned for just a bit more, and I really don’t think it would have been too difficult to pull off. 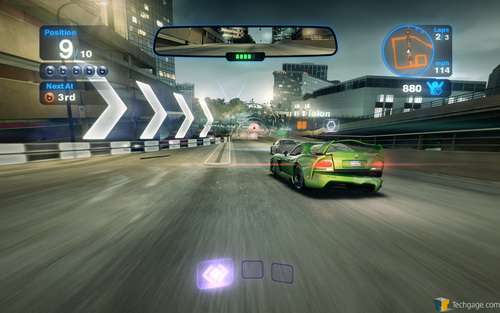 How about a weapon that does nothing but disorientate your opponents for a second or two? Or a power-up that not only gives your car an extreme shot of extra speed, but controls your car for you until it wears off? Or a gun that shoots a Mine-like “bullet” from the front, left, right and back side of your car, all at once? Alright, sure… these are not original ideas either, but at least they would have added a bit more flavor to the game.

Another idea that sprung to mind came courtesy of another game, though I can’t remember which (I just remember the mechanic). In it, power-ups you collected could be stacked to become more powerful. As an example, picture picking up a Shunt, and then another, to have the weapon increase in power. Or if picked up three times, it could have 2.0x the power compared to if you just picked up one. Other power-ups would stack similarly, such as the speed boost (300 MPH, anyone?).