It goes without saying that Intel’s dual-socket Extreme desktop platform is in every way, a beast. But as we’ve proved, the QX9775 processors are not your lone choice. Our budget processors filled the gap just fine – a huge relief to enthusiasts on a relative budget. Obviously, we do not see the extreme performance with our E5410s as we did with our dual QX9775s, but that was to be expected.

Consider that the D5400XS board retails for $649 alone (if that’s the final price at retail) and the dual QX9775s sell for a bit more than $3,000. That’s an expensive base. For less than that, we built a full-featured machine that’s ready to tear through your tasks and allow you to enjoy high-end gaming, listen to music in great clarity and keep your room warm in the winter. Not a bad way to spend $3,000… at all.

Although I labeled this article with “budget” in the title, the truth is, there’s not too much “budget” about the configurations we chose. Most people can build a gaming machine for $1,500, so what did we get for our extra $1,000? Four additional cores, for the most part. But was it worth it? Of course it can be, but that, like most things, has to be decided by you.

The fact that we had to choose an expensive power supply and use the D5400XS motherboard didn’t help things, since those components together took care of $1,049 of the total price. So our “budget” moniker wasn’t entirely representative of what we could accomplish in the end. But even so, given what we built, I consider all the prices quoted to be reasonable. 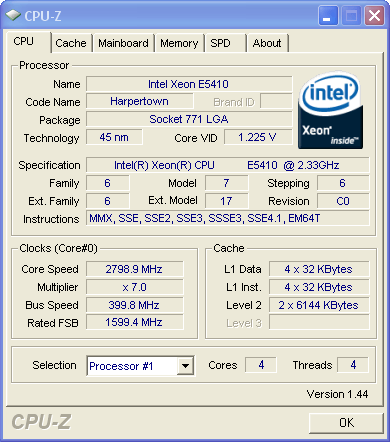 Cutting corners could give us an even lower price, but in my opinion, it’s just not worth it. If spending $2,500 on a PC you plan to enjoy for a few years, there’s no sense of cutting back anywhere if it means you are going to build a machine you are not entirely happy with. In the end, adding another $500 is not going to be that big of a deal for most people, while it will make a nice difference in the overall system.

I should also mention that a third party motherboard is en route, courtesy of ASUS. Called the Z7S WS, the board is designed for the enthusiast, like the D5400XS – the downside being the lack of NVIDIA SLI support. That might be fine for most people, however. Estimated price for that board upon release will be around $519, or $130 below the Intel offering. The estimated street date is somewhere towards the end of Q1. I imagine we will see it before mid-March, however.

In the end, it’s hard to deny the sheer power of what the platform offers. If you run any application on a regular basis that can handle more than four cores, you are sure to notice the lightning fast speeds during use. People who would notice it most include 3D modelers and animators, video producers, photographers, audiophiles… and even the soccer mom who likes to create slide-shows. The power is there. It’s just up to you to tap into it.

While the system we built may not be the fastest on the block, it’s hard to discredit what our $600 8-Cores delivered. On top of that, our nice overclock was possible while using air and stock voltages… so there is no risk in pumping up the frequency.

It’s a great time to build a new machine, and if you want eight-cores, it’s nice to know the option is there. And considering what $3,000 can get you, it might be hard to look away.

I’ll wrap things up with a pros and cons list of our budget build.

If you have a comment you wish to make on the article, feel free to head on into our forums! There is no need to register in order to reply to such threads.