There are countless new products to inform you about, but here are our first ten. For our part 1, we will taking a look at products from Seagate, Zalman, Gateway, OCZ, Zalman and more.

Techgage has been spending a lot of time at CES and have come across a lot of interesting technologies and products. Sadly, thanks to our incredibly slow (and sometimes non-existent) hotel internet, we’ve been unable to publish any content thus far. So, you can expect the majority of content from us after CES is over with, when we can reflect on what we saw at the show.

However, we do want to share some interesting things we have found so far, so that’s what I will concentrate on in this article. Please note this is the first part to a few part series of articles. Without further ado, let’s take a look at a few cool new products.

Seagate cares a lot about the digital lifestyle, but it’s no surprise since that’s what people are in to. With that in mind they are launching a new series of enclosures that are quite a bit different than anything else out there. They essentially have larger syncing capabilities than other enclosures on the market, which we will get into in far more detail with our future review. One thing that sets the enclosure apart however, is that instead of the light flickering to show you the read/write activity, it pulses instead. This results in a much more “soothing” experience. 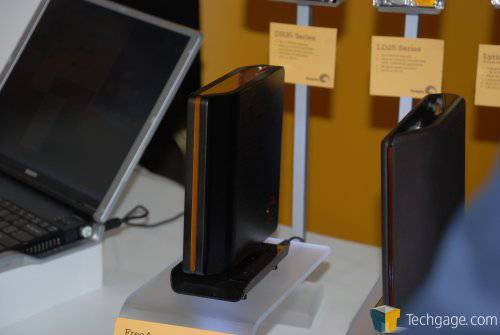 LG has proven to be one of my favorite tech companies thanks to the fact that I own many of their products and have never had an outstanding problem with any of them. I was pleased to see at CES that they had their dual HD-DVD/Blu-Ray drive on display. This is a drive that should easily solve the problems that are clearly evident in the war that’s been going on.

What adds to the value is that the drive is also a Blu-Ray writer, which is great in case you have 50GB worth of data to back up. There was also a standalone player on display, for use with your television. So, this technology is clearly not just singled out for computer use. 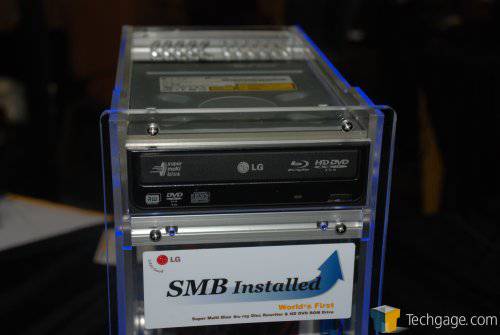 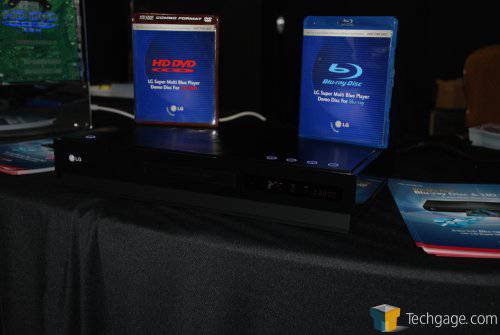 One line of products that both Greg and I got excited over was what Gateway had on display. We will get into their other products in the near future, but what stood out to us was their gorgeous 24″ FPD2485W. The picture quality is some of the best we’ve seen and the feature set makes it a great value. It has a PIP feature that works extremely well and looks great. With PIP enabled, the alternate picture in the corner is still very clear.

Another feature that’s welcomed is that all of the buttons are hidden, so you just press the certain logos on the monitor instead of actual hard buttons. I currently run an ASUS monitor that has this same feature but they are incredibly difficult to use. Gateways implementation was perfect, completely responsive. The best part about this monitor is that it’s $30 cheaper than the nearest competition… and is a good deal better. 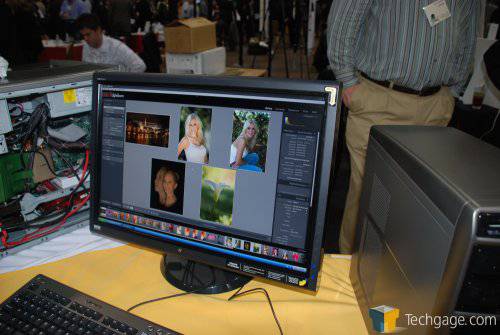