Logisys was another company that stuck to showcasing their already successful items, but they did have an upgraded media-panel on display. This panel can handle dual USB ports, dual Audio jacks, S-ATA, media cards, firewire and your fan speeds. There is a new LCD screen that keeps you informed on the status of the fans, including the temps of course. 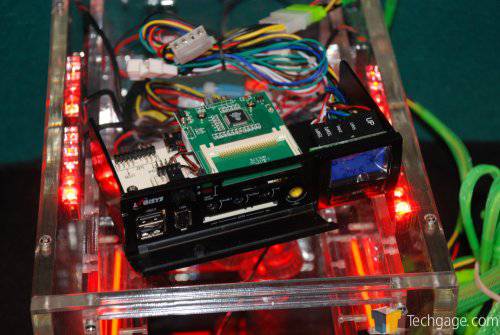 Thermaltake is well known for their cases. I have their Armor LCS and it’s been treating me well. Though, nothing compares to a case like this. I don’t recall the name, however it’s going to be in very limited production with between 500 – 1000 manufactured. What helps the case stand apart would be the hydraulics which open the case at the top and the sides. It’s unique to say the least. 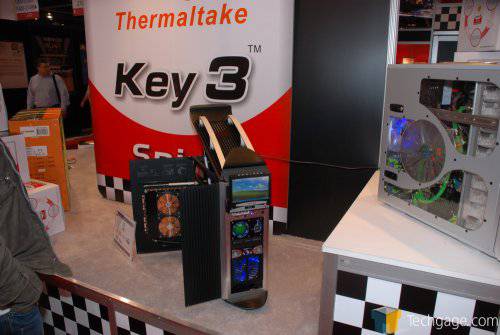 I believe we were quoted the case as retailing for around $399, but they did not finalize what extras would be included. If the final version includes the water cooling, LCD and panels, you can expect that price to rise. Regardless, this is one of the nicest cases found at the show.

If the Thermaltake doesn’t do anything for you, then how about this custom painted TJ07-W? I don’t remember who did the paint job, but I did know one thing. I couldn’t get away with stealing it. 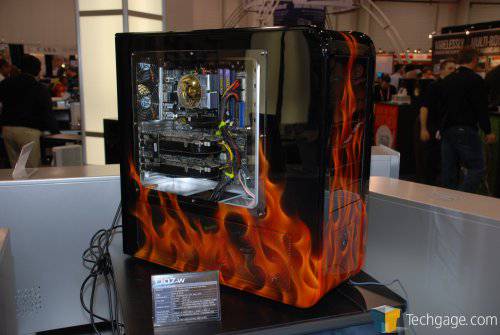 With gaming becoming more realistic, it only makes sense to put your actual body in the middle of the action. Canadian company D-Box had this chair model on display, but have no ETA of final release. They currently mass produce similar chairs for the movie audience, but this is their first foray into the gaming market.

The game that was being run was an open source title which had specific code to tell the chair how to react. The exact same thing is done for movies. The D-Box rep shrugged when he told us that with movies, each and every frame is analyzed to make sure the chair is reacting as is should. 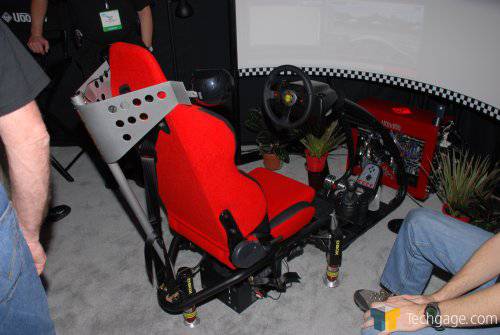 As you can see though, this was a setup that received a lot of attention. It’s hard to say how soon we will see this hit the market, but hopefully sooner and not later.