Skullycandy is a rapidly growing player in the headphones market. Their main selling point is the fact that they design their product for the people who are buying them. This is evident from the photo… there are even Jamaican themed ones. Some of the models include a pouch on the top, to store whatever it is you want, whether it be change or something less than legal, as we were told. 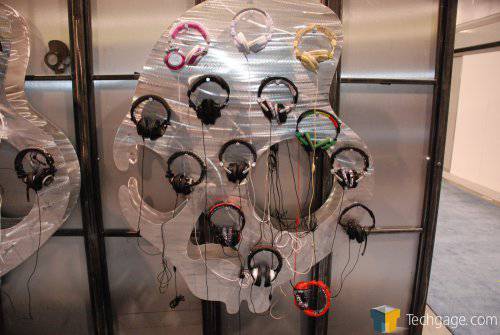 IBM is well known for new technologies but seem to have lost some limelight in recent years. They had a lot on display though, including their Cell CPU, gaming related tech and this MASTOR notebook. It’s not really the notebook that’s the selling feature but the software running. In gist, it’s advanced translation software used for speaking to someone that speaks a different language. IBM informed us that this technology is already being used by the US Army overseas. 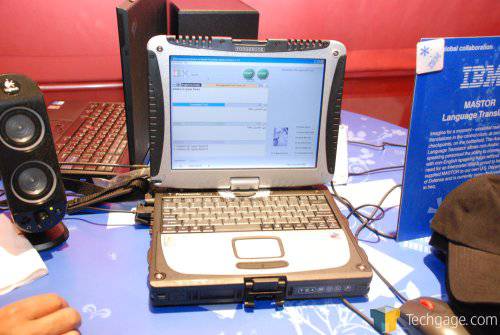 Basically, you choose your start and finish language and then speak into the microphone. As you speak you will see the text and wav file appear on the screen. Once you are finished, you push the Start button and it will both translate the English (or your native language) into the requested language in both text and voice. It even includes two different versions of the input and output, in case one is better than the other. As is common with most voice recognition software this one was not spot on, however it’s uses are obvious.

High definition was a huge part of this years CES and was evident with the huge selections of TVs to oogle over. None grabbed my attention like the LG 71" Plasma 71PY1M, however. I am a big LCD TV buff myself and have always considered them to have better overall quality over Plasmas in both brightness and crispness of the picture. This TV proved me wrong though. It was the absolute clearest screen I have laid my eyes on. The image quality was clear and the text was as crisp as I had hoped, with no visible bleeding around the edges, even on the white fonts. 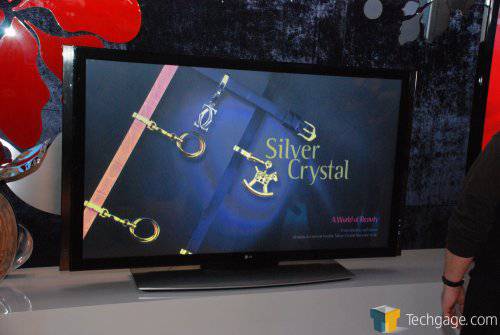 Once in a while, I am impressed by a product that I would never expect. In this case, it’s a Logitech Webcam. The QuickCam UltraVision to be exact. The webcam includes 5 high-quality lens elements for superb image clarity. It’s also designed to function with all of the popular IM software available today. One thing that stood out was the fact that you can change your avatar on a dime. Included are many different avatars which will replace your face while talking to someone. This could include scary or funny characters. It doesn’t matter what IM client you are using… you will be seen as your avatar because this feature runs right through the driver. 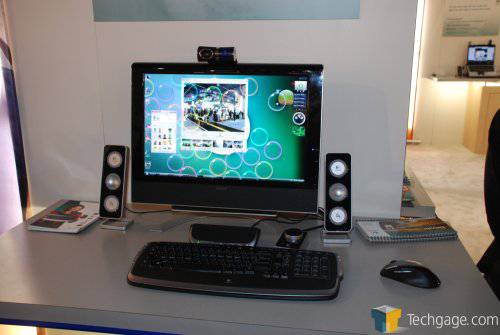 I was impressed by the accuracy though. The camera detected the face immediately and then wherever the person moved, the avatar was in the correct alignment and looked rather natural despite the fact that our Logitech rep looked like a true witch. We will be receiving one of these for review shortly, so I will get more in-depth at that time.

This is the bulk of the items we found of interest at CES. I’ve been hearing a lot of comments from others that this CES didn’t do much to impress them, and I may have to agree. Within these two parts were the products that Greg and I were really impressed with or intrigued by. There are others, but they are in the works for more in-depth articles. I hope that you enjoyed our quick run-through and stay tuned for even more CES related content on the way.