We caught up with DeviceVM at CES to see what’s new with their Splashtop embedded Linux environment, which we first saw on the ASUS P5E3 Deluxe motherboard. As we found out, development has been steady with many new features implemented and ready for deployment with notebooks.

When ASUS rolled out their X38-based P5E3 Deluxe motherboard, it delivered a first: DeviceVM’s Splashtop. If you read our review of that motherboard, you are probably already aware of what Splashtop is and how it works, but if not, we will cover it here.

Splashtop is an embedded version of Linux that can be contained on a flash-based chip somewhere on the motherboard or on a special partition on your hard-drive. What’s special about the embedded environment is that it can be accessed within 10-seconds of turning on the machine. In addition, since most of the computer hardware is not being used to the fullest extent, such as the hard-drive, power consumption is improved. The OS is also tuned for those who don’t understand Linux at all, so the environment is for everyone.

The version of Splashtop on the P5E3 Deluxe (and now P5E3 Premium, M3N-HT Deluxe/Mempipe, M3N-HT Deluxe/HDMI and M3N-H/HMDI) is quite limited, however. It was mainly there as a tech-demo and included the ability to use Skype and surf the internet. At CES 2008, the folks at DeviceVM had an ASUS F8 laptop on display that showed off the latest version. Bear in mind that this is unreleased software, but should be available in the coming months, if we are lucky.

As you might notice in the photo below, this version of Splashtop is far more robust than what was seen on the P5E3 board. The first new option to catch my eye was DVD. As you’d expect, you are able to play a DVD movie without booting into Windows or Linux. All the required codecs are pre-installed so that you could do this seconds after turning on the notebook for the first time. 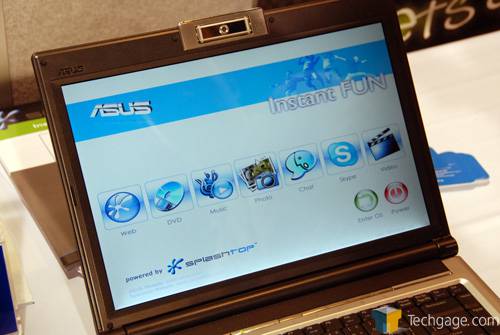 In addition to DVD, Music, Photo and Video are other features that could be appreciated by many. On boot, Splashtop automatically mounts an NTFS or FAT partition on the hard drive, making it accessible to you from within any of those applications.

Scenarios that come to mind include being on the road and wanting to listen to music but don’t have an MP3 player handy. You could listen to music this way, while using less power than what Windows would require. Or, you might be sitting beside a friend in a conference and could boot up the notebook and show her/him photos within 20 seconds. The same applies for video.

As mentioned earlier, Splashtop can be installed on a secret hard drive partition or flash chip on the motherboard. I am hoping to see that the flash chip method would be the most popular choice for two reasons. First, it would be nice to have a dedicated 1GB chip for certain things within the environment, and second, less power would be used when compared to a hard drive power consumption.

Our own Greg King had a great idea with regards to adding a notepad of sorts to the OS. Imagine being on the road and recalling something that you needed to write down, but you had no paper. Instead, it would be just as easy to boot into Splashtop within seconds and type the note out there, and shut the machine back down. For notebooks specifically, this idea would work well and I hope to see DeviceVM consider it for a future revision. If the flash chip was FAT32 formatted, then this would mean that the notes could even be accessible once back in Windows.

Also verified to us is the fact that Splashtop is fully upgradeable via normal firmware methods, although no new version for the P5E3 Deluxe has been released since that boards launch. If the technology takes off in notebooks, updates should be more regular.

When questioned regarding writing to the hard drive from within Splashtop, we were told that due to NTFS being dangerous for use under the environment (despite NTFS-3G actually being pretty safe), writing is not going to be possible right now. FAT32 would be a different story, however, since Linux can read and write to it without any potential issues. Adding that functionality would make sense, as it would allow you to download files from the internet and save them directly to your thumb drive or external storage. Though the goal is to keep Splashtop small, adding write functionality to a FAT drive would no-doubt improve usage.

Splashtop is a simple idea, but utilizes innovative implementation. After what I saw at CES, I am looking forward to the first release on notebooks and will give an updated outlook at that time. Mark Lee, CEO of DeviceVM notes, “Splashtop is changing the way people use their computers… By the end of 2008, we expect most consumers to not only be asking for this technology on motherboards, desktops and laptops, but expecting it.”

How that plays out is yet to be seen. It’s certainly ambitious, but after talking to DeviceVM, I can see they are also ambitious. Splashtop is on the right track and I can’t disagree with their path so far. With the help of ASUS, usage will improve and it may very well become a regular stature within the next few years.