by Rob Williams on January 7, 2008 in Processors, Trade Shows

Intel has just announced sixteen new 45nm-based CPU offerings, but the desktop Quad-Cores will have to wait for actual launch until “sometime” in Q1. Available this month are both the desktop and mobile Dual-Core units. Pricing and specs inside.

Intel has helped kick CES off with an announcement of sixteen new processors which span the entire spectrum: server, mobile and desktop. Of these sixteen, the only models to be offered this month are the mobile and dual-core desktop offerings. As speculated a few weeks ago, Intel will not be releasing their 45nm desktop Quad-Cores this month, due to AMD’s Phenom processors not being a true threat. As bonus to Intel, they will be able to further clear out their 65nm Quad-Core stock before unleashing 45nm.

This is a rather sizable blow to anyone who sat back for months already in order to pick up one of these. All three desktop Quad-Cores have been “pushed-back” to sometime in Q1, with March being the most likely target date. If AMD lowers the prices of their current Phenom line-up, then release might be bumped up.

For a refresher on the 45nm architecture and what Intel brings to the table with the latest releases, please refer to our QX9650 Quad-Core review from November.

On the dual-core desktop side, the offerings range from 2.66GHz straight through to 3.16GHz – all of which utilize a 6MB L2 cache and a 1333FSB. The E8190 and E8200 processors are the least expensive of the bunch at $163 in quantities of 1,000. The difference between the two is that the former does not include Intel VT or Intel TXT. 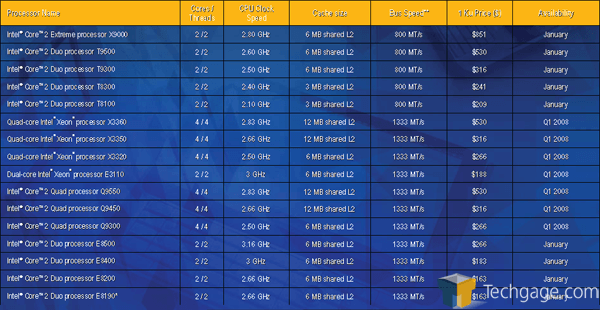 Mobile 45nm units are being launched immediately, so products on the market should be offering these now, or at least within the next week. There are some variances with the offerings here. Both the T8100 and T8300 offer 3MB of L2 cache, while the three higher-end models include 6MB. All five of the new mobile processors feature an 800FSB.

While it’s great to finally see some 45nm action on the mobile front, it’s too bad that we are still not seeing any quad-core offerings. This is no doubt due to potential major heat, and for most mobile warriors, two cores is perfect. Even still, it will be nice when quad-cores are offered, especially for those who use their notebook as a DTR.

The extreme mobile offering is the X9000, at 2.80GHz. This CPU is the only mobile solution for overclocking, and you can expect it to add around $1,000 to your notebooks price.

As a result of these new mobile launches, the mobile 965 chipset has been released as well. The primary feature of this new chipset is of course 45nm support, but also the new C6 power state. The chipset also features support for integrated video capable of handling both Windows Vista’s special graphical features and high-definition Blu-ray and HD DVD content. DX10 will be added to the chipset later in the quarter. 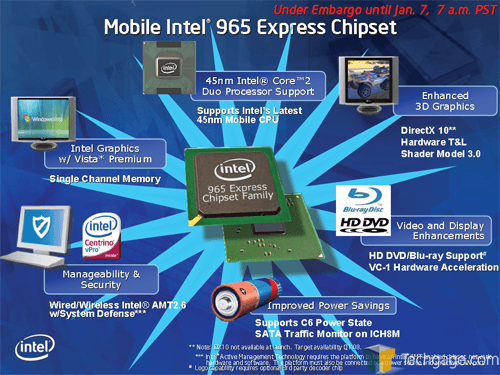 To reiterate the most important fact from today’s announcement, mobile and desktop dual-cores are the only offerings with near-immediate availability. Despite the Quad-Cores being pushed back to sometime in Q1, rumored prices have now been confirmed. The top-end non-extreme offering will be the Q9550, at 2.83GHz and $530. Replacing the current quad-core champ, the Q6600, the 2.50GHz Q9300 will retail for $266. The central offering is the Q9450 with a 2.66MHz frequency and $316 price tag. Again, prices quoted are in quantities of 1,000, so final cost to you will be a bit higher.

Lastly, mention of the Menlow platform has been made for mids and UMPCs, which includes the Silverthorne CPU, and promises 10x lower CPU power and 5x smaller package, when compared to similar products of 2006. We should be seeing an official Menlow launch in this half, with products available later in the second quarter. 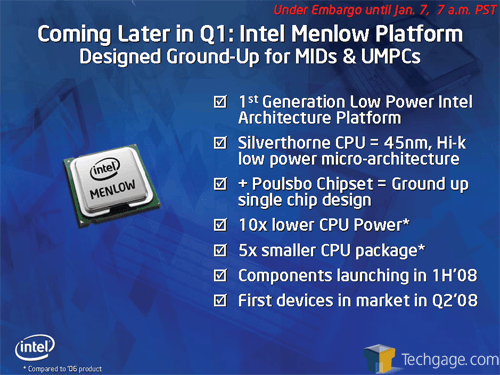 Be sure to keep checking back at the site during the entire CES conference as we will be relaying all of our findings to you.