Never ones to pass up an easy chance to get a jump on the competition, Logitech looked Monday’s start of CES in its eye and laughed as it announced its 2008 lineup a full 2 days before the doors officially open at the Las Vegas Convention Center here in Sin City. Sitting comfortably in a Venetian restaurant, we listened as Jerry Quindlen, CEO and fearless leader of Logitech, talked about the vision of the company for 2008 and not surprisingly, their announcements were impressive.

Starting with the MX5500, the cordless desktop bundle includes the vastly popular MX Revolution mouse along with a keyboard equipped with a small LCD screen at the top of the board giving the user information such as the date, email alerts, currently playing media and most impressively, calculator equations. For those of you enjoying (stuck with) Windows Vista, there are one touch features built into the board as well. Priced at $170 (US) and available later this month, look for the MX5500 to freshen up boring desks everywhere. 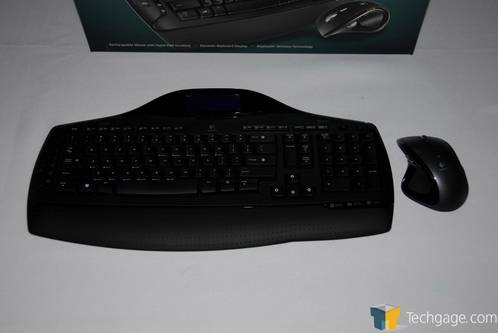 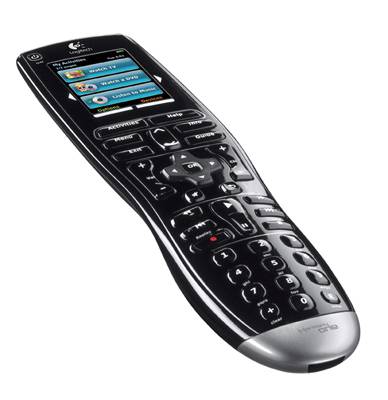 Taking the slender design of the previous Harmony remotes and incorporating the power of the Harmony 1000, the One comes equipped with a 2.2″ touch controlled screen at the top and 40 well thought out buttons below. Having handled this remote ourselves, the feel of the One is one of comfort and would feel nice in most hands. Like the remotes before it, the Harmony One uses Logitech’s online database of 225,000 products from over 5,000 different brands. The One also uses a rechargeable battery that is charged when sitting on its base. The Harmony One will retail for $250 (US).

For you speaker fans, the new Z Cinéma 2.1 uses SRS TruSurround to give it a surround like quality without the need for additional satellite speakers and unsightly wires. Connecting via a USB cable, the Z Cinéma comes with a Windows Media Center remote and a $300 (US) price tag. Like the Razer Mako we saw last year at CES 2007, the Z Cinéma shares similar specs and prices and should be available sometime next month. 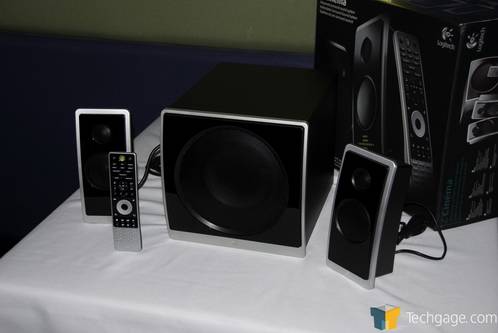 Not content with the Harmony leading the charge in the war for the living room alone, Logitech announced a new member the diNovo lineup that turned quite a few heads when it was announced. Logitech is positioning the diNovo Mini as the perfect coffee table Windows Media Center wireless keyboard with its small size and built in touch pad. 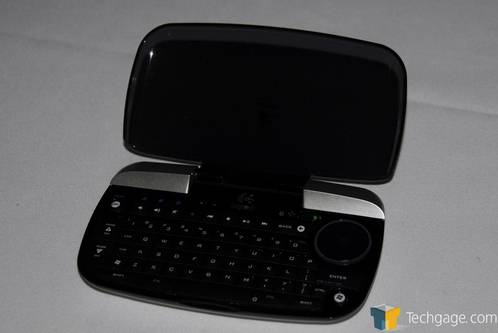 After holding the Mini for a while, its form is comfortable and the layout makes sense. The keys are easily reachable with either thumb and its weight if right as well. The previously mentioned touch pad can switch between a regular pad or a directional pad depending on the need of the application in use. No specifics on battery life but we were told that the rechargeable Lithium Ion battery should last up to 30 days on a single charge.

The last product mentioned, which was far and away the most exciting for me personally was the updated Squeezebox. Called the Squeezebox Duet, the media streaming device works fully on 802.11 b/g networks and is equipped with a sharp looking 2.4″ color display. When questioned if there were any differences between the current Squeezebox, the v3, and the Duet, from a strictly hardware standpoint, there are very few differences between the two. 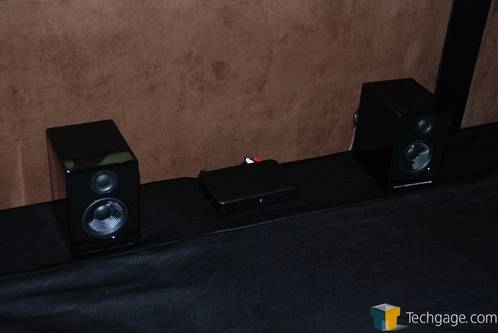 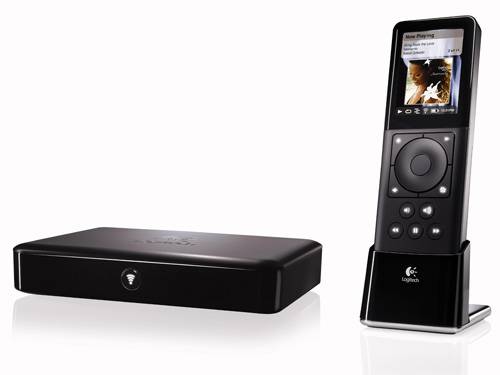 Logitech did decide to ditch the Burr Brown DAC in the Duet but other than that, the two are basically the same device. On the Duet though, the display on the box itself is gone and has been moved to the remote itself. By creating a remote that resembles a cross between a Sonos and an iPod, the Squeezebox Duet is expandable as well as multiple base stations can be places throughout your home and controlled with the one remote. The device can still not play DRM protected content but virtually every other format is compatible.

One piece of lovely information is that they are finally working with NAS manufacturers officially; eliminating the need to have your PC on all the time should you be running network attached storage on your home network. One more interesting piece is that the remote itself can be used as a music base station with it’s built in headphone jack. The remote along will run $300 while the base station will sell for $150. For those of you who still like the previous model, the v3, it can still be picked up for $300.

All in all, we left our meeting completely impressed with what we saw. Logitech has clearly spent a lot of time on the R&D of their products and in our little time with the devices, it shows. Look for our first hand reviews in the coming months.