At a CES press conference, ASUS unveiled a slew of notebooks well worth looking at, including the high-end NX90 multimedia notebook, featuring Bang & Olufsen speakers, the high-end G73Jh Republic of Gamers notebook, the Karim Rashid-designed Eee PC 1008P, and also a Bamboo-infused U-series.

At last year’s CES, ASUS had a great showing off of products, from the Eee PC Keyboard to the EeeTop PC (which I loved) to some of the sweetest notebooks around. The thing that became evident, though, is that despite producing a wide variety of products, ASUS was pushing mobile stuff like no tomorrow, not the enthusiast stuff we take a look at most often here at Techgage. if I had to guess, I’d assume that at last year’s CES, 90% of ASUS’ booth was mobile products. This year, it’s not looking too much different.

During a press conference held earlier today, the company showed off four main products, all of which were notebooks. I admit, it’s still a little difficult for me to fully accept the fact that mobile is the major push nowadays, which hurts a little bit given our enthusiast, and particularly PC components focus. But, mobile is here, and in all honesty, it couldn’t be more exciting of a time right now. With everyone making notebooks, though, companies have to be creative in order to appeal to this ever-growing audience. Of the four notebooks the company showed off, all are worth talking about.

The first notebook unveiled was the G73Jh, a Republic of Gamers model. As an RoG offering, it means that at its heart, it’s designed for gaming, and this notebook delivers all the goods, from a Core i5 or i7 processor to an ATI HD 5870 mobile card (this hasn’t been announced, but ASUS talked about it, hah!). In addition to it’s cutting-edge design, the G73Jh is designed in such a way that all of the heat is kept towards the back, where the user’s hands are rarely going to be. I’ve taken a look at Gxx RoG notebooks in the past, and I found ASUS to already do a great job with heat dissipation, so I’m excited to see how the G73Jh feels after a marathon gaming session. 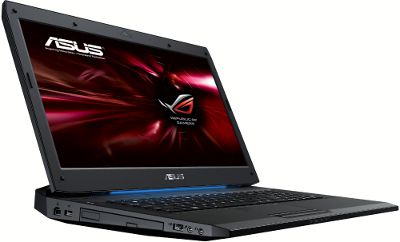 Don’t believe this could be the ultimate gamers’ notebook? In addition to its 17.3″ 1080p display, the G73Jh also includes not two, but four DIMM slots, supporting up to 8GB of DDR3 mobile modules. Because working, gaming or doing whatever it is you do on a notebook for a long period of time can become a painful endevour, ASUS has put a lot of time and effort in making sure the design of the G73Jh is ideal for long periods of use. When flat on a table, the keyboard is on a slight angle, releasing some of the tension of your wrists/hands while typing. I for one can appreciate this since I often get sore wrists when using cramped notebooks (this HP dv2 I’m using included).

For the saavy and stylish consumer, ASUS has always been about delivering notebooks you’re not going to be ashamed of using. Nowadays, some notebooks are considered a real accessory, and part of an outfit. To help appeal to an even greater number of people, ASUS hired legendary designer Karim Rashid to create an Eee PC design that sets it apart from all other notebooks on the market. The result is a Seashell design with a textured top and bottom. It’s the hood has a grid pattern with bumps at varying levels to create a cool shadow effect. It looks good, and comes in both pink and earthy brown colors, to appeal to both sexes. 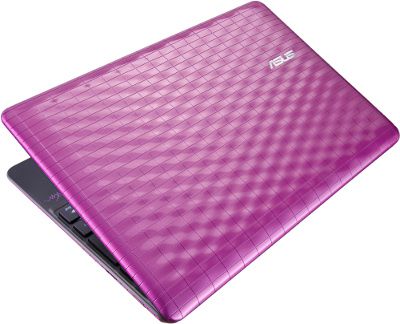 As an Eee PC (1008P) model, the models from the Karim Rashid collection don’t boast huge specs, but that’s to be expected. Packed in its small frame is Intel’s Atom N450 processor (dual-core), 1GB of DDR2, a 250GB hard disk, 10.1″ display with 1024×600 resolution (ugh!), up to six hours of battery-life and probably all the attention from other’s you’d probably want when owning one.

One area where notebooks have always struggled is in the audio department. Some include a rather robust speaker setup, with included woofers, but half of the time, there’s still not enough power or precision design in order to deliver an experience you can actually brag about. The NX90 is set to change that, and to assure that its chances are good at succeeding, ASUS brought legendary luxury products producer Bang & Olufsen to design the speakers to be used here, and I can assure you that you haven’t seen anything quite like this before. 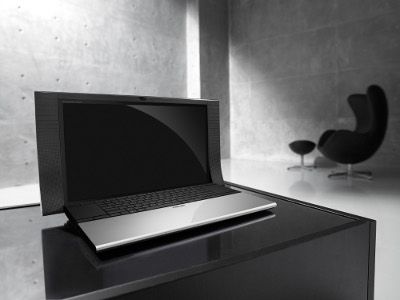 In what I believe may be a first, the NX90 isn’t a notebook that’s perfectly streamlined when closed, because the speakers aren’t built to fit within the width constraints, but rather are built into the sides of the screen, resulting in an extended width notebook. The hood is wider than the bottom, and with that, coupled with the fact that it’s a heavier notebook, it’s not at all meant to be portable. Rather, it’s designed for home use, where it will be used in a livingroom or another comfortable area in the home, when you want to compute anywhere but the “computer room”.

The speakers are designed to deliver the best audio experience ever, with music being it’s focus. Whether your musical preference be orchestral or rock, ASUS wants to immerse you in the experience, and give you a reason to use this notebook over a typical home speaker system (a larger system is obviously going to be much more powerful). ASUS’ Chairman and CEO, Jonney Shih gave an example of most professional speaker setups, where there’s no subwoofer involved… just two large floor units. That’s the idea behind the setup here, so there isn’t a woofer, just a straight stereo delivery (almost all audiophiles prefer this setup, not those with a flurry of speakers).

Aside from the unique speaker desgn, this notebook is designed to be a powerhouse. It will feature either a Core i5 or i7 processor, the HM55 mobile chipset, up to 12GB of DDR3 (you read that right), an 18.4″ 1080p display, an NVIDIA GT 335M 1GB and support for dual hard drives for up to 1,280GB of space (this will increase as the drives do). Overall, this is one heck of a monster notebook, and I can’t wait to hit the show floor and take one for a spin.

In addition to these three models, ASUS also showed off a notebook that makes heavy use of Bamboo in its design. The company touted being environmentally friendly, and with the use of such natural, renewable materials, it definitely helps. Unfortunately, ASUS didn’t mention any way that the notebooks could be recycled later on, whenever a consumer has outgrown them, but I’m hoping it’s something it will work on, because it’s all fine and good to have a notebook which uses natural materials, but it would be even nicer to be able to properly recycle it down the road.

Lastly, ASUS also showed off a work-in-progress technology called Waveface. This is a bit difficult to figure out, but from what I can tell, it’s meant to be technology to deliver infromation relative to you at any particular time. At a bus station? Your bracelet could tell you the schedule. Near a slew of restaurants but don’t now anything about any of them? Again, check out your Waveface equipped device, and information will be there. The goal of Waveface is to find and filter through information in order to give you what’s relevant, and put aside what’s not. It’s very interesting, but given the quick video we were shown, it seems like it will be a while before we see it become a reality.

This is all that ASUS showed off at the show, but there will undoubtedly be new PC hardware and other products on the show floor, so as soon as I find out about them, I’ll post all of the related information in our news section.