Are you looking for a quality sound experience at a great price? We are looking at Chaintech’s AV-710 card, which is based on the proven Envy24 chipset. Does it have what it takes to compete with the big boys? Let’s check it out.

When I was in the market for a new sound card, I immediately thought about buying an Audigy 2 ZS. To my surprise, friends kept telling me to get a Chaintech AV-710 instead, which costs less than half of what the Audigy does. So, I picked one up, played around with it for a week, and this review is what I thought of it as a whole. Here first, is a quick blurb about Chaintech.

Chaintech, the fastest growing motherboard, graphic card, and IA manufacturer in the world! While global tech sales have steadily decreased over the past year, Chaintech has had an astonishing growth of 23% in second half over first half of 2002.

What makes Chaintech so distinguished? In the past 17 years, Chaintech has devoted to develop the most innovative and customer-oriented products based on our most professional and experienced R&D team. Pioneered by our R&D team, everyone in Chaintech faces the dynamic and exhilarating IT market with alertness and global view. We work based on the principle of keeping everything the most up-to-date.

Before we go any further, here you can check out the card specifics:

For a sound card, one would not likely expect it to be delivered in such a large box, but Chaintech has done it! There is not many extras in there, but they definitely wanted the box to look good and informative. Once we tear it open, we unveil the card itself, a manual, CD-Rom and an optical cable.

The heart of the card is the Envy24 HT-S Chipset. The HT-S is capable of 24bit sound, with a 192kHz sampling rate. Here is what VIA has to say on their chipset:

For you die-hard audio junkies, who likely already know all of this, here are the Envy24 HT-S’s specifications: 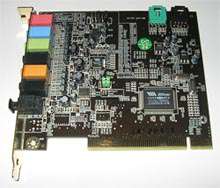 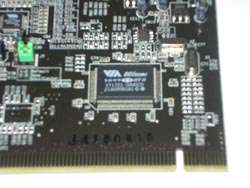