There’s very few games that allow you to be the bad guy, let alone an MMO! NCsoft is back again with a stand alone sequel to their popular City of Heroes game, and we are here to determine whether it’s worth the monthly fee!

Page 2 – First entry into the World


Upon first entering into the world, you find yourself inside of a prison. Oh great, now being in prison is a game! I had to go help out a fellow prison mate, because no doubt he deserves lots of help after his devilish deeds. He told me to go grab something out of a cabinet and return it to him, because apparently criminals are also extremely lazy. After running few more small errands, I wound up outside in a very blue world. I should mention, if you have played CoH before, you know exactly what to expect… it’s just a new area with a fresh coat of paint. You will already understand the game from the get-go. 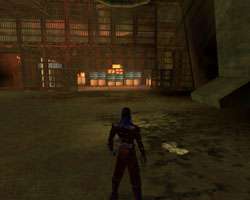 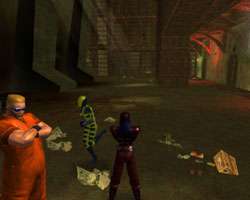 After yet a few more errands around here, you will finally end up boarding an airship to get you to Cap au Diable. I have to admit, this is very early on in the game, and the environments have already impressed me. The world is full of eye candy and a blast to explore. Now that I have landed in Cap au Diable, the fun really starts. I had to speak to Kalinda in order to proceed with a few quests to prove my worthiness, all of which could be performed solo. Your success may depend on your class and origin, however.

The fighting in the game is all real-time as you’d expect; You are able to throw a punch or a flame while the other villainous baddie’s beat on you. Although your villain is quite capable of running around at a fairly quick speed, I found trying to evade the baddie’s was not very possible. I had numerous instances where I had to run away from a battle and thought, “Oh, I will just jump up this incredibly large rock… they’ll never follow me up here.” How naive was I! If you can get to a certain area in the game, chances are good that the mobs can as well, so your only choice is to continue running until they lay off. 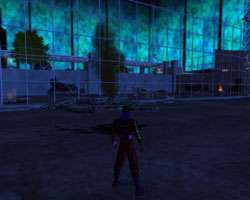 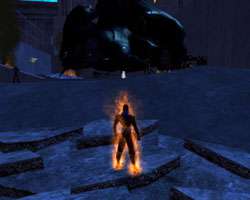 One thing I wasn’t too impressed with was the fact that when you hit a mob, it doesn’t even feel as though you did any damage even if you did. The problem I found was, that it was never immediately clear if you did any damage or not. Above the baddie’s head will be the -20 health or Miss!, but it wasn’t exactly *that* clear, and is hard to keep up to when you are battling more than one foe at the same time. Overall though, fighting was hardly boring, and the mobs have very cool techniques that they will use to take you down that makes you keen to keep on your toes and pay attention.

Back to Cap au Diable. This is an old town as you’d expect, and even though it looks very inviting… it’s not! There are numerous ‘baddie’s’ around that can take you out rather quickly, most being in larger groups. Chances are you will want to find a friend to help hunt around, but I managed to solo without many issues; I just had to be very careful. After I finally proved my worthiness, I wound up on Mercy Island. Here’s where I continued a few more quests for a dude named Mongoose. This city has been overrun by snakes and it was my duty to take them out! In the end, I went through at least 5 quests that involved taking snakes out. 4 were set in an incredibly similar dungeon, while one took place in a casino. Even after seeing the same looking dungeon over and over, it didn’t get immediately boring because not much time is spent in there.

One thing I actually did like about questing, is that I leveled while doing so. I may have gone into a quest needing 90% of my level, and come out of it needing 10%. The early levels in this game are really sped up if you just focus on the quests, because time flies without you barely noticing it.

I made my character level 10, and at this time I really found that progress was taking off. By this time, I had some great skills and could even hover! I found my way into a supportive clan and things were going great. What about later on in the game though? It’s pretty difficult to know just how great a game will be after a few days of playing, but let’s face it, we buy these games in hopes that we will be playing for months or even years.