Firaxis’ latest Civilization game came out a couple of weeks ago and was greeted by some rave reviews, but at the same time, there were some mixed-reactions to it amongst long-time fans. Me? I’ve never touched a Civilization game before, so here’s a fresh perspective… one I had to write while taking a break from the game!

I’ve been an avid PC gamer for about 20 years, diving into titles from pretty much every genre out there. Yes, even big rig simulators! Despite being open-minded with games, one genre I’ve for the most part avoided has been real-time and turn-based strategy. For various reasons, games like these just never captured my attention to any real degree.

There have been minor exceptions, such as StarCraft (the original) and WarCraft II, but since then, no strategy game has ever grabbed me. I tend to enjoy my games like I enjoy my music… not slow, and of course, “slow” is pretty much the bane of strategy games. It’s all about patience, and planning.

When StarCraft II came out, I gave into the hype and decided to try it. After about four or five hours, it was shelved… due to utter boredom. I am not saying the game isn’t good… but it’s not for me.

Last month, I caught wind of Civilization V‘s release, and while I didn’t think too much about it, I did query the staff to see if anyone was interested in taking it for a spin. Unfortunately, due to various circumstances, that couldn’t happen, despite two of our staffers being Civ vets. So, as the game launched, I became the one to give it a go, just to see if somehow, my interest could be held.

The fact that this review exists no doubt answers that question. What started out as a game I just wanted to dabble with turned into 70 hours worth of gametime in a three week span. Yes, I’m embarrassed to admit that, but hey, the fact that this strategy game managed to capture my attention while a game like StarCraft II couldn’t… that says something. I guess it’s not that I don’t like strategy games… I just never found the right one. 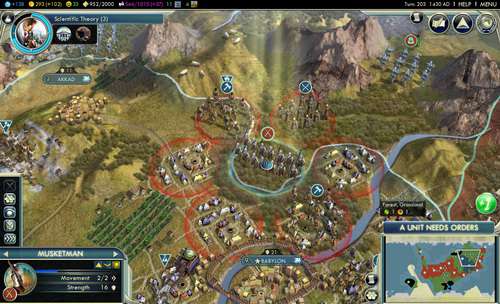 Because I’m new to the Civilization series, and also the genre as a whole, this review will be written from a mixture of two perspectives… to introduce newbies to it, and also to cover some of what’s new and notable for Civ fans. Despite not having played the older games, I’ll be making some references to some changes nonetheless.

The idea behind Civilization is simple… you play God, starting off each round with nothing more than a single settlement and warrior. From there, you must progress through time, learning new technologies, building new units and structures. And similar to a game like Sim City, you must make sure to keep your people happy and well fed.

As the game is turn-based, it’s similar to playing a board game with friends. One person takes their turn, and then the next person goes. This style of play is what makes the game somewhat slower-paced than most, but at the same time, it allows you to really plan your moves, which is something a game like StarCraft II doesn’t allow you to do.

The goal of the game isn’t so much realism, although for all intents and purposes, it is quite realistic. Many landmarks are included in the game as “wonders”, which you can build for your own civilization as long as you meet the prerequisite requirements. As Washington, you could build Stonehenge if you wanted to… anything goes in that regard. 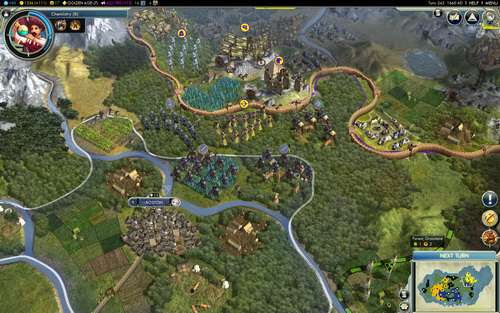 Of the eighteen or nineteen rulers available in the game (it’s nineteen with the deluxe edition), there are many that are almost expected to be included. There’s of course Washington for America, Napoleon for France and Elizabeth for England, in addition to Bismarck for Germany, Alexander for Greece, Ghandi for India, Hiawatha for Iroquois, Augustus Caesar for Rome and many more. Oddly missing from the game is Spain, which though unconfirmed, is likely to be fixed in some form of future paid DLC.

Each of the rulers feature unique abilities and special units, which means that some might be a detriment or help to your game depending on how you want to complete it. As an example, playing as Augustus Caesar gives the bonus of +25% production speed to buildings that exist in your capital (to be built elsewhere), and also two unique units… a Ballista siege catapult-like weapon, and also Legion, a front-line Roman attacker.

Once you begin a match, you will be able to immediately settle your first city, which in the aforementioned example would be Rome, and then begin to train new workers, scouts (for exploring) or other things. Regardless of the difficulty level you’re playing on, you begin out with a single warrior unit that you can use to help explore and get rid of Barbarians, which believe it or not, can be almost as much of a challenge as other civilizations waging war on you.

Before diving into Civilization V, I took a look at the details for the game and felt overwhelmed. As far as I was concerned, the game looked like one you’d really have to dedicate time to just to learn the basics (like a true flight sim), but after an hour of playing my first match, I was hooked. As the game progressed, catching onto all of the systems is something that just happened… there’s no real confusion along the way. I should note that at first, I didn’t even realize there was a tutorial available, so I didn’t have that benefit, but even so, I caught on quick, and would expect that to be the same for anyone. 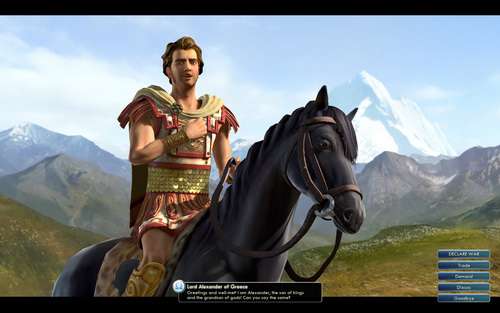 When Firaxis first spoke about Civilization V, it made it clear that the game was going to be more welcoming to newbies, and it might be for that reason that I felt enticed to give it a go. But despite that, the game is indeed very complex, but as you play you catch onto many of the most minute details… most of which are not super-important except at higher difficulty levels (such as customizing production focuses).

Being a complete noob when I first loaded the game up, I kicked off things with the first difficulty level, to help me ease into it. If you’re new to the series, that’s something I highly recommend, because I think if I started on a harder difficulty level from the get go, which I usually do, I probably would have been left unimpressed since I didn’t know what I was doing. The “Settler” difficulty is definitely the right choice for first-timers.

Unlike most games, which have a normal level progression, Civilization doesn’t. There are no set levels, but rather everything is generated on level load depending on various settings. This means that each map is going to be unique, and the chances of you playing an identical map to someone else would be absurdly rare. Because of this, it keeps things interesting, and each time you load up a new map, you truly have no idea what to expect.

Like most strategy games, Civilization’s maps have clouds dominating the world, requiring you to explore to see what’s beneath them. To not give you an exact idea of how large the map is, your mini-map in the bottom right corner scales depending on how much of the world you can see, which again, helps keep everything a surprise.

One of the biggest changes between Civ V and the older titles is that it moves to a hex-based tile format, which means as a unit, you can move one of six different directions. This is opposed to the square-based format of previous games. The hex change seems simple, but it makes the game look far more natural, and really blows the doors wide open for more complex strategies. 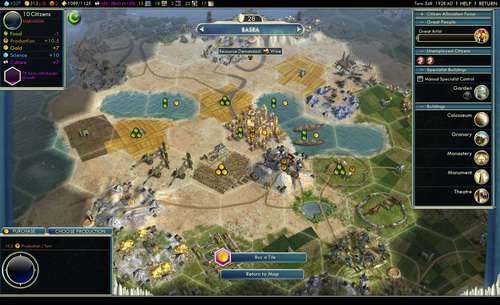 Since levels are generated on the fly, there is no such thing as a “level end”, so to help give each map some purpose, there are five different victory conditions you can work towards. The most basic is simply called a time victory, with the winner being the one with the highest score at the end of 500 turns (that’s the hard limit for winning a match, though you could play past it if you are the winner without any chance of a reward). The score is comprised of various factors, many of which I’m not even sure of.

The most common victory condition is domination, which requires you to conquer your foe or foes. This happens to be the simplest of conditions since it requires you to mostly focus on building your army up, without having to focus too much on other factors.

The other conditions are more complicated, but are far more interesting. To win a science victory, you must be the first one to research certain technologies and then build a spaceship. Make no mistake… it sounds simple, but it’s time-consuming and requires some sort of focus. There’s also a diplomatic win, which requires you to get far enough and research the correct technology to build the United Nations, then receive the majority of the votes. Votes can be influenced by how friendly you are with independent city-states (also new to V).

Without question, the final victory condition is the most difficult… cultural. The logic behind this one doesn’t make much sense, but what it requires you to do is earn enough “culture” to adopt different policies – policies that can greatly aide you in your goals. Some will decrease the unhappiness of your population, while others might reduce the gold cost of things. In total, there are ten main policy trees, with five sub-policies in each. Once you fill out five full trees (easier said than done), you need to build what’s called the Utopia Project. Filling out five policy trees is challenging enough, so to have a build that might require 30 or more turns to complete on top of it… the developers were clearly laughing during the design of that one. 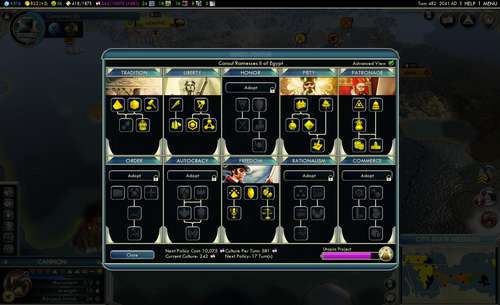 In talking to our Civ-loving Senior Editor Brett prior to my testing out the game, he mentioned that while he loves the series, his limited time makes it difficult to play, since when he comes back to it later on, he generally forgets where he left off. Well, at the time, I had no idea what kind of time he was talking about, but I quickly found out. On average for me, each victory took about eight hours to complete. Less of course on lower difficulties, but a lot of it also depends on the victory you’re going for, and challenges along the way.

In the time I’ve spent with the game so far, I’ve completed all five of the victory conditions, and also worked my way through the first five difficulty levels. For the most part, I think I have quite a bit of experience under my belt, so for the rest of the review, I will help round things out with my personal list of pros and cons.