Killer looks? Check. Detachable microphone? Check. Detachable cable? Check. Bling? Check! Customizable ear cup panels? Check. On the surface, CM’s Storm Pulse-R gaming headset ticks all of the right boxes as a LAN-ready, eSports-oriented stereo headset. But what is it like to live and play with? Let’s put them on and find out.

For better or for worse, one thing’s certain about Cooler Master’s new Storm Pulse-R gaming headset: It’s going to catch your eye. Not sure what I mean? Just look at it.

This isn’t Cooler Master’s first headset, of course. Its first two, the 5.1 surround sound Sirus and the stereo Sonuz, look like they share a lot of the same design DNA. They share the same austere gray color scheme, with similar rounded contours and egg-shaped ear cups. Plastic is the dominant material for both of these headsets.

The Pulse-R, on the other hand, doesn’t look like its older siblings. Instead of gray, it is black and aluminum; instead of the rounded contours, it has more linear shapes and chiseled surfaces. And there seems to be a bit less plastic in the Pulse-R’s construction compared to its kin. 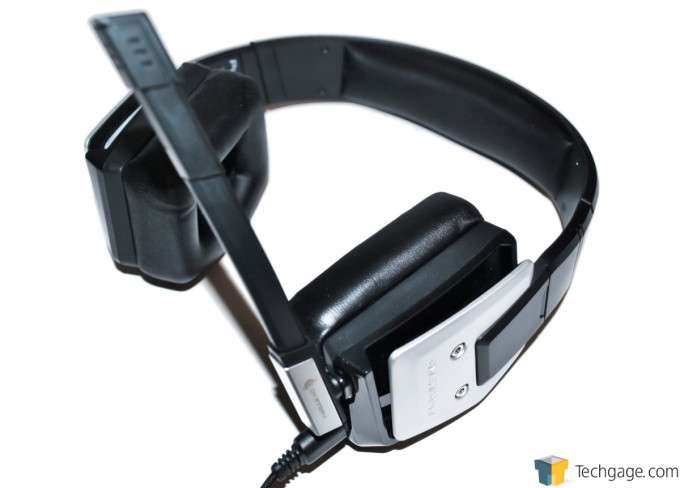 And it’s not just in looks where the Pulse-R deviates from the Sirus and Sonuz, so let’s have a closer look at its salient features. 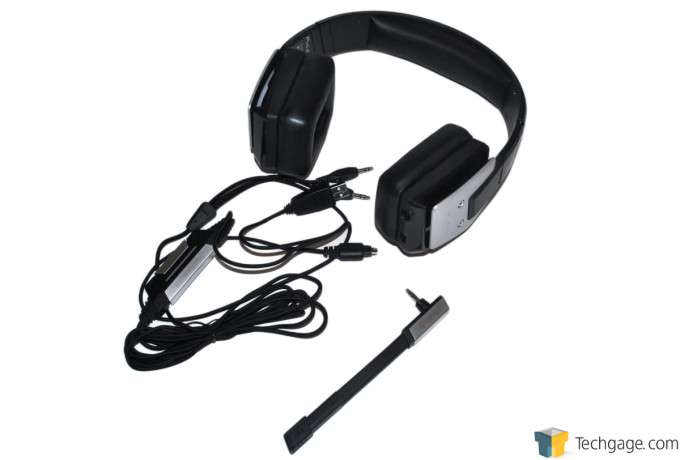 The Pulse-R is essentially composed of three interconnected components. There is the stereo headset itself, the detachable microphone stalk, and the cable. We’ll see each of these in turn.

First, the headset itself. 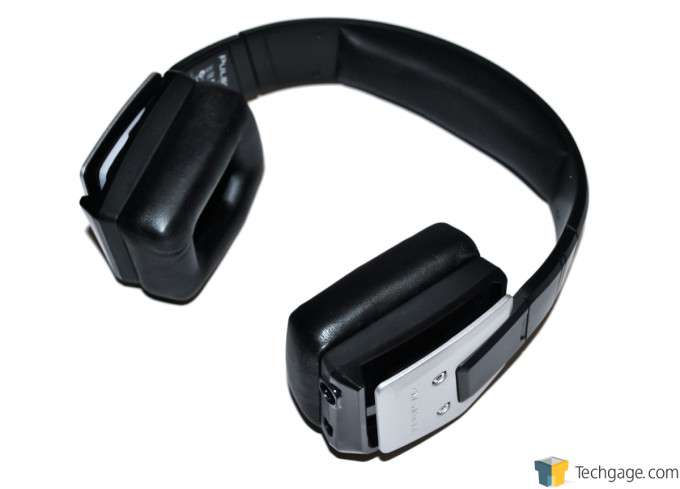 It’s obvious that the Pulse-R represents a deviation from the design path established by the Sirus and Sonuz. Aluminum is very much in evidence in the construction, and it’s even used as a visual highlighter on the Pulse-R. 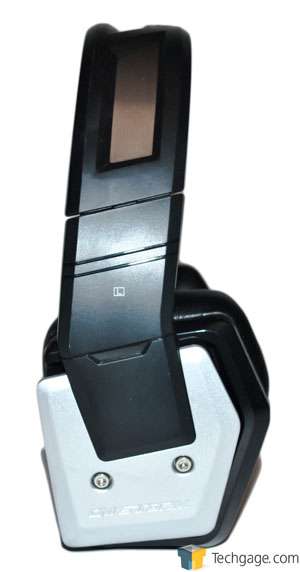 There’s a big piece of beveled aluminum adorning the outside of each ear cup. Mirroring the ear cups’ asymmetrical pentagon shape, the aluminum plates are definitely eye-catching and serve to break up the visual monotony of all that black. These aluminum plates can be removed via undoing two Torx screws; once these Torx screws are removed, the aluminum accent pieces can be painted, anodized, or covered up by vinyl stickers (perhaps depicting a LAN clan logo – Hello, Team Hello Kitty!). I can even picture having patterns or logos etched into these plates. Cooler Master intended these to be customizable, so how you do it is completely up to you. 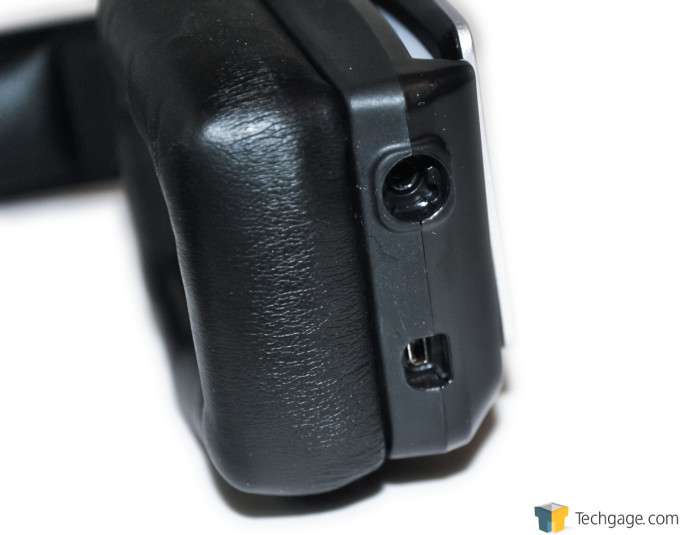 Under the left ear cup are two jacks. The round jack is a 3.5mm mic, while the one that looks vaguely like a mini-USB port is for the headset’s cable. The mic jack is keyed; you have to insert the mic stalk in, then twist until you can push it into its connection. It takes a big tug to remove the mic stalk, but you have to be careful that you don’t force the mic into its jack since the keyed structures are all made of plastic – it’s certainly vulnerable to damage.

The headset cable connector mates up with the cable snugly as well, so there’s very little chance of accidental disconnections. 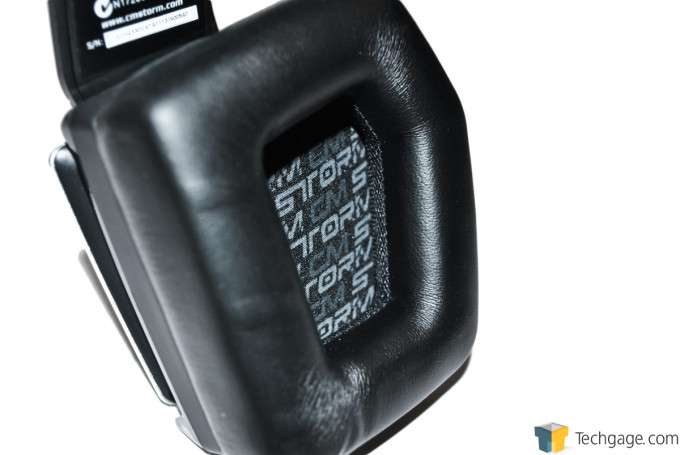 The ear cups each house a single 42mm driver inside, and are lined with a thickly-padded cushion covered by soft leather (or a very convincing imitation thereof). The ear cup’s insides are covered with cloth emblazoned with CM Storm logos.

The ear cups are mounted to the headband (which itself boasts more than adequate padding) via ball joints. These ball joints allow limited movement in all directions, which go a long way towards ensuring a good, comfortable fit. Speaking of the headband, it is constructed from aluminum as well, and sheathed in plastic, leather and padding.

Now let’s have a look at the microphone stalk. 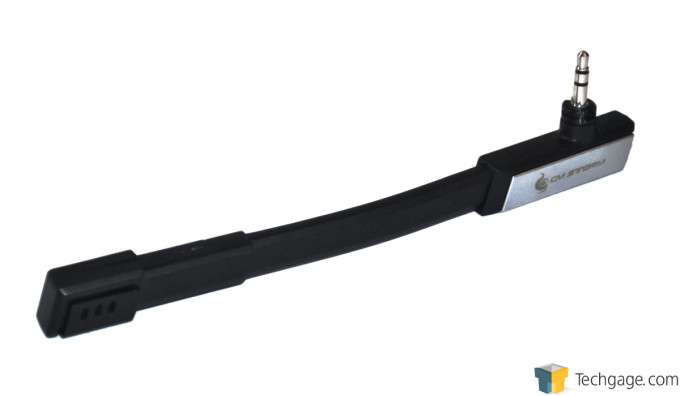 It’s simple enough, with the pick-up on one end and the 3.5mm connector jutting up perpendicular to the horizontal on the other. As mentioned before, the connector is keyed. The pick-up lights up with a white LED when it is active. The stalk itself is flexible along most of its length, so you can place the pick-up closer or further from your mouth as you wish.

Finally, let’s have a look at the cable. 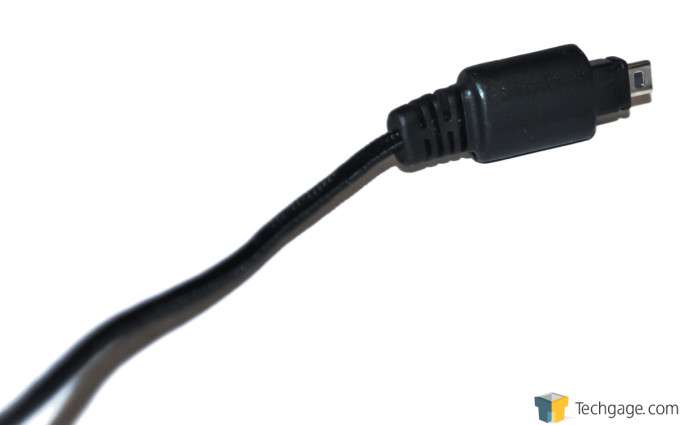 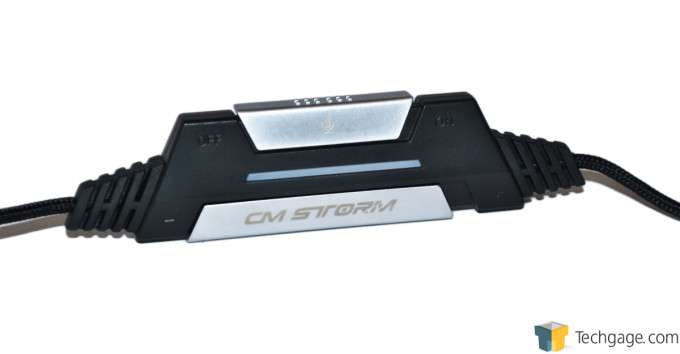 The Pulse-R is the first CM Storm headset to feature a detachable cable. I’ve only seen this feature implemented on more “serious” audio gear (my Shure SRH840 has this, for example), so it’s interesting to see the Pulse-R have it. After thinking about it a little, it’s a useful feature for a gaming headset, especially for gamers who engage in competitive eSports. eSports competitors (I almost wrote “athletes,” but stopped myself) travel with their gear from LAN battle to LAN battle: They can now stow their cables neatly, without fear of tangles or breakage.

The cable features high-quality braiding. It also has a usefully large inline control box; on one edge is a mic on/off sliding switch, while the volume control slider is on the other edge. The cable terminates in three connectors: The lime green 3.5mm connector is for microphone out, the pink 3.5mm one is for microphone in, and the USB (not gold plated, which is strange for CM Storm) supplies power to the headset’s LEDs. 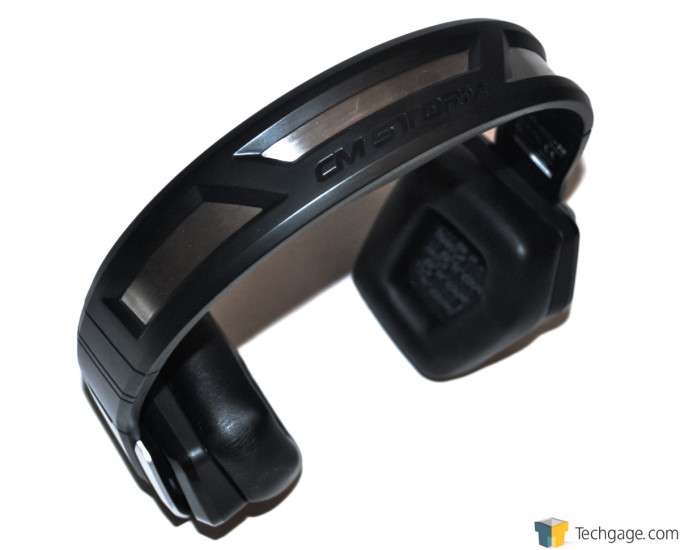 Speaking of those LEDs, they are white and mounted inside the aluminum trim pieces of the ear cups. The inline control box also lights up with the same white LEDs.

Now that we’ve had a good look at the Pulse-R, let’s move on to performance evaluations and then some concluding thoughts.