As we discovered in our review, Cooler Master’s QuickFire Rapid mechanical keyboard is a good one. But, it lacked a couple of things that some gamers (like me) demand. Such things include backlighting, a numpad, and in rarer cases, N-key rollover support. All of these things can be found on the QuickFire Pro, so let’s check it out.

Before I post a review for most peripherals, I try to use them for as long as possible to give them a good, thorough test. In the case of the QuickFire Pro, I only spent about a week with it, for a couple of different reasons. The main one is that the Trigger’s release is right around the corner, and I’ll need to be testing that one. That said, this sample will be making its way to my gamer brother, so if any long-term issues arise, I’ll be bringing them up.

In the time I did spend with the QF Pro, I’ve been left very impressed. Moving to a mechanical keyboard wasn’t a life-changing experience, but it was a very welcomed change none-the-less. I’ve reached the point where I’d rather use a mechanical keyboard now. A statement like that deserves some questioning, so why exactly do I feel that way?

First and foremost, it’s the responsiveness. On this KB, it’s actually too responsive if you are in the habit of resting your hands on some keys. In one MMO I play, I usually keep my hands hovered over the F1-F4 keys, so my palm inevitably rests on some of the lower keys. On this keyboard, I experienced occasions where I’d accidentally push some of those keys. This isn’t an issue per se, though if you are in the habit of doing the same thing, it does take some getting used to. 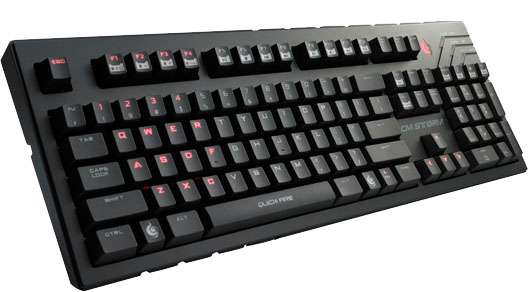 Of course, mechanical keyboards aren’t only known for their tactile feedback, but also their noise – and yep, the QF Pro is not quiet. As I normally type and game with music going in my ears, I don’t really mind the noise, but it is a little odd to realize that anyone near the room will hear me clickity clacking away. It’s not noisy to the point of ridiculousness, but it’s certainly noisier than any other keyboard I’ve ever used. Pro-tip: keep your mic far away from your keyboard when using Ventrilo or Teamspeak; your clannies will appreciate it!

One of the best reasons to upgrade to a true gaming keyboard is to gain the ability to use many keys at once without the worry that it’s going to screw up on you. The occasions where you will need to use more than four keys at once might be rare, but it’s nice to know that your keyboard will be able to handle it. This is especially important with games that don’t handle that sort of usage too well. In the past I’ve lost total control in Borderlands due to the issue.

To perform tests based around key usage, I pushed down a variety of keys in random configurations, using the two modes the keyboard ships with. “6-key” is essentially a default setting, whereas NKRO is the N-rollover that allows you to push many more keys at once. The results below were created by me pushing down on all of the displayed keys at once.

In the 6-key mode, pressing any more than 6 keys at once can result in a variety of things; the first six might display, less than six will display, or nothing will display. I’ve never had such a problem with the NKRO setting, and as you can see, in one result I managed to print out 26 keys at once. I think it’s safe to say that you are going to run out of fingers before you will the number of keys you can press.

The NKRO mode does however come with one caveat: it can’t be used outside of the OS; eg: POST. According to Cooler Master, this is a flaw, but not with the keyboard. Instead, it’s simply an issue with some motherboards and their BIOS (I haven’t tested the keyboard on an EFI machine). Switching between the two modes is very easy, however, and only takes about 15 seconds. The first time you switch modes Windows will install a second driver for the keyboard, as according to the OS, it’ll be a completely different model.

Even though I’ve been using the QuickFire Pro for less than a week, I’m sold. If I were in the market for a mechanical keyboard with this feature-set, I’d pick it up without hesitation. There are competitors, of course, so sometimes your decision will boil down to aesthetics. Of them all though, I think the QF Pro is one of the best looking models out there, if not the best.

What would keep me from purchasing the QuickFire Pro is that it lacks macro keys – a feature I require for my MMOs. That’s one of those things that won’t affect everyone, however, so if macro keys aren’t ever a requirement of yours, then this is a nonexistent complaint. One potential downside for some though might be the lack of a wrist-rest – and on a keyboard this high, that would have been appreciated. 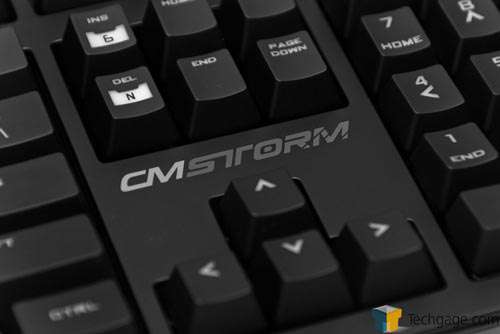 There is something else lacking on both the QF Pro and Trigger that drives me nuts: dedicated media keys. In order to change a song, you must hit the Fn key and then the respective F key. This is normally fine, but because the Fn key only acts as a toggle, using the media keys gets tedious after a while. On the right side of the QF Pro are three “Lock” status LEDs. As far as I am concerned, those should not exist, and instead, each Lock key on the KB should be backlit to represent the status. Who uses Scroll Lock and Caps Lock, anyway? I think most would agree that the space could have been better utilized for dedicated media keys.

I can’t wrap up this review without mentioning the LED backlight. There are a couple of different modes, and four levels of brightness. You are able to have only the WASD and other select keys lit, or most of the left-side of the KB (as seen in the top-most image on this page). If you so desire, the LEDs can pulse, rather than stay at the brightness you set them at.

Everything said, this is one of the best keyboards I’ve ever used, and if I didn’t care either about dedicated media keys or the macro keys, I’d pick it up in a heartbeat. At $99, the QuickFire Pro is very well-built, performs extremely well, and is a joy to use. Oh, and in case it matters, it looks good, too.