I’ve started off many peripheral reviews with a little spiel about how companies who have established themselves in one market are branching out into others. It’s something that we see more and more everyday and that’s exactly where we are again with this review.

Cooler Master, which has been a case manufacturing juggernaut for as long as I can remember, has released several successful and well performing models of gaming mice and most recently a gaming headset under its CM Storm brand. Up until now the keyboard market has remained untouched but the CM Storm portfolio is being expanded with the launch of the QuickFire Rapid mechanical gaming keyboard.

Moving onto the QuickFire Rapid itself there are two flavours available; the standard silver version that could ship with either black, brown or blue CHERRY MX switches depending on the region and the Red Switch version, which features exactly that along with an all black exterior. Regardless of the type of switches, they are all rated for over 50 million keystrokes.

Our review sample was the standard version so we’ll start off with an overall look. The exterior features the same “soft touch” rubberized surface carried over from the CM Storm gaming mice. Right off the top most will notice that the number pad is missing, which gives the QuickFire Rapid a compact footprint. This further classifies the keyboard as a gaming keyboard seeing how while many people including myself use the number pad very frequently for day to day use, I can’t recall the last time I used it for gaming. MMO gamers, however, might shudder at the thought. The smaller size also makes it ideal for gamers on the go. 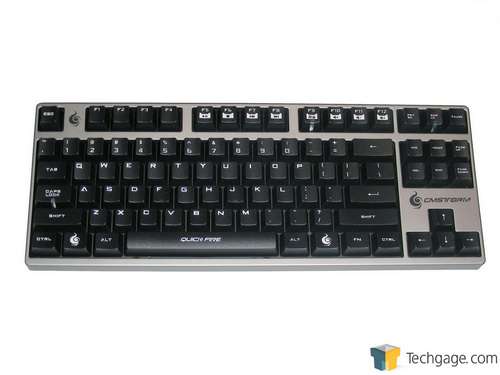 On the outside the keys are standard fare and sit above the keyboard body, so those looking for a low travel, scissor switch feel more in line with a laptop, you will need to keep searching. The keys are nicely sized with none of them squished in or reduced to make room and the characters have been laser-marked instead of using lower cost pad printing.

The keyboard features a 1000mhz/1ms response time when used in USB mode and being geared towards gamers offers “anti-ghosting” to allow for several keys to be pressed at once without interrupting input. For those who plan on connecting it via PS/2 it also features N-key roll over, which in the most basic explanation could be considered anti-ghosting for that form of connectivity, but on a much larger scale. 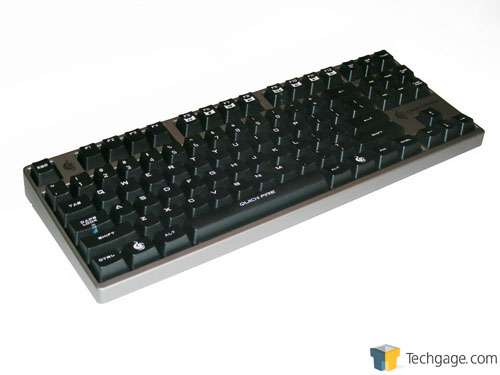 The function key labeled “FN” activates the secondary multimedia functions for keys F5 through F12 such as play, pause and the volume controls. For those who press the Windows key at inopportune times it can be disabled with the secondary function of the F9 key, but this is also done automatically once a game has been launched. When the Windows key is locked a red LED shines through a translucent insert that’s also found on the CAPS LOCK and SCR LOCK keys. 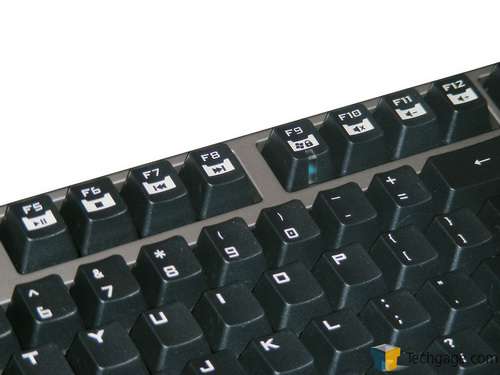 Even though I could tell which kind of switch was used with a simple keystroke, the box we received had a sticker on it. This will bode well for someone looking for a particular kind of switch based on their preference. With the pesky A key out of the way one of the CHERRY MX blue switches can be viewed. The blue switches feature low resistance, tactile feedback and give a click with each press. Just for fun I went on the hunt to see what people thought of this type of switch and found a few posts where they said to be better suited for typing, while black and red are better for gaming and brown is more middle of the road, but we’ll see about that. 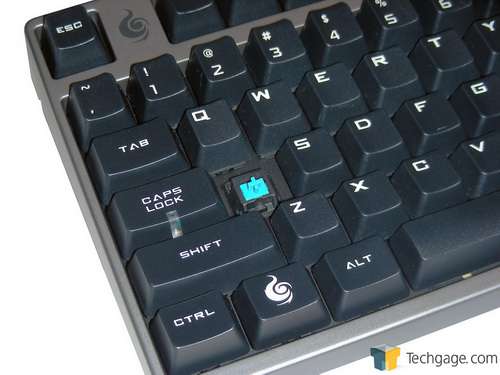 A recessed area on the underside of the keyboard houses the port for the detachable cable. There are also left, right and center channels that allow for the cable to be run where it is best suited depending on the user’s setup or preference. 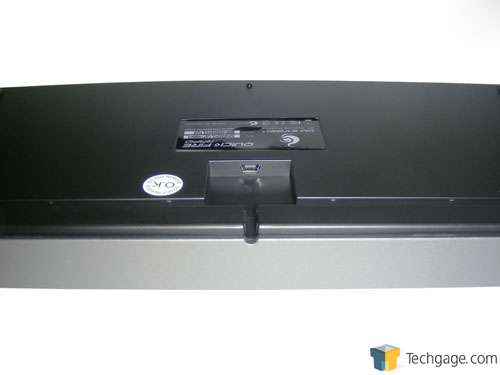 On each of the corners are the standard flip feet to raise the profile of the keyboard and rubber pads in each of the four corners to protect the surface it rests on. 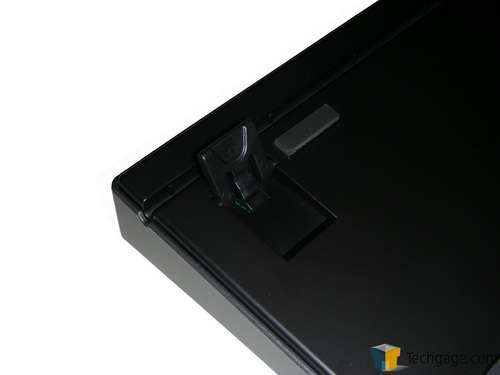 Included with the QuickFire Rapid are the key removal tool, red replacement WASD arrow keys and two black Cooler Master keys – all of which use pad printing for the labels. There is also the braided USB cable similar to what is found on some of the other CM Storm products, a PS/2 adapter and the user guide. There’s no macro support for this keyboard so in turn that means no software CD is included. 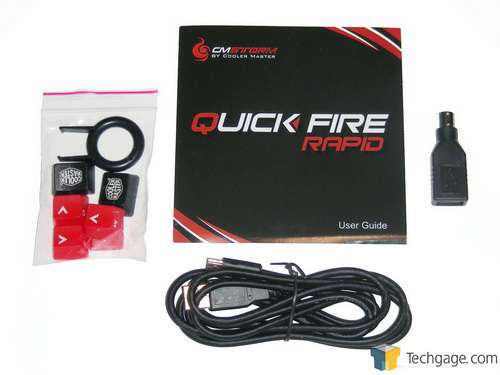 What better way to truly test out a keyboard than to use it while writing the review along with a little gaming sprinkled into the mix for good measure? Up next is my experience after using the QuickFire Rapid under some fairly heavy typing and some light gaming over the course of a week.