At the end of the week I was left extremely impressed by the QuickFire Rapid. It screams quality when your hands are on it, but when they aren’t it chooses to sit there on the desk without any of the flashiness found on other CM Storm products. It’s kind of like the cool kid who knows they’re cool but doesn’t have to prove it.

The keyboard is rugged, well designed and performed extremely well during my typing and gaming sessions with all keys right where they should be. Too often manufacturers will sneak in special keys at the expense of others or will give the keyboard a custom layout that might take some time to get used to, but the QuickFire Rapid follows the tried and true configuration. Almost.

The missing number pad is sure to turn some away immediately, especially those who do as much typing as gaming, but I can’t take away points for the design. It’s not as if the box art shows it’s included and when you open the box, surprise! No number pad! For those who just can’t get past this the CM Storm Trigger was announced in June of last year on the official CM Storm forums and features the same high-end switches found on the QuickFire Rapid but with the number pad and some other bells and whistles, so stay tuned for that if it’s still a go. 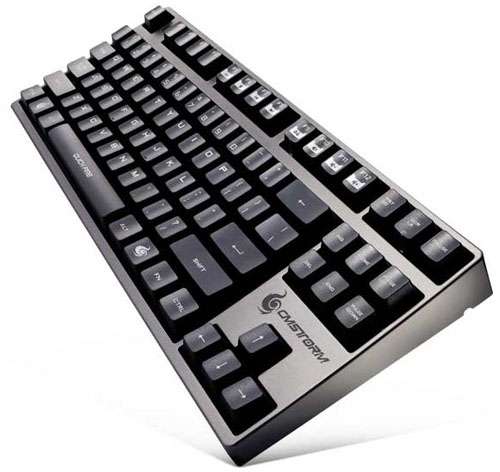 Most modern gaming keyboards generally include macro support and some of the more hardcore gamers will be put off by the fact that the QuickFire Rapid doesn’t. As I said I don’t tend to use macros anyway so it wasn’t a make or break feature, however it does give off the feeling that the keyboard is almost too simplistic as macros always just seem to be available.

The only design change that I would like to see would be an increase in the amount of room where the cable connects on the underside of the keyboard. The area is cramped making the initial connection a little tough and unless extra slack is given the connection can be pulled off kilter if routed to the sides. The channels could have also been made just a hair wider to allow the cable to be pushed in with greater ease, but these are minor changes that did not hinder usage. 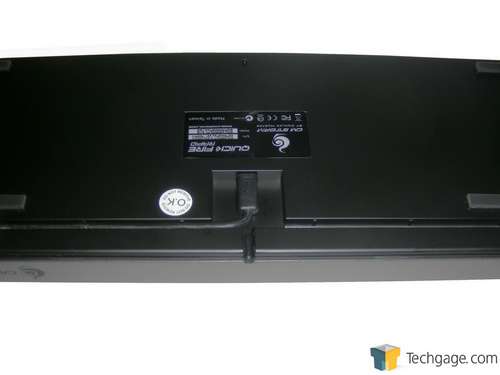 The QuickFire Rapid has performance locked up tight so that ultimately leaves personal preference, which when it comes to keyboards is just as big of a factor. Remember that different types of switches will be available and that the black, brown and red switches perform differently than the blue ones did in this review. Normally a review aims to be the leading source of information on a product but due to the variety of switches available this one is not the be all, end all.

I recommend that all potential buyers do some research on the type of switch that will best work for them based on their preference. This will allow them to pick up a keyboard that will work precisely the way they want while not sticking them with a bill for ~$80 bill when they can’t return an open box item.

I’m currently a happy user of the CM Storm Sentinel Advance mouse and Sirus headset so when I heard that a keyboard was being launched I was excited to say the least. Thankfully I haven’t been disappointed. The QuickFire Rapid is a great first offering in a market segment that can be won or lost on even the most minute details.